Day of acknowledgements on Aitutaki 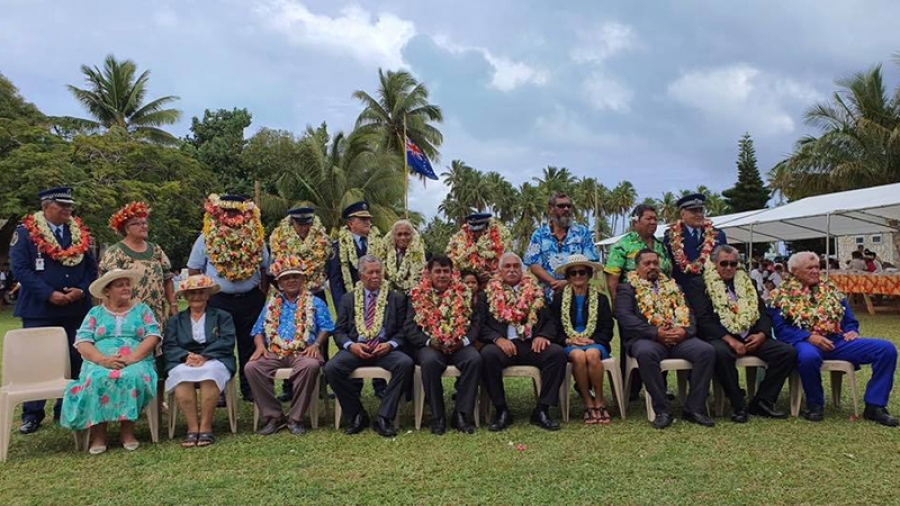 A large group of officials including Prime Minister Henry Puna gathered in Aitutaki to mark the inauguration of the Mayor and Island Council members. Photo: SUPPLIED. 20090819

Prime Minister Henry Puna and Minister George Angene attended the official inauguration of the Mayor and Members of the Island Council of Aitutaki held yesterday.

Formalities started with the official swearing in of Mayor Tekura Bishop and his Council members, followed by Tetava’s presentations.

A significant milestone was recognised with the Commissioner’s Silver Award for Senior Sergeant Tukua Putu, who was farewelled after 42 years of service with the police.

In addition, Senior Sergeant Kau Henry was promoted to senior rank and officer-in-charge for Aitutaki.

The commissioner also presented two community awards. The first to Mayor Tekura Bishop and his council and the other to Ngatokorua Rota for his outstanding leadership of the Are Nikau Taskforce.

The Taskforce was established as a response to the Covid-19 pandemic but has worked closely with police in the promotion of road safety and incident prevention.

The Prime Minister participated in the official handover of a police truck, which was presented to Bishop before Senior Sergeant Henry took possession of the keys.

The truck was transferred to Aitutaki Police with the kind help of Taio Shipping.

Bishop gifted carvings to retiring Senior Sergeant Tukua Putu and Commissioner Tetava on behalf of the people of Aitutaki.