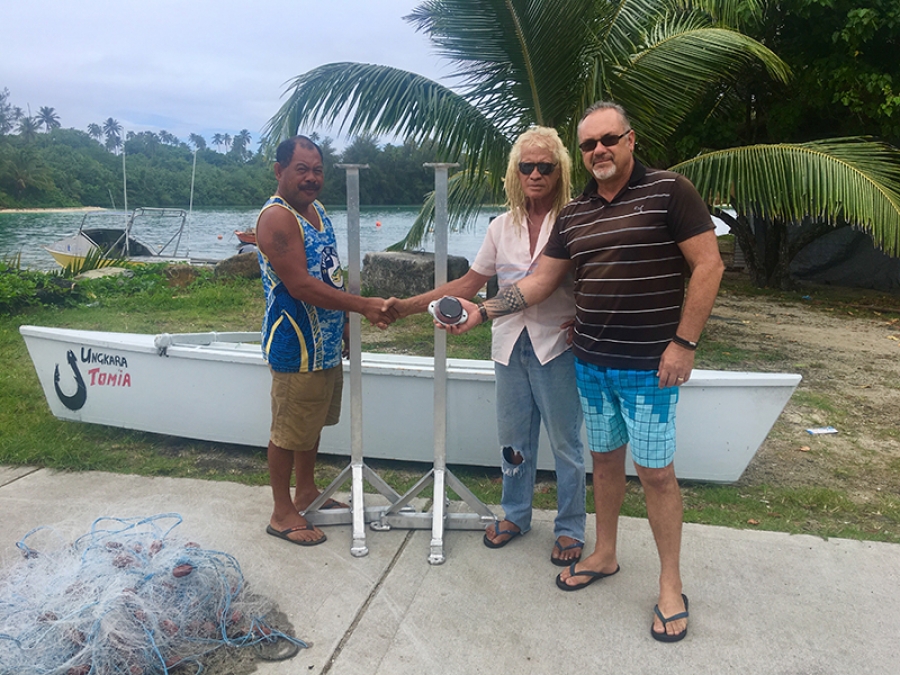 Fears for the safety of fellow fishermen on an outer island have prompted a Rarotonga club into action.

“It’s because we really care, we care about the safety of the Mitiaro fishermen who go out in their outrigger canoes and I felt we had to do something that would help them,” says Avana Fishing Club president Tamoko Maru Ben.

Mitiaro wharf has been without beacon lights since August last year. The beacon lights are critical for guiding fishermen back to the wharf at night. Without them, attempting to return to shore in the dark, particularly if the weather turns bad, can be extremely dangerous.

Ben says often Mitiaro fishermen would be forced to remain at sea waiting for daylight as trying to return was just too risky. “Can you imagine being out at sea for several hours, it’s cold, it’s wet and you’re bouncing around in rough seas in a small canoe?”

Ben says the Mitiaro fishermen had tried to get the beacon lights replaced but came up against a wall of bureaucracy. “Things just dragged on and on for the local fishermen, so we decided to do something about it.”

AFC members who visited Mitiaro were told that the local fishermen were advised by the Island Council to put a proposal together, with a design for a fixture to attach the lights to which would then be submitted to New Zealand. The Mitiaro fishermen weren’t sure why the proposal needed to be sent to New Zealand.

“This is a matter of replacing old harbour lights rather than reinventing the wheel,” says Ben.

AFC members sourced the beacon lights locally, and the brackets to which they will be attached to were also made locally by Raro Welding who delivered the rustproof equipment at a discounted rate.

“The boys at Raro Welding have been very helpful and we thank them for their support.”

Ben added that the lights and two brackets cost just under $2000 – “it’s a small cost for such an important piece of equipment that helps keep fishermen safe.”

The equipment was presented to the president of the Mitiaro Fishing Club Makara Murare who was visiting Rarotonga with the islands’ team for the Tangi Korero inter-school competition.

Murare says the generosity of the Avana Fishing Club was “so amazing.”

“We fishermen have been waiting for so long that some of us just gave up that the lights would be replaced. No one seemed to understand or care that it’s dangerous without working beacon lights.”

He says the Mitiaro Fishing Club was fortunate that Ben has been in Mitiaro for several weeks on a building project and, being a keen fisherman himself, soon found out about the problem. “It didn’t take him long to sort it out for us, with the help of other members. We are so very grateful to the Avana Fishing Club,” says Murare.

The Mitiaro Fishing Club will be holding its first fishing competition this Saturday and next Monday.

Murare says it is nice feeling knowing that the fishermen and their families will also be able to bless their new lights and brackets at the inaugural competition.

AFC is planning to travel to Mitiaro next year to attend the 2020 fishing competition.