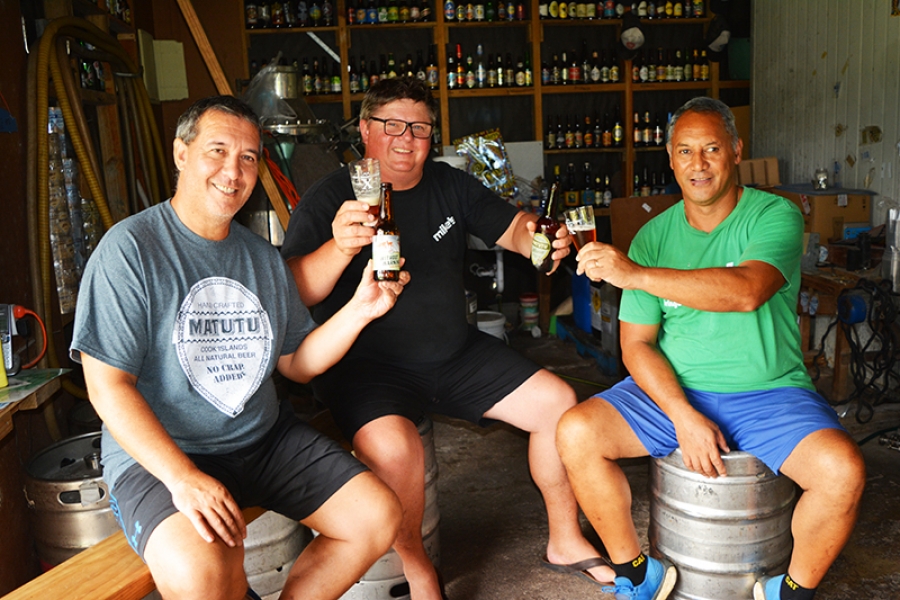 You’ve got to be careful about getting a bunch of beer brewers talking – the conversation is bound to range far and wide, and it can be difficult to get a word in edgewise.

In the case of Matutu brewers James Puati and Eric Newnham, joined at their Tikioki brewery by visiting Kiwi brewer Ron Trigg, the topics of talk include everything from deep-sea mining to the enzymes in human saliva.

Trigg in particular is especially loquacious. A first-time visitor to Rarotonga, he turned up on the Matutu doorstep a few weeks ago and became something of a semi-permanent fixture at the local craft brewery until his departure last weekend.

“He came bearing gifts,” says Newnham, referring to a selection of beers Trigg brought with him from his own Mike’s Brewery in New Zealand.

“And when guys like us who have only been on about a three-week crash course on how to brew beer 12 years ago, get guys like Ron here, you pull them in man,” says Puati.

“You take them out to dinner and pick their brains,” adds Newnham.

Trigg is the owner-brewer of Mike’s Brewery, said to be the oldest craft brewery in New Zealand. It has been around almost three decades now since it was started up by Mike Johnson in 1989.

Back then it brewed only one beer, Mike’s Mild Ale, apparently once praised by another well-known Mike, last name Jackson. This could well be a bit of an urban legend however, as the mind boggles at how the most famous pop star in the world would ever have got his hands (or lips) on a beer from the tiny Taranaki brewery.

Eventually bought by Trigg in 2007, not too long after Puati and Newnham founded Matutu in 2006, Mike’s Brewery now produces up to 40 different beer varieties, although Trigg says they’ve only got about a dozen on the go at any one time, with a “stock-standard” range of six core beers.

He was well aware of Matutu Brewery when he landed in Rarotonga.

“It was only our second day here and we were already checking it out.”

He recalls having tasted their specially brewed Maeva Ale when it won a bronze medal at the New Zealand Beer Awards in 2015.

“Matutu was always on my list to come and check out,” says Trigg, explaining that his visit to the Rarotonga brewery is all about what he calls “cross-pollination” and learning from each other.

“It’s just a question of working together,” he says. “I’ve had a look at the way the Matutu guys are doing stuff, and there are places I think I could help them, and places I think they could help us, so collaboration is probably our biggest thing.

“So we’ll work together on ideas for a brew and try and do something that’s a little bit unique. That’s the big thing with the craft beer industry everywhere in the world really – it’s about innovation and just pushing the boundaries.

“We’ve been talking this morning about noni fruit and starfruit – there’s got to be something in there somewhere.”

In addition to working on some possible new beers with the Matutu brewers, Trigg has also indulged himself in a few of their existing brews.

“One of the beers I tasted here the other day just blew my mind,” he gushes.

“The coconut vanilla stout – outstanding. We brew similar beers to that, but quite differently. And if you’re going to brew a coconut beer this is probably the place to do it!”