Stanford students journey of a lifetime 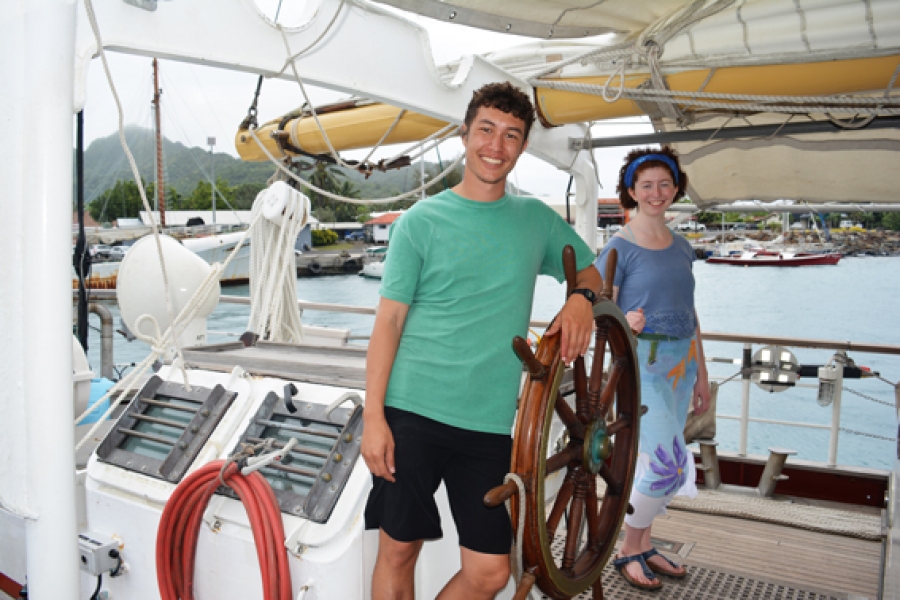 Students Mike Burnett and Madeline Lee have just under four weeks left on board. 17052333

The vessel was scattered with local fisherman, and Rarotongan residents and students who were interested in learning more about SEA’s latest oceanographic research cruise.

With 21 students from Stanford University, California, 10 crew and a science team on board, the vessel is almost at its full capacity with 38 on board.

SEA chief scientist, oceanography Professor Jan Witting said the vessel has been a hive of activity and hard work, taking the students from Papeete, Tahiti, to Rarotonga, Palmerston, Tonga and finishing up in American Samoa.

“The semester-long programme focuses on marine biology and marine policy, sailing and essentially our relationship with the ocean.

“For most of the students this was their first time on board a vessel like this, so they have been learning the ropes, literally,” said Witting.

It was said the students were mentored for five weeks “on land” prior to their voyage and stepping foot on the boat.

Upon boarding, CI News was offered a tour of the vessel, in which found itself in Rarotongan waters for the very first time, much like most of the students on board.

Stanford University students, Madeline Lee and Mike Burnett were among the few students left on the ship who weren’t sleeping or exploring Rarotonga, and were more than happy to show a CI News reporter their temporary home.

Sleeping four people in quarters no wider that 2.5 metres, the students have found adjusting to many aspects of their new home difficult.

The students explained that the group was split into three groups, in which they work for six hours segments.

The vessel is never left un attended, which means some students find themselves working from 1am-7am, then using their 12 hours off; sleeping, eating and going to class. Then the students are back to work at 7pm that day, working till 1am the following morning.

Having been on board for just over seven days, the students said their first week on board had been both trying and extraordinary.

“For each person they have found different things difficult, some really haven’t found their feet and are finding the sea sickness a little overwhelming, while others have struggled with the shift work,” said Burnett.

“But I think the feeling you get standing at the bow of the vessel, alone, staring out into an empty sea in the middle of the night is so powerful,” says Lee, an English major who previously studied science and had been anticipating her time aboard the ship for two years now.

The students agreed that so far, their experience aboard the Robert C Seamans has been a monumental learning experience, both rewarding for their studies and individual development.