Is it possible … a classroom of QUIET teenagers? 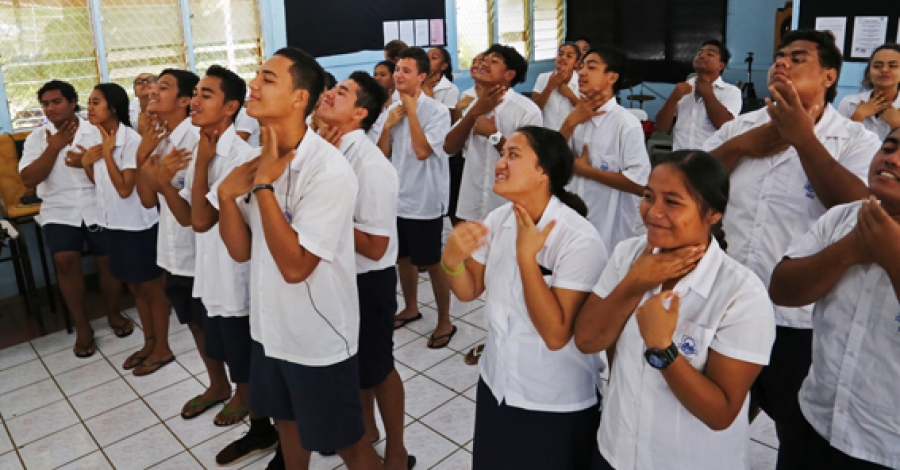 The cause of the student entrancement was the amazing harmonies coming from three visiting opera singers as they sang a song called Hine.

The combined Year 10, 11, 12 and 13 vocal students just sat there in amazement as the beautiful sounds floated around their classroom.

Manase Latu, Samson Setu and Keani Pora had been giving the young singers tips on how to better prepare for a performance. They are on Rarotonga to perform two recitals at The Islander Hotel on Friday and Saturday nights.

That included correct posture and how to breathe properly.

And there was plenty of humour as the teens copied the exercises, even though some of them looked embarrassed to do it.

The young lads warmed up to the tasks during a vocal session called Sirens, where everyone needed to sing from their lowest notes to the highest they could reach - which ended up like a class full of fire engines.

Keani told them: “It may sound funny, but don’t be afraid to sound dumb.”

Then they were told to sit down and were sung Hine, which they were about to learn and then perform themselves.

Well, they were awe-struck. Not a word was said, not the slightest hint of clowning around and only three mobile phones filming the trio in action!

When the song’s last notes faded there was an eruption of applause and it was if a light had shone on all their faces.

Next up it was time for them to divide into three groups. The girls were led away by Keani to practise their part of Hine, while tenor Manase took the higher-voiced lads outside and baritone Samson worked with the deeper-voiced boys in the classroom.

Within about 30 minutes they had learned their parts and were brought in to perform.

It was an astounding display of vocal skill.

In fact, it was so good they were asked to sing again and gave an even better performance.

These kids really have potential and are a credit to themselves and their teachers.