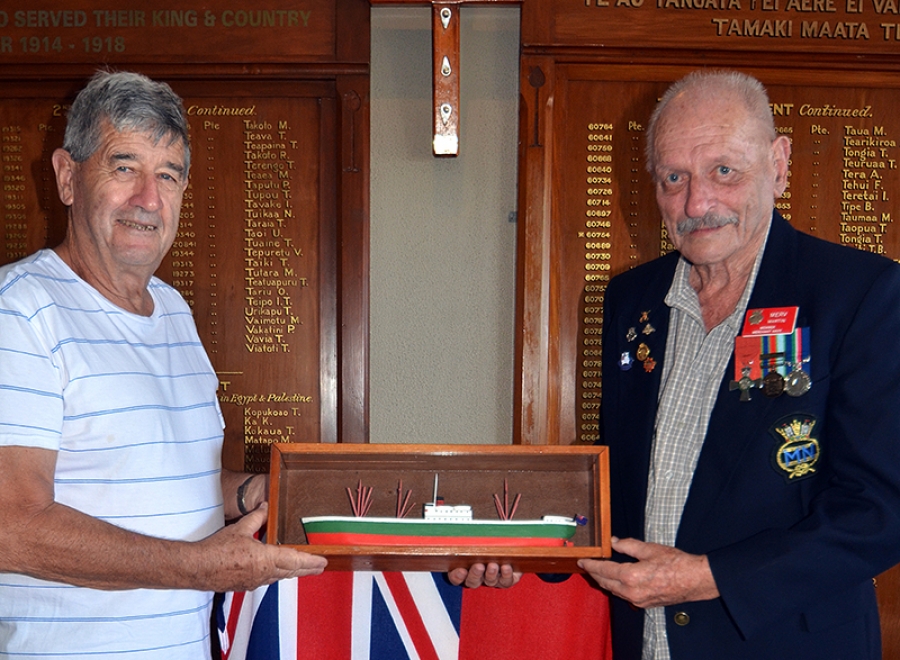 RSA club president Denis Dwane accepts the gift of a model of the SS Waitemata Union Steamship Company of NZ from ex Merchant Navy man Merv Martin, in celebration of the recognition of the fourth service. 18091121

Long after World War Two finished, many war heroes continued fighting their own battle - to be recognised as part of the New Zealand armed services.

The three services, the army, navy and air force had always been recognised in the terms of the ANZAC Act, but the Merchant Navy, the “workhorse of the war”, had not shared the same rights and recognition.

That changed, however, in 2015, after Merchant Navy man Merv Martin campaigned to have the service recognised. He is back in Rarotonga celebrating a battle won.

Martin says it was the New Zealand Ministry of Defence, together with Governor General Lieutenant General Sir Jerry Mateparae, who finally agreed to change it. At the Merchant Navy commemoration day in Wellington on September 3, 2015, Mateparae said: “I like to think the same qualities have been evident in all the men and women who have served New Zealand; much is known of the endeavours of those who fought in our three armed services. Today we acknowledge New Zealand’s ‘fourth service’, the Merchant Navy.”

“That was a great day for us,” says Martin who had been fighting for the change since 2000. “I got there by making a bloody nuisance of myself. I had to. And I was recognised on the honours list for my work. I was the mainstay in pushing it through.”

With the recognition came a new organisation, the Merchant Navy Association of New Zealand.

“Merchant ships were privately owned and their sailors were civilians unarmed and without uniform,” says Martin. But the ships were the vital supply link for food, weapons, ammunition and troops. We were the workhorses of the armed forces.

“I was a fireman, or ‘oil burner’. Britain and Russia were starving. We had to get convoys out to them. New Zealand (alone) lost eight merchant navy ships in World War One and eight in World War Two, but we can only estimate how many seamen were lost, because the vessels were commercially owned and defence did not keep their records.”

Martin, who has family in Rarotonga, came here seven years ago to start Merchant Navy Day on September 3.

“This was the day of the first Merchant Navy casualty of the Second World War when the passenger liner Aphenia was sunk off the coast of Ireland, with mostly women and children aboard. Merchant Navy day is now celebrated in Rarotonga every year on September 3.

“There were a number of Rarotongan seamen in the Merchant Navy and the ship Moana Roa was exclusively assigned up here.

“I came up here on the Waitemata on its way to Vancouver. That’s when I first got attached to the island: that was in 1955. I met my then-to-be sister-in-law and asked her if she could buy me some beer. She came back with (beer made from oranges). It had a kick like a mule.

“All those ships have gone now - the Union Steam Ship stopped in the 80s.”

Now the retired pearl jeweller and Justice of the Peace can sit back and rest, the battle won.

“I am terribly proud that we now have the recognition we deserve, and (are) a recognised part of Anzac Day, and that younger and younger people are taking part in the Anzac Day service and becoming more aware.

“The Merchant Navy is now officially the fourth service. Now we can move on and write the real story, while we are still alive to tell it.”