Dr Joseph Williams – a man of mana and humility 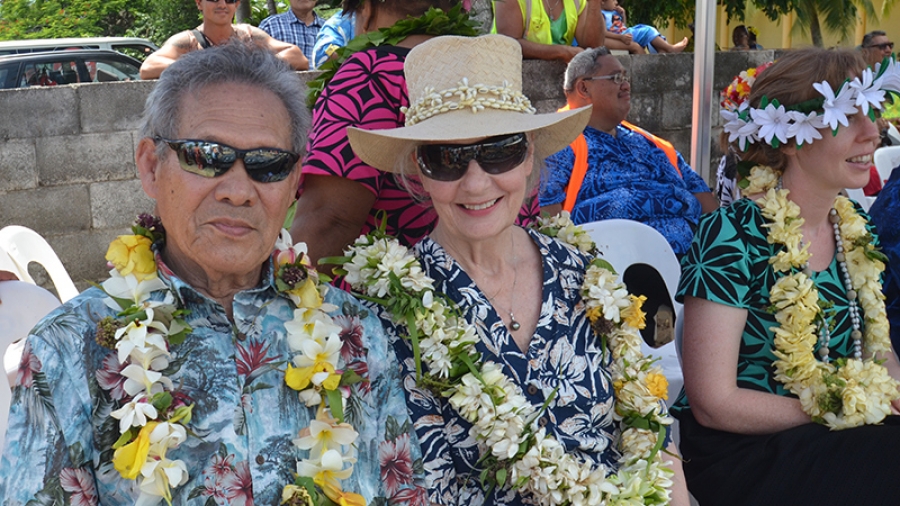 Before he was a renowned general practitioner and well-respected leader of the nation, the late and great Dr Joseph Williams was simply known to his anau and friends as Joe.

Cook Islanders here and around the world are in mourning and flags are flying at half-mast as a sign of respect for former prime minister Dr Joseph Williams who passed away in Auckland on September 4, after succumbing to coronavirus.

His older brother Tuaine passed away in Australia a day before.

Tributes have flowed for Dr Williams MBChB, MPH, QSM, QSO who tirelessly served his country, many patients and the Pasifika community in New Zealand for more than 60 years.

He was responsible for curing countless cases of skin condition eczema and admired for his dedication to not only Cook Islanders who he looked after, but others as well.

Betty Bailey refers to Dr Williams in the present tense while recalling fond memories of a life time of friendship.

She has known Dr Williams for the past 70 years and passes on her deepest sympathy to his wife Jill, his children and sister Manuae Scheel.

“We were all born in 1934 but Joe was born in November, so we called him the ‘baby’ of our group of friends - George Cowan, Dr Terepai Maoate and Tere Mataio who have already passed on and now sadly Dr Joe too,” says Bailey.

In 1950, Bailey travelled with Dr Williams, Cowan, Mataio and Emily Browne to New Zealand as part of a group of scholarship students.

She has fond memories of the trip. It took three to four days to reach New Zealand from Rarotonga.

“We all sat at the same table at the hotels in Samoa, Nadi and Suva before catching a seaplane to Mechanics Bay in Auckland,” she says.

“Meal times at various hotels en route were fun, especially seeing the outlay of cutlery on the tables.”

“The boys would ask me, what are all these knives and forks for?

“So, I would teach them what cutlery to use, and Joe would say to me, ‘I’m used to eating with my fingers’.”

And when it came to ordering meals, she says they would want to order two or three meals of the main course.

“I would discourage them and say only one main dish and then dessert.”

Years later when they met up, Bailey says Dr Williams said to her: “’you are our first teacher in table manners’”.

“We all kept up with our friendship, the others have already passed on and now our baby, before his 86th birthday. May you rest in peace Dr Joe.”

“Our nation has lost a much-loved son”.

A national memorial service will be organised for Dr Williams once his funeral arrangements have been confirmed, says Puna.

“As a sign of respect and remembrance I have asked that all our flags on government buildings be flown at half-mast.”

The prime minister says Dr Williams pioneered on many fronts and was a man way beyond his time.

He was one of our early breeds of home-grown medical officers of health, Puna adds.

As well as being in general practice and serving the people of this country for many years, he joined politics, and in 1968 he was elected as an MP for Aitutaki.

He served as Minister of Health and Education in the 1970s. In 1999 he became the country’s fifth prime minister and also held the Minister of Foreign Affairs portfolio.

“Born in Aitutaki in October 1934, Dr Williams has in recent years been based in Auckland and for thousands of our people in New Zealand, his medical practice was where they headed for their primary health care.

“Dr Williams was well regarded as a medical researcher and is credited for his world-leading research with the World Health Organization and practice to prevent the spread of the tropical disease lymphatic filariasis.

“Dr Williams will be greatly missed. E tumu rakau ruperupe teia no te Basileia kua inga. On behalf of the Government and people of the Cook Islands I extend our heart-felt condolences to Dr William’s wife Jill and family.”

Dr Kiki Maoate, a nephew and colleague of Dr Joseph Williams, officially announced the passing away of their respected and much-loved patron on behalf of the Pasifika Medical Association yesterday.

In the statement, Dr Maoate says Dr Williams has served his country, the Cook Islands, his community in New Zealand and his many patients for more than 60 years.

Dr Williams attended Northland College, graduated from Otago Medical School in 1960 and later completed a Master in Public Health at the University of Hawaii.

He returned to Cook Islands in 1964 and was the Medical Superintendent, Surgeon, Physician and Director of Health and Social Services.

Dr Williams was involved in the World Health Organization, serving as a member of the Executive Board from 1995 to 1997.

In 2016, he received the World Health Organization Award of Appreciation for his role in the elimination of lymphatic filariasis. He was recognised as a world leading researcher in eczema, prostate cancer and diabetes.

A prolific writer and publisher, Dr Williams most recently attended the WHO Western Pacific Region meeting in August 2019 as a member of the Cook Island delegation.

He held the overseas seat for the Cook Islands representing Cook Islands people living in New Zealand from 1994-2003 and remained active in politics.

Dr Maoate says: “Dr Williams held many senior roles in the health sector in New Zealand, served on many advisory committees and led the establishment of many organisations including the Cook Islands Health Network. He established Mt Wellington Integrated Family Health Care Clinic which served over 15,000 patients who travelled from all over New Zealand to see him and continued to practice medicine up until his recent short illness.”

In 1974, he received the Queen’s Service medal and was invested with the Companion Queens Service Order in 2011 for services to the Cook Islands community.

“Dr Williams was a statesman, leader, mentor, wise advisor to many, passionate advocate and strategist. He was generous, kind and led by example, living a life of service. We have been privileged to serve him as our patron and thank Mrs Jill Williams and family for sharing him with us and the community,” says Dr Maoate.

“His love, generosity and kindness has touched so many families, friends and colleagues. He has left us all with the gifts of his journey, and for that we are forever grateful.

“Rest well on your voyage to the heavens.

Dr Williams is a descendant of William Marsters and has heritage to the island of Palmerston. He attended the opening of Marsters House last year.

The Marsters family have expressed their sympathy to the families and remaining sibling, sister Manuae.

A family service will be held on Monday September 7 at 6pm at Marsters House in Avarua for Tuaine and Dr Williams.

For further information, contact the Queen’s Representative Sir Tom Marsters on 54030 or Manuae Williams on 56899.

The Cook Islands Catholic Pure Tusia in New Zealand will livestream a service.

“The service is dedicated to Uncle Joe, our former Cook Islands prime minister, medical practitioner and metua tane o te Kuki Airani, from the Polynesian Centre, Sunday September 6 (NZ time) from 10am. Our deepest condolences to Aunty Jill and family and the team at Mount Wellington Integrated Health Centre.”