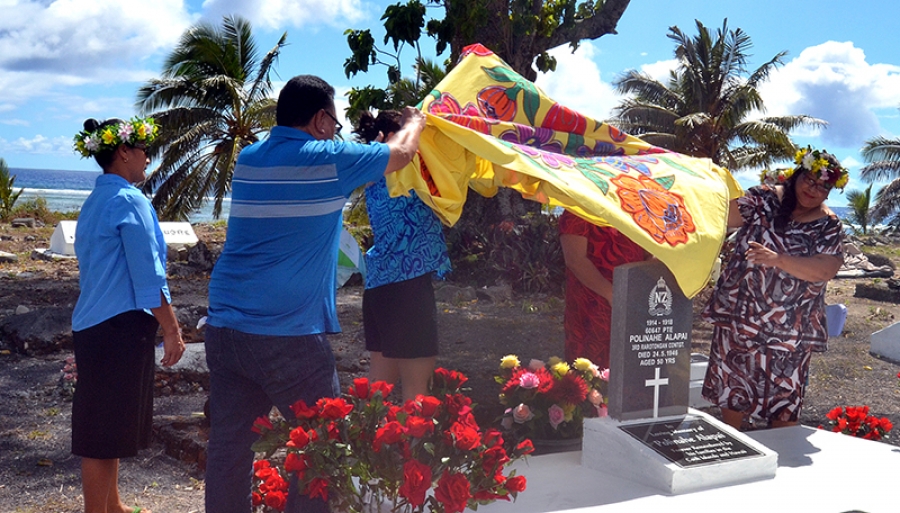 The unveiling of the grave of World War One veteran, husband and father Polinahe Alapai, took place on Tuesday.

The grave had been lost to his family, like many graves in the Nikao cemetery as a result of years of erosion caused by storms and wave action.

After members of the Nikao cemetery restoration team discovered a piece of a headstone with the words “aged 50” written on it, Alapai’s granddaughter, Dr Neti Herman, asked the New Zealand Ministry of Defence if they could help find out whose grave it was from. With only the broken piece of headstone to go by, they were able to use old records and verify that the grave was in fact his.

Alapai’s headstone was unveiled before four generations of family members from his first wife, Manihikian-born Noouapu, and his second wife Ngamata. Family members who attended came from Hawaii, Australia, New Zealand and Rarotonga.

Herman said Alapai served in the war, described at the time as “the war to end all wars”, as part of the third Rarotongan contingent for four years from 1914. He died in 1946 at the age of 50.

Opening the ceremony, a descendant of Alapai, Reverend Tuaine Ngametua, said finding the grave site was special because it was somewhere for his children and their children to come back to and remember their grandfather, and great-grandfather.

After Rev Ngametua prayed, family members sang and played a family hymn on a ukulele.

“In our journey of life we set our direction from where we come from,” said great-grandson Temu Okotai.

“So this is a milestone in our life. Our children can see where they come from.”

“He brought me up,” says Here Paraima Arapai. “He was married to my aunty. He was the gentlest person I’ve ever known and he spoilt me rotten. I remember he went to work as a foreman of the copra (industry) on Manuae. He went to war when he was just 23.”

In 1934, “The Friend Magazine” gave an account of Polinahe Alapai’s father and two Hawaiian friends who shipped as sailors on a South Seas trading schooner, “to see something of the great world, outside of their beloved Hawaii.

“The names of these boys were William Kakela Kanoa, Henry Alapai and Ben Api.”

The story goes on to say, that after stopping at Tahiti they came to the Cook Islands. “Henry Alapai married a native girl of the island of Mangaia; he had two sons.” One of those sons was Polinahe Alapai.