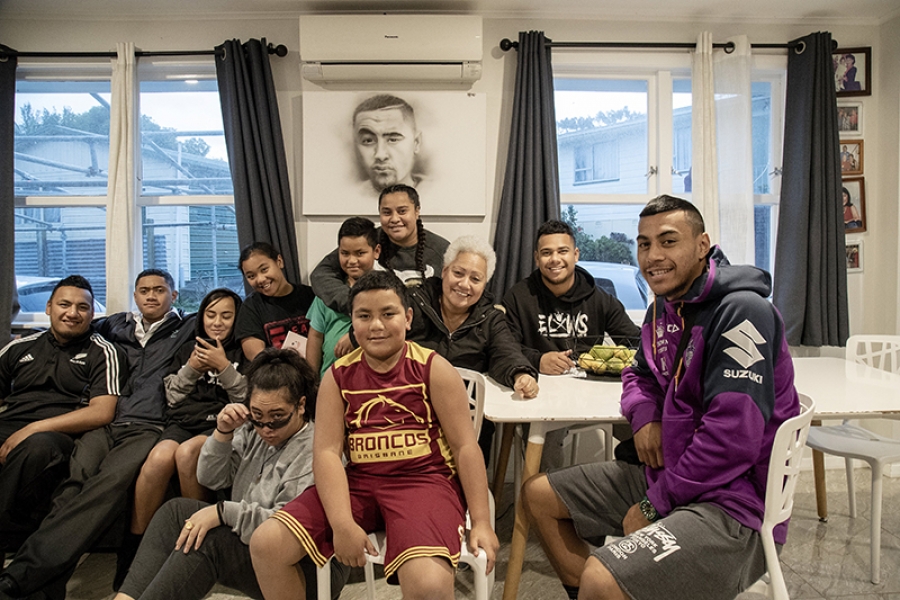 Cooks kids are falling behind in school, taking time out to attend week-long wakes for distant relatives across the Pacific.

Three primary school-aged children pore over workbooks at Pikura Purotu's south Auckland dining table on Tuesday evening while half a dozen teens toil over a half-built shelf on the floor.

"Chop chop! Get out of here," the mum of 15 and nana to 50 commands, making space for guests. "But that doesn't mean stop doing your homework. Don't think I won't test you later!"

Purotu hails from Pukapuka, one of the tinier Cook Islands, and is something of a benign Pasifika tiger mother. Her five bedroom home currently houses about 15 people: a multi-generational cast of her own brood, their cousins and their mates.

"It's pretty typical for our community," the 58-year-old matriarch says.

They do it for the support network, due to a lack of housing in Auckland, and because they are poor.

Purotu deliberately balances her island values – family, community, church – with Kiwi realities. She's a hard taskmaster when it comes to getting to school on time and doing homework "because everything is about getting that piece of paper".

But the balancing act is not easy and Purotu knows of Islander families who slip and give up. Well-intentioned parents pluck kids from school to attend funerals, for instance, which in Pasifika communities can last more than a week. While funerals are a chance to reconnect with tradition and far flung aunties, their length and frequency can sabotage a child's education, Purotu says.

She and her priest, the Reverend Fakaofo Kaio of the Onehunga Cooperating Parish, campaign for kids to spend a maximum of three days at a funeral – and only if the deceased is a member of their immediate family.

"I tell parents that as much as I love to see their kids at church, they lose confidence when they're away from the classroom too long," says Kaio.

"You can imagine going to school and you don't know half of what's going on. You're just sitting there looking foolish. You wonder what's the point in even being there."

He can do 20 funerals a year and the same crowd go to many.

Out of the 88,000 Pasifika students enrolled in schools around New Zealand in 2018, only 52 per cent attended school "regularly" – defined as more than 90 per cent of the time that they were expected to, according to data from the Ministry of Education. The national average was 64 per cent.

The number of Pasifika students enrolled in New Zealand schools has more than doubled since 2011, when 61 per cent of them attended school regularly.

Looking at eight years of the ministry's truancy data, Gaugatao is unimpressed. "How have they let it get worse? I'm thinking we haven't really learned anything in that time," he says.

Booze is banned from Purotu's house – which is lined with photos of her beloveds getting married, as babies, and wearing traditional Cook Islander attire – because she knows too well how it damages families.

She used to bring local kids home for a feed if she knew their own parents were in a pokies den or on the booze. Fifteen people currently live in the five bedroom bungalow she and her then-husband bought in 1979.

In summer, the younger ones drag mattresses onto the deck. In winter they crash on couches. Most are Puroto's children and grandkids, but all have cousins and mates who know they're welcome any time.

Numbers rose sharply when one of Purotu's daughters – who has ten kids of her own – moved back home. Her landlord upped the rent, she couldn't afford it on her salary, so she now shares a king-sized bed with her three youngest children. The rest live with their dad.

Purotu recently replaced her carpet with tiles "because of all the traffic".

By force of personality, Purotu is the effective ringmaster of what could easily be a circus. She preps school lunches at the crack of dawn, then leads everyone in devotional at 7am. Breakfast is porridge and "lots and lots of toast" – at its peak, the household would get through ten loaves a day – then it's off to school and work.

It's a hectic household, but clean and cheerful. Proof that communal living is not synonymous with slipping through societal gaps. When the teens were kicked out of the living room, some regrouped on the deck for an impromptu ukulele session. Others started dealing cards. Laughter was loud.

Purotu says she's always worked hard to keep everything in motion. She's been a butcher, shoemaker, and social worker, among other things. The family grows its own vegetables and invested in huge cooking pots early on. These days she's a volunteer social worker and driving instructor, for assorted charities. Her older kids, in the workforce, support her financially.

Purotu has no time for whinging. She's quick to recall her five-year-old self back on Pukapuka, heading off into the bush at 5am each morning to look for firewood.

"You'd bring it back on your shoulders or head, before you even started getting ready for school. Then you'd be lucky if you got lunch. And that lunch was always a coconut," she laughs.

She's also quick to recall why her parents left Pukapuka: to get their children an education.