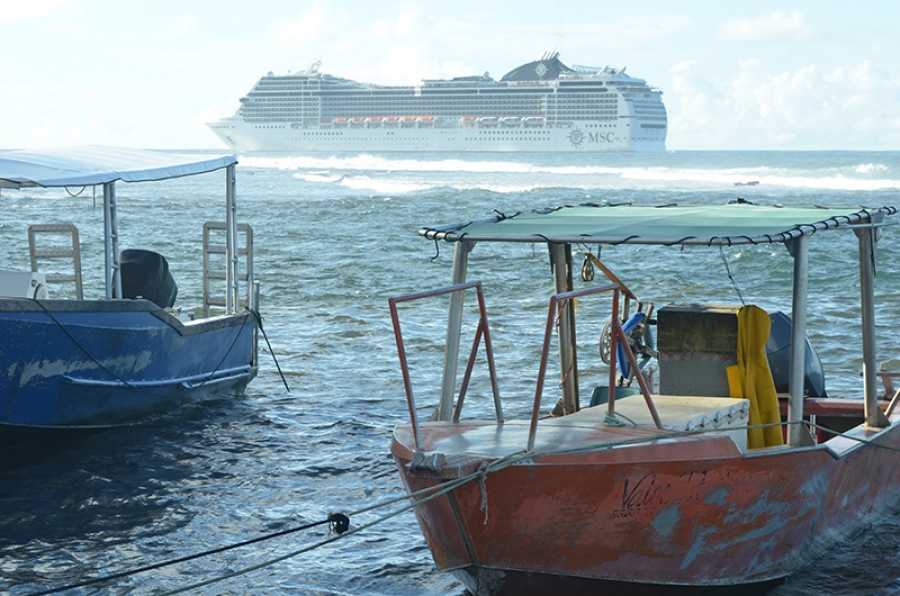 The MSC Magnifica prepares to raise anchor and leave Rarotonga last night, after a torrid visit to Cook Islands in which four passengers were taken to hospital and it was banned from Aitutaki. 20030222

Cook Islands will not compromise the well-being of its people for economic gains, says the Prime Minister.

It comes as Cook Islands Tourism revealed the cancellation of cruise ship MSC Magnifica’s visit to Aitutaki yesterday would cost the island at least $210,000 in direct tourist spending.

The full impact of the travel and cruise ship bans is unknown, but Puna said he was confident in government’s ability to weather the looming storm.

He commended the work of the National Health Emergency Taskforce, but said with the rapid spread of this disease across the world, a nationwide response was now required.

“The welfare of our people is going to be the absolute priority but in saying that we are not going to panic – that’s the worst thing we can do,” he said.

“Like every other country that’s facing this challenge, we don’t know what the future will bring … We have been preparing for emergencies like this.”

Government has cancelled all 11 cruise ships to the outer islands in the next two months, due to the “fragile health system” in the pa enua.

Cook Islands Tourism said the cancellation of MSC Magnifica’s visit to Aitutaki yesterday would have cost the island’s economy at least $210,000 in direct tourist spending.

And that’s just the first hit to the outer island economies: the smaller Le Soleal, Silver Explorer, Island Sky and Paul Gauguin had all been scheduled to visit the pa enua in the next two months.

In all, 11 cruise ship calls are being cancelled: seven to Aitutaki, three to Palmerston and one to Atiu.

“Cook Islands Tourism understands the need to implement these new temporary restrictions regarding cruise ship visits to the pa enua and will support the government and industry to minimise the impact of this,” said Metua Vaiimene, director of destination development at the agency.

“Cook Islands Tourism looks forward to a time when these restrictions are lifted, and our pa enua communities can, again, safely engage in the cruise tourism industry.”

Government last week also announced that anyone travelling from Hong Kong, Taiwan, Macau, Japan, Singapore, South Korea, Malaysia, Thailand, Indonesia, Philippines, Vietnam, Cambodia, Laos, Italy and Iran in the last 14 days will be denied entry into the country. Travellers from China, the origin of the outbreak, are already banned.

Questions were raised about why the country did not ban travellers from Australia and New Zealand where more and recent coronavirus cases have been recorded.

Health Secretary Dr Josephine Aumea Herman said they considered the capability of the health systems in the countries affected by the pandemic before deciding on the travel restrictions.

They also considered the close geographical, travel and trade these countries have with China.

The Prime Minister Henry Puna added: “There is no racist overtones as alleged by some people on social media. It’s everything to do with what is best for this little paradise.

“The world doesn’t have anything to counter it with – that’s what makes it so serious.

“The World Health Organization says the risk of global spread of the coronavirus is ‘very high’, therefore we need to prepare ourselves.

“The success of our response is going to require the cooperation of everyone. I urge the public to work together with and to take advice of our health officials.”

Meanwhile, of the three MSC Magnifica passengers admitted to Rarotonga hospital, Dr Herman said one had been returned to the ship for its departure.

The other two were awaiting medical evacuation to their home countries. She declined to disclose what countries they were from, to respect their privacy.

One was a 75-year-old who suffered a cardiac event, another was a 77-year-old with bacterial pneumonia, and the third admission was a 60-year-old with a skin rash.

Dr Herman said none of the three had suspected coronavirus disease 2019.
"Pneumonia can be caused by bacteria, viruses, fungi or chemicals through aspiration," she added.