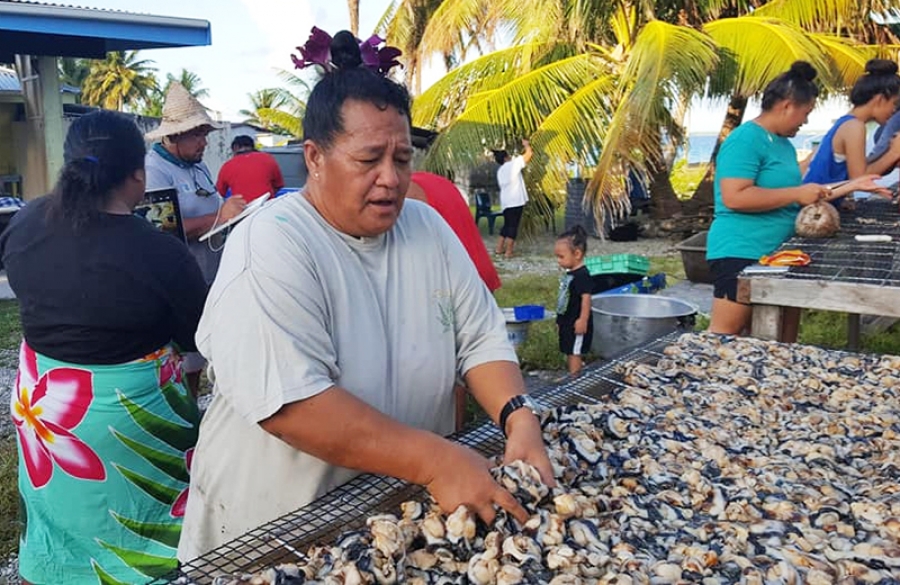 Manihiki residents carried out a mass harvest of paua recently as a part of the island's Te Maeva Nui preparations. PHOTO: Ministry of Culture Cook Islands. 18042304.

The Ministry of Marine Resources (MMR) says the people of Manihiki should be proud they have used their initiative to protect and conserve their stocks of paua in the Manihiki lagoon.

The comments come following local freelance journalist Florence Syme-Buchanan’s condemnation of the mass harvesting of paua from the Manihiki lagoon, writing on social media that the practice is “stupid beyond belief”.

Paua are mass-harvested in Manihiki once a year and are a highly sought-after traditional food source. This year’s harvest was a part of the island’s Te Maeva Nui preparations.

MMR says before any “large paua harvest”, they and the Cook Islands Police Service assist the Manihiki island Council with the setting of a quota. In the past, MMR says they have conducted paua assessments and provided a recommended harvest quota to the Island Council, relating to quantity and size limits.

“MMR provides a report to the island government, which then allocates a limit per family or per person during the harvest,” says Inshore Fisheries &amp; Aquaculture Division Director Koroa Raumea.

A police officer at Manihiki airport also conducts regular checks to ensure no paua leaves the island. Checks have been ongoing for “a couple of years” now.

However, Syme-Buchanan says harvesting paua in such a manner is not sustainable.

She says paua are a finite resource and that if the people of Manihiki continue to harvest paua in the same way, then they can expect “the same result as Aitutaki – no more paua”.

MMR says fisheries officers in Manihiki collect data on the paua harvested and this information is then relayed to its headquarters in Rarotonga. Once the harvest arrives in, the ministry compares the data to the harvest. If excess amounts of paua are found, MMR says it can be deemed to be illegally harvested. It is then confiscated.

“The number of days for harvesting are also limited…if the quota is reached before this time, harvesting is usually halted,” says Raumea.

He says the process of developing a harvest strategy and a recommended quota based on scientific surveys ensures that food security and sustainability are “key considerations” for the community. The concept is similar to the Aitutaki trochus fishery, where MMR sets a harvest quota.

“It is regionally a well-recognised initiative that enables rural communities to prioritise sustainability of marine resources” says Raumea.