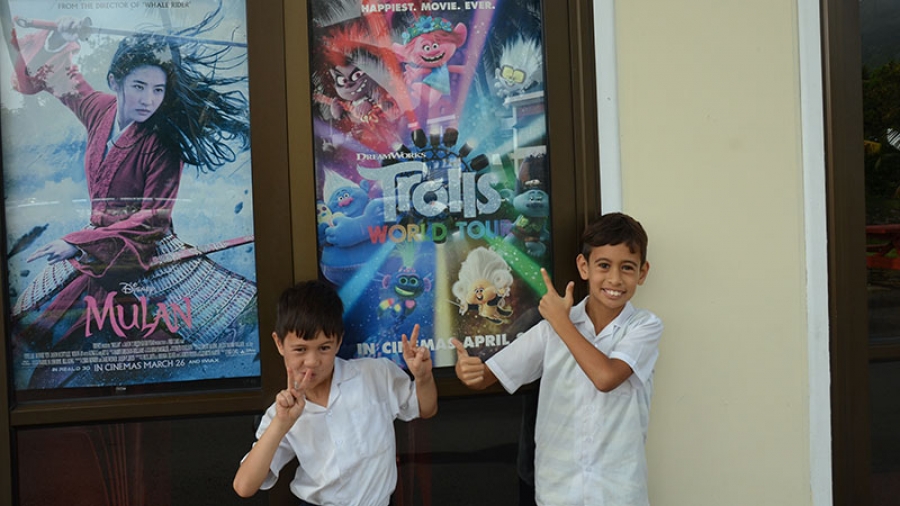 Logan Etches left and his older brother Manarii are looking forward to the Empire Cinema reopening on July 9. MELINA ETCHES 20062407

Empire Cinema will be opening its doors to patrons from July 9, after shutting down in March because of the Covid-19 pandemic.

Cinema owner Pa Napa said they wouldn’t show any new releases in the opening week, but were in talks with distributors to get their hands on new releases that have been put on a hold due to the pandemic.

For now, the cinema will do reruns of movies that they were showing before the shutdown. They include Vin Diesel’s Bloodshot and the animated movie Onward, which will be screening in the opening week.

Napa said they had made a post on their Facebook page to gauge the interest of people and see whether they preferred reruns of some movies. The response was encouraging.

The announcement from Empire Cinema is music to the ears of Takitumu Primary School students Manarii, 10, and Logan Etches, 8.

“I can’t wait, it’s like a fun night out for kids where we get to see our friends, our families and have lots of popcorn and ice cream,” said Logan.

“We will be good and do all our chores fast, so we can go to the movies early, I can’t wait,” added Manarii.

They both are looking forward to Trolls World Tour (Trolls II) which was supposed to be released in April.

Lucky for them, the cinema managed to get its hands on Trolls II before the shutdown.

“We managed to get Trolls II and A Quiet Place Part II before everything was shut down on March 21,” Napa said. “But we have to request the distributors to allow us to release these movies.”

“The problem with movies like Troll II, which was initially supposed to be released on April 10, is most of the people have already seen them,” Napa said.

“My granddaughter got it from her friend at school. Once anything is released in the cinema, a week later most of the people have them in their hard drives.”

The first major releases at the Empire Cinema post Covid-19 shut down will be Mulan on July 23 and Tenant on July 30.

Napa said he would be working with their New Zealand distributors to see which major movies they could access in August.