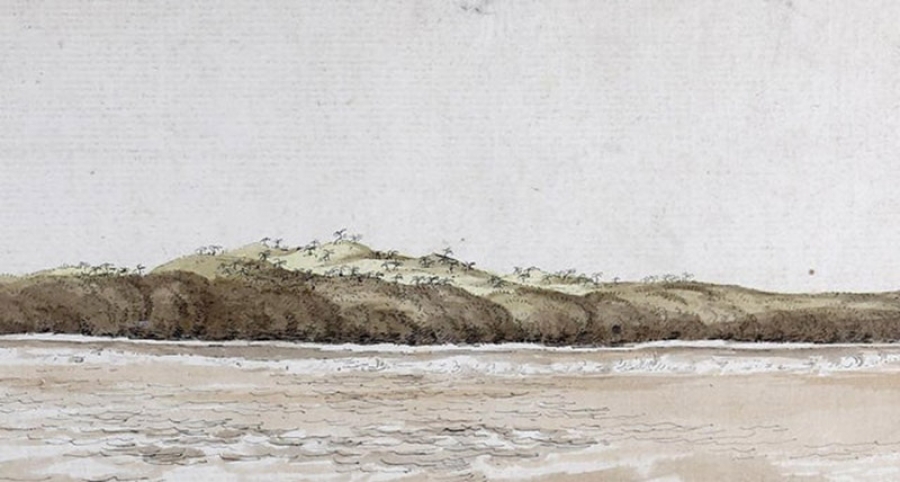 Titled Magianooa, locals yesterday said the watercolour appeared to be look towards Oneroa with the Keia hills behind. 20022501

The first ever colour image of Mangaia has been discovered buried in a box in Britain. Local leaders would like to see it returned home to Cook Islands.

A watercolour depicting a scene from Captain Cook’s third voyage to the Pacific, by the ship’s surgeon’s mate and amateur artist, William Wade Ellis is to go under the hammer.

The work was taken into Chiswick Auctions, London, in a box of other drawings by its owner, who had no knowledge of what this particular work was.

It was only on further investigation and research by specialist Rhydian Williams that it was determined as being from Cook’s third and final voyage, the Scarborough News reports.

The work in ink and wash is a simple, yet beautiful encapsulation of Mangaia, Cook Islands, as HMS Discovery approached. Now, Mangaia leaders hope the painting can be brought back home.

Titled Magianooa, it is believed to be after field drawings Ellis (1751-1785) produced in 1777 (currently in the National Library of New Zealand).

The work is backed onto a map and is inscribed on its reverse as: ‘View of Discovery Island, latitude 16.8 in the S. Seas taken at sunrise.’

Williams told the Scarborough News: “We were delighted to be presented with this lovely watercolour and to discover its amazing background, as its owner had no idea of its origins.”

Anthony Whyte, the executive officer of Mangaia, said the general consensus of the island council was that the Ministry of Culture should purchase the watercolour on behalf of the Cook Islands people.

“It’s certainly of historical and cultural importance for identifying a snapshot in time of Mangaia some 245 years ago,” he said.

“We think it was painted from the perspective of looking at Oneroa with the Keia part of the hills in the background, and noted was the absence of trees on the coastline at that time.”

They travelled from Plymouth via Cape Town and Tenerife, to New Zealand and the Hawai’ian Islands and along the North American coast to the Bering Strait.

It was on this voyage, in Hawai’i, where quarrels with the locals broke out culminating in Cook’s death in 1779.

Ellis was a skilled artist, who captured the changing landscapes and wildlife during the voyage.

Collections of his works are held in the Natural History Museum, London and the Alexander Turnbull Library in Wellington, New Zealand.

John Robson, of the Captain Cook Society, says Ellis was a competent artist who drew many birds and fishes during the voyage.

Unfortunately, they have remained amongst the least-known of material from Cook’s voyages. Some critics have dismissed him as merely competent, saying that it was only after he transferred to HMS Resolution was he able to learn from John Webber, the expedition’s principal artist.

“While Ellis’s landscapes are rather ordinary, his zoological drawings are quite good, and much better than those of Webber,” says Robson.

David Samwell, the surgeon on Discovery, described Ellis as “a genteel young fellow and of good education”.

Ellis was supposedly educated at Cambridge University and St. Bartholomew’s Hospital, London, but no evidence for these claims has been located. The quality of his bird paintings, however, shows evidence of some scientific education or training.

Having survived the third voyage with Cook, Ellis found himself in financial difficulties, and succumbed to an offer of 50 guineas to write an account of the third voyage. Ellis’ work, published in 1782, sold well, even going into a second edition and being translated.

However, he gained nothing further financially from the book’s sales, on account of the terms of the publishing agreement. His reputation was ruined, because he had upset the authorities by publishing his narrative without permission, ahead of the official account. As a result, his prospects for employment were few.

An accident on ship in 1785 claimed his life, just as he was embarking on an Austrian expedition. He fell from a mast at Ostend, in Belgium.

“We are sorry to inform our readers of the death of Mr Ellis, formerly of this place, occasioned by a fall from the main mast of a ship at Ostend,” The Times reported.

“He was on his way to Germany, where the Emperor had engaged him on advantageous terms to go on a voyage of discovery. Mr Ellis accompanied Capt. Cooke in his last voyage, and soon after his return published an account of it, in two octavo volumes. His premature death is lamented by all who knew him."