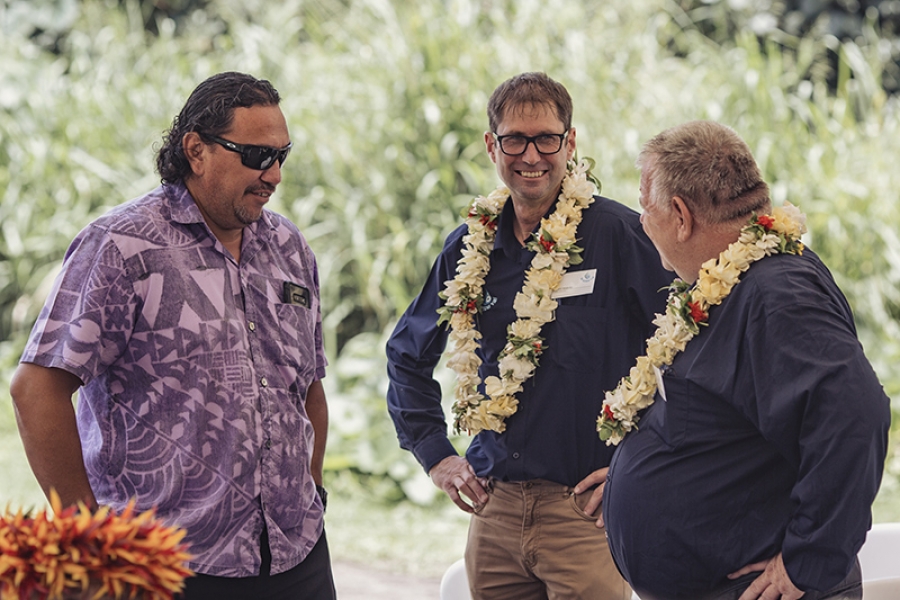 Lonely away from his family, and bruised by the opposition to his work, the departing To Tatou Vai boss is looking forward to a break.

Departing water boss Brent Manning has only one piece of advice for his successor: Bring your family over because it can be a lonely job.

“Make sure to get your wife and your family out here,” says the founding head of To Tatou Vai. “Make sure you have a support around you as a person and individual in what can sometimes be a lonely job given some of the opposition.”

Manning, who was appointed the To Tatou Vai head in 2018, weathered plenty storms in his 15 months tenure.

Water disinfection was the major one, after Manning pushed ahead chlorine with the government’s preferred solution of chlorine.

“It’s really important to look after yourself first and everything else flows from there. If you are not in a good shape in yourself you might not know if you are able to do this.”

His successor Greg Longman was named last week. The Queensland-based engineer, who also holds an MBA degree, has taken Manning’s advice. “My wife is hoping to come in the imminent future,” he says.

Longman took up the role after spending about six years working in the waste water sanitation and water disinfection areas in Kiribati and Vanuatu.

Prior to that he spent a considerable time working in Papua New Guinea on similar projects.

A friend of his suggested he should apply for To Tatou Vai position and after looking through the role description, Longman knew Rarotonga would be his next stop for at least two years.

“It combines a lot of skills that I have from water for example as an engineer and I got an MBA so I was able to use general management and experience from there.”

When he arrived here about three weeks ago, he was surprised with the progress To Tatou Vai had made under Manning’s leadership.

Longman says he was aware of the Te Mato Vai infrastructure and the progress but wasn’t sure about the structure of the water authority.

“I’m very delighted with the amount of work that has been done to get this organisation at this stage by Brent, the board and other parties in such a short time.

“I was pleasantly happy that they managed to get a lot done including a very strong vision and mission which aligns with other visions and missions from parent body like Cook Islands Investment Corporation.”

One of Longman’s roles will be dealing with the landowners on various projects. He has some experience in this area from his previous jobs.

Communication is key, he says.

“Talking to the owners of these land areas and really give them an opportunity to digest and understand this is why we need their land and this is what we proposing, that communication and approach helps a lot and being very respectful to the landowners and hierarchy of culture helps a lot too.”

Manning agrees, and adds it’s all about respect.

“We have created a relationship now through meetings and addressing some of the issues that landowners have made and there are some of the unresolved matters for time being and there will be more to come.

“I only had a year or so to build that relationship and I now have got a rapport who those people,” he adds.

“I’m sure Greg would develop the same sort of relationship because it’s important, for us as To Tatou Vai, maintain those relationships.”

Under his leadership, Longman is hoping to achieve an efficient and functioning To Tatou Vai – one that people can trust.

He says there are more projects coming up following the commissioning of Te Mato Vai.

“The aim is to make sure we have a safe water system for the wellbeing of the people of Cook Islands.”

Brent Manning says he will keep a close watch on To Tatou Vai which he started from scratch a little over a year ago.

“My expectation would be everyone will be drinking water from a system which is working well, consistently safe to drink, its reliable, good quality decent pressure and not having regular interruptions and loss of pressure like they experience now and won’t be getting mud from taps.”

Manning, who leaves the country next week, will go on a biking expedition in New Zealand to raise funds for Puaikura Volunteer Fire Brigade, followed by a trip to UK and Spain with his son.

He is open for a return in some capacity, if needed. But for now, he is off-duty.