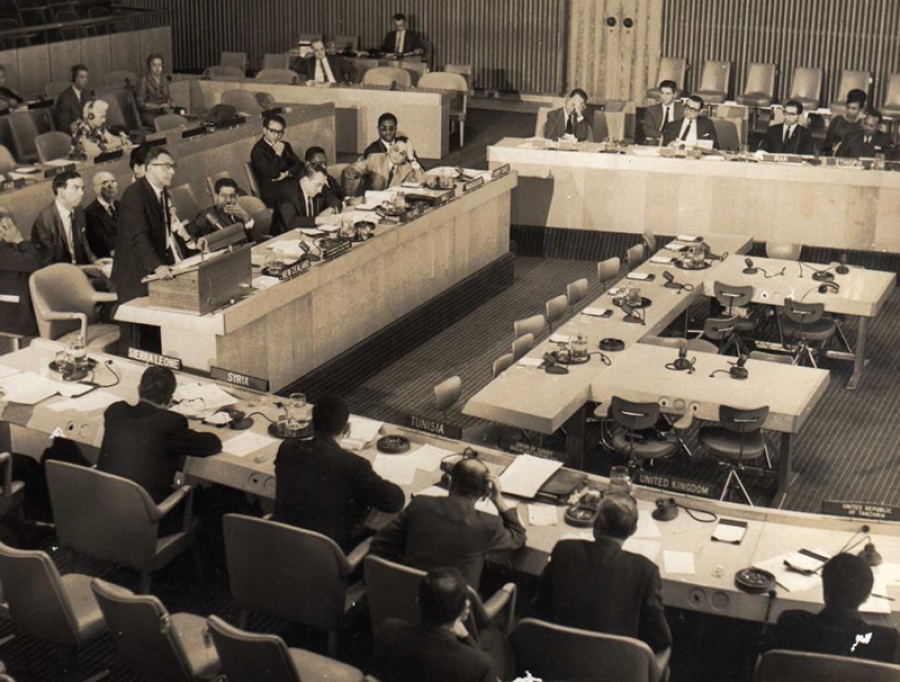 Howard Henry, in this two-part series on the Cook Islands’ prospects of becoming a member of the United Nations, was one of two original foundation staff members of the External Affairs Division (later to be the Ministry of Foreign Affairs) of the Cook Islands government in 1973.

He was awarded a Study Fellowship by the Government of Australia in 1975 and spent three months in Canberra studying for his Certificate in “Diplomatic Practice and International Relations” under the auspices of the Australian Ministry of Foreign Affairs.

Henry was awarded a UNDP scholarship to Oxford University in England 1977-78 where he obtained his Certificate in Diplomacy following his studies at Queen Elizabeth House. He passed exams in International Politics, International Law and International Trade and Finance (with distinction).

He resigned from the Cook Islands Public Service following major restructuring of the External Affairs Division in 1979.

Amidst continuing debate over the wisdom of the Cook Islands making a bid to join the United Nations, Henry says if the country wants to join the global organisation, there would have to be a major amendment to the Cook Islands Constitution Act 1965. As part of that amendment process, there would also have to be a national referendum gaining the support of at least two-thirds of all valid votes cast.

But will the New Zealand Government continue to allow Cook Islanders to retain their New Zealand citizenship status if the Cook Islands joins the UN?

“Good question, but one can only ask,” says Henry.

In terms of international law, the Cook Islands does not have full and independent responsibility to conduct its own foreign affairs relations. The New Zealand government, in one way or another, has an apparent influence in the way the Cook Islands government conducts its foreign affairs and international diplomatic activities because Section 5 says that is part of the New Zealand government’s “responsibility”.

For many years now, this has not necessarily been the case.

The Cook Islands has been very active on the international stage in terms of foreign affairs activities in its own right and without needing to go through the consultation process between the two governments as stated in Sections 5 and 6 of the Cook Islands Constitution Act 1965.

“Nothing in this Act or in the Constitution shall affect the responsibilities of Her Majesty the Queen in right of New Zealand for the external affairs and defence of the Cook Islands, those responsibilities to be discharged after consultation by the Prime Minister of New Zealand with the Premier (later amended to Prime Minister) of the Cook Islands.”

“Nothing in this Act or in the Constitution shall affect the status of any person as a British subject or New Zealand citizen by virtue of the British Nationality and New Zealand Citizenship Act 1948.

(Note : The NZ Citizenship Act 1977 replaced the above Act with no change to Cook Islanders’ status).”

In terms of possible United Nations membership, the significant words in Section 5 are “external affairs” and the reference to this responsibility being discharged “after consultation” between the government leaders of New Zealand and the Cook Islands.

However, the law is the law, and Section 5 clearly states the Cook Islands can only participate in foreign affairs matters after first consulting with the Prime Minister of New Zealand.

The question of New Zealand citizenship (Section 6) in my opinion . . . is a different issue.

The Montevideo Convention is a treaty that was signed at Montevideo, Uruguay on 26 December 1933.

It came into force on 26 December 1934 with 19 signatories from North, Central and South America. The instigator of this Convention was the then President of the United States Franklin D. Roosevelt.

Article 1, of the Montevideo Convention 1934, lists the four criteria for statehood that have been recognised by international organisations as an accurate statement of “customary international law”.

So when it comes to statehood, countries should possess the following qualifications :

4. the capacity to enter into foreign affairs relations with other states.

Question: Does the Cook Islands satisfy all the above four qualifications to be recognised in regard to statehood as accepted by “customary international law”?

Answer: No. This is because the words “external affairs” are included as part of Section 5 of the Cook Islands Construction Act 1965 to indicate that the Cook Islands does not have the capacity, in its own right, to enter into foreign affairs relations with other countries or international organisations without first consulting the Government of New Zealand.

The United Nations Organisation was established following a major conference at San Francisco at the end of 1945. As a side note, 3 of the original signatories did not have their own citizenship at the time of joining. Canada, Australia and New Zealand citizens were all British subjects only.

The criteria for United Nations membership are outlined in Article 4 of the UN Charter and can be divided into four key elements:

1. Any country applying for UN membership must meet the requirements of statehood as defined under “customary international law” as having a defined territory, a permanent population, a government of some kind and the capacity to conduct foreign relations with other countries.

2. (Note: these are the same basic qualifications as included in the Montevideo Convention 1934).

3. That country must be a “peace-loving” country . . . and with a track record to prove it.

4. Any country applying for membership must declare that it accepts all the obligations contained in the UN Charter by consenting to be bound by the UN Charter, a legally binding international treaty, and attaching a formal declaration as such to its UN membership application.

5. The country concerned must be willing and able to carry out all the UN Charter obligations.

6. (Note: There is no mention in any part of the United Nations Charter that a country has to have

7. H is own citizenship status in order to qualify to become a full member of the United Nations.)

Question: Does the Cook Islands satisfy all the above four key elements to be recognised in regard to statehood by the United Nations, as proscribed for under Article 4 of the UN Charter?

Answer: No. This is because the words “external affairs” are included as part of Section 5 of the Cook Islands Construction Act 1965 to indicate that the Cook Islands does not have the capacity, in its own right, to enter into foreign affairs relations with other countries or international organisations without first consulting the Government of New Zealand.

The Cook Islands qualifies for United Nations membership in all four key elements above except for 1 (d).

The admission of any country to membership in the United Nations is decided by a two-thirds majority of the UN General Assembly following a recommendation from the UN Security Council. The procedure to apply for membership is as follows:

1. The country concerned will submit a “letter of application” to the UN Secretary-General requesting membership along with a statement confirming that country’s acceptance to all the obligations of the United Nations Charter.

2. This application is then passed across to the Security Council for its consideration.

3. To be successful, this application must receive the support of at least nine of the 15 members of the Security Council.

4. Once that has happened, the Security Council will then send a recommendation across to the UN General Assembly for its consideration. A two-thirds majority is needed for that country to then be admitted as a member of the United Nations.

5. Membership becomes effective the date the formal UN resolution for admission is adopted.

However, the Security Council has five permanent members. They are: China, France, the Russian Federation, UK and the USA. Each of these five countries has a “veto option”.

If one of these five permanent members of the Security Council use their veto and say “no”, then the membership application is declined.

Question: What chance does the Cook Islands have of getting a nine vote-plus support for UN membership from the Security Council without any of the five permanent members exercising their power to veto and therefore block its membership application?

Answer: In my opinion, no chance at all.

This is because at least one or more of the five permanent members will veto our application because of the words “external affairs”, as included in Section 5 of the Cook Islands Construction Act 1965, indicates that the Cook Islands does not have “the capacity to conduct ‘independent’ foreign relations with other countries or international organisations”.

5. The Cook Islands Constitution Act 1965 must be amended

To become a member of the UN, the Cook Islands needs to take “full responsibility” for its foreign affairs.

In order to do this the Cook Islands Constitution Act 1965 must be amended by deleting the words “external affairs and” from Section 5.

How this change can be made is clearly spelt out in Part 111, Clause 41 of the Cook Islands Constitution Act 1965:

1. There must be a public referendum in which all persons entitled to vote in a general election can take part. To be successful this referendum must receive the support of at least two-thirds of all valid votes cast.

2. The bill reflecting the constitutional amendment to Section 5 then goes to parliament and must receive the support of at least two-thirds of its members.

3. Subsequent to that, Section 5 will then be amended with the words “external affairs and” being deleted.

4. The path will then be open for the Cook Islands Government to send a letter to the Secretary

5. General of the United Nations indicating its membership application. And in my opinion, this application will ultimately be successful.

I do not believe this will be the case.

I do not accept that the government of New Zealand would be so “harsh” or “punishing” towards the people of the Cook Islands simply because our government wants this country to become a full member of the UN.

When all this is explained to the New Zealand government, and they understand what the Cook Islands is hoping to achieve, in my opinion they will endorse what is being proposed and so give the Cook Islands their full support for our constitutional amendment to delete the words, “external affairs and” from our Constitution with no change to our New Zealand citizenship status.