Tuhe’s super-healthy recipe for happiness and a long life 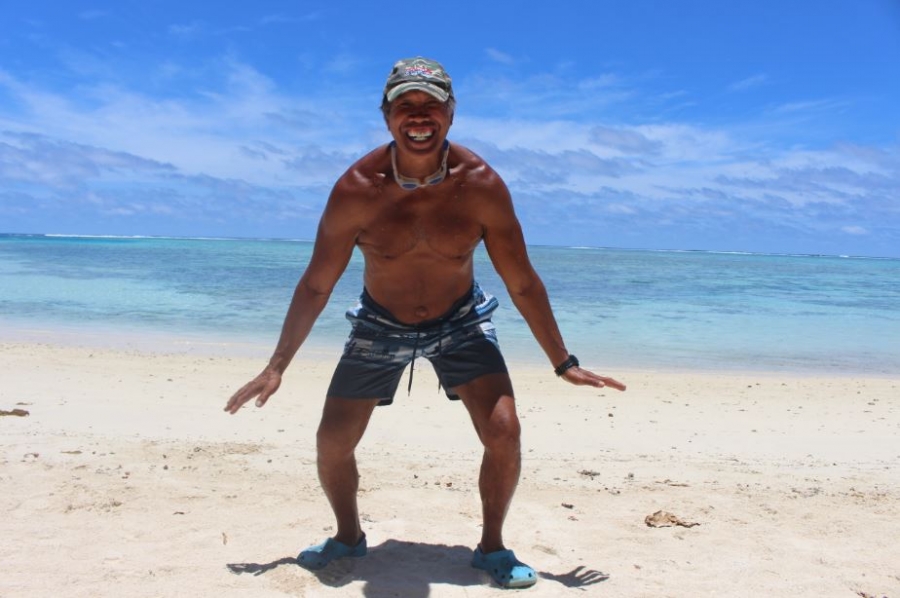 Tuhe Piho’s “super healthy” drinks are a recipe for happiness and longevity.

He says their coconut water base will make you look younger and even more beautiful or handsome than you already are.

After you drink his “Cheeky Monkey” banana smoothie, Piho also promises everything you say will make others happy. And, he adds, if you smooch a special someone before finishing his “Angel Kiss” with passionfruit, something amazing will happen to you while in Rarotonga. So, not your average beverages.

His “Happy Turtle” blend also has cancer-fighting soursop chopped in for good measure, so you can expect to live longer, he claims, especially if you see one of the elusive marine creatures while in the Cook Islands.

Fortunately, Piho also runs sensational snorkelling encounters to ensure that you have a high chance of doing just that.

The drinks are well worth the price tag just to hear him rattle off the beautiful description of his smoothie ingredients at his Super Healthy Food hut at Punanga Nui and Muri night markets.

He’s also a living testimony to drinking his own juices daily, looking decades younger than he really is.

And, his liquid creations are just the beginning of his lifelong mission to bring happiness to everyone he meets.

Whether he’s dishing up sumptuous plates of goodness at the markets, taking visitors on cross-island treks, or on his amazing underwater turtle tours, all his guests leave with massive smiles on their faces.

Piho’s quest to make others around him happy started from a young age, when he left Rakahanga with his family bound for Dunedin, New Zealand, in 1966.

He quickly made friends he says, “proving his courage” by burning a match under his bare foot, much to the amusement of those watching.

Piho was venturing out into the world following in the brave footsteps of his trailblazing aunt.

“In 1963, my aunty Pepe Piho a nurse in Rakahanga, followed a visiting doctor back to Otago.

“She was the first Cook Islander in Dunedin and was the initial contact that encouraged my father Charlie to move there a year later and many more to follow.

“Now there are about 3,000 Cook Islanders living there today.”

Piho says his parents had the foresight to provide educational opportunities for their sons, and after graduating with a degree from Otago University he enjoyed most of his teaching career at schools in Dunedin and Auckland. He returned to Rarotonga in 2009, and 12 months later, seized the golden opportunity to return to his birthplace as the principal at Rakahanga school for three years.

He says during his time on the unspoilt atoll 1,200kms north of Rarotonga, he attended the most idyllic “university” in the world.

“My major was learning how to live off the land and sea, while being consciously aware of the power of God. Here too I witnessed the importance of making time for family and extending love to all people.

“I returned to Rarotonga in 2013, having an even greater appreciation of our beautiful environment and people.”

But he says the thing that brings him immense joy today, is providing a safe and memorable experience for families, couples and friends to swim with the “magical turtles”. And his one-of-a-kind tours genuinely deliver a unique underwater experience of the kind you’re unlikely to encounter in many other parts of the world.

Guests first learn safety tips for entering the deep water Avaavaroa passage, a reef break on the south western side of the Island where turtles and eagle rays enter directly from the ocean at high tide.

Then for fun, and to get the marine life excited, “super-yoga grandad”, as Piho’s also famously known, encourages his visitors to do a turtle dance and chant in Cook Islands Maori, “onu, onu, onu”.

The vibration through the sand he claims, sends ripples out onto the lagoon to draw the turtles in, imitating an ancient practice performed by Aborigines in Australia.

Piho safely tows his guests out across the lagoon on SUP boards to the crystal-clear waters of the passage. He says he watches over his visitors as if they were his own children.

The idyllic setting has the backdrop of majestic and lush green mountains running down to the white sandy shoreline around 150 metres away.

Guests are left free to snorkel and completely submerge themselves in the main feeding ground at the aptly named “turtle café”, where many onu, large and small, graze on their staple sea grass.

You may even be lucky enough to spot “Charlotte” a large adult female named after Piho’s daughter who discovered the turtle motionless on the coral below.

She later found a baby was sheltered beneath its mother, and in a role reversal, Piho also nicknamed the pint-sized turtle Suzanne after Charlotte’s mum.

Swimming with turtles is very hard to express in words other than “amazing” or “life changing”.

In fact, Tuhe says, the Chinese and Japanese believe if you see one, you will indeed live a long life. And for the Hawaiians, it’s a super-spiritual experience.

The turtle tour is a magnificent way to experience marine life in Rarotonga and will leave you feeling happier than when you arrived on the island, says Piho.

The marine animals effortlessly propel themselves in and out of the passage as generations of them have done for hundreds of years and to witness them in person is a truly meaningful bucket list experience.

The tour is finished off on shore with Piho’s guests sharing their personal turtle tour highlights bound in a circle of unity. Arm in arm his guests relate their memories of their turtle encounters.

He says visitors return home much happier than when they arrived on the Island after seeing the turtles up close.

But if you do get a little down after returning to the “rat race”, Tuhe has a solution to beat the blues.

His last “Magical Mermaid” smoothie has the perfect blend of ingredients to make you feel good again. Combining at least three of his banana, pawpaw, soursop, passion, or star fruit ingredients.

“When you return to where you come from, and if ever you feel sad, this drink will kick in and remind you of the wonderful times you had in Rarotonga and make you happy again.”

From his delicious drinks to his tantalising turtle tours, Piho has truly perfected a simple recipe for happiness for people of all ages.