The famous $3 note: Ina rides her shark into the sunset 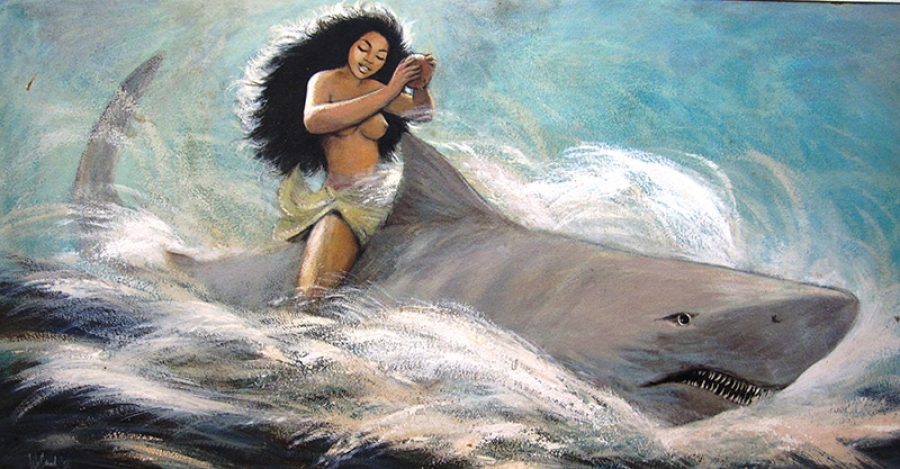 Rick Welland painted the image on the $3 bill – but recently, his widow gave away their last one.

It was a reluctant decision. Rick Welland entered his artwork in a competition for the Cook Islands’ $3 bill only under duress.

Little did the renowned painter know his creation would be permanently enshrined on one of the country’s most sought-after souvenirs.

There are few of the bills left in circulation, but they are popular among visitors and locals – so much so that government last year provided $450,000 in the Budget to reprint more of them.

The design of the bill has been adopted from a painting by Rick, who passed away in 2016. The painting depicts the Cook Islands legend of Ina and the shark.

Gwen Welland says her ex-husband was pleased to have his painting adopted on the unique $3 bill, in 1992.

“They were having a competition for the currency and a friend of ours, who was here, said to Rick that he should submit,” she says.

“Rick was very reluctant to do it but he talked him into submitting it and he won the competition. That’s the story behind how his art got on that bill.

“He was pleased about the fact that the bill was widely circulated and very popular.”

In his blog, Rick posted: “The bill proved to be quite popular – and for ‘inspiring it’ I was given 50 of the $3 bills, most of which I gave away to friends.

“Hearing a rumour and checking on EBay I found that those $3 bills were now fetching nearly $300 dollars as a ‘collectors item’ … hmmm. Who would have known?”

Rick, from California, visited Rarotonga in 1962. He instantly fell in love with the island and decided to make it his new home.

During his 28 years on Rarotonga, he painted his journey as well as inspired pieces on Cook Islands culture and heritage.

The Ina and the Shark painting is among one of his finest works. It was initially sold to Ben Bergman of Bergman Gallery before it changed hands.

Rick moved to Mexico in 1990 and returned home to Rarotonga several years later for his final exhibition before passing away on March 12, 2016.

Gwen says she always carried a $3 bill in her purse until recently, when she gave her last one to one of Rick’s nieces.

“I used to carry them with me and give it to people who knew Rick.”

Their daughter Diya Welland, who arrived into Rarotonga from United States just before the Covid-19 crisis forced the cancellation of international flights, still carries the Cook Islands $3 bill with her.

Diya says during a trip to Oregon, her $3 bill evoked an emotional Cook Islands memory of a woman who had visited the country many years ago.

The legend of Ina and the shark

Folklore has it that in Eastern Polynesia there was a god of the Ocean called Tinirau. He lived on a floating island called the Sacred Isle Motu-Tpau and his loved one Ina is told of in a song from the island of Mangaia.

The story goes that Ina plunged into the sea to search for Tinirau and first called on the fish to help her. They were too small and she was tipped into the shallow lagoon. Four attempts got her no further than the outer reef and the fish that tried to help her were permanently marked by the beatings she gave them. Then a sea-going shark agreed to carry her on his back.

On the journey she felt thirsty and the shark raised his dorsal fin so that she could crack her first coconut. This she did and satisfied her thirst. Again she grew thirsty and this time, as depicted in the design, she cracked the coconut on the shark's head. At once the shark shook her off and dived and she was only rescued when Tekea the Great, the king of all sharks, rose from the depths, drove off the other sharks, and took her to Tinirau’s island. However the blow she gave to her first benefactor raised a bump on the shark’s head and to this day that is called Ina’s bump. – supplied by Ben Bergman