Separated from my family, isolated in barbed wire-fenced ‘hot facility’ 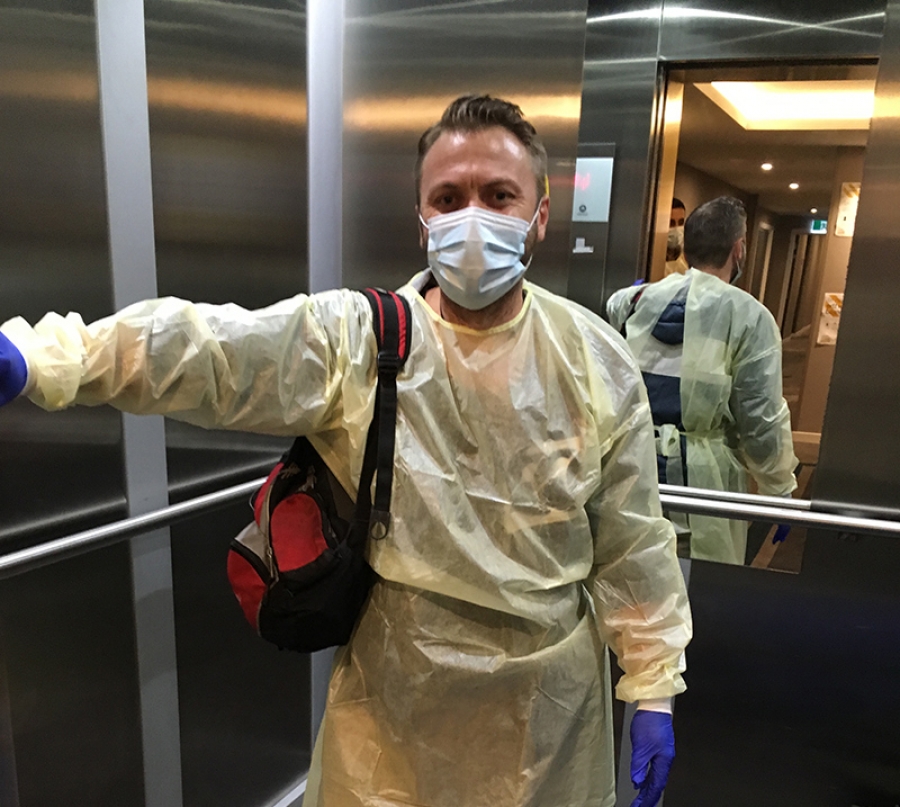 Shaun Bamber is fitted out in PPE (personal protective equipment) and whisked into a high-risk 'hot facility' at just half an hour's notice. 20041710

Shaun Bamber’s small daughter was med-evaced from Rarotonga to New Zealand before the coronavirus border lockdown. Now, he tells of his long journey to join his family again.

I haven’t seen my wife and youngest daughter in more than two months.

The last time I saw my daughter – our five-year-old Eden – she was unconscious and strapped to a stretcher in the back of an ambulance parked up on the airport runway.

I watched from behind the chainlink fence as her little body disappeared into the belly of a waiting Air New Zealand Boeing 787 – the Dreamliner they call it.

That was on February 9. Back then Covid-19 was just the coronavirus and people were still posting silly memes about beer. Things are a tad more serious now.

Our daughter hadn’t fallen victim to Covid-19 of course. At that point there were just a few hundred cases outside China and even now the Cook Islands, home for the past two and a bit years, is one of only a small number of countries to remain officially free of the virus.

Instead, it was a kidney condition known as nephrotic syndrome that led to my daughter’s evacuation from Rarotonga to Auckland’s Starship Hospital.

Nephrotic syndrome is typically treated with daily doses of prednisone, a steroid which works by suppressing your immune system, reducing the body’s ability to deal with various pathogens – including viruses.

A month later I was back at the airport, this time saying goodbye to our two older children, 11-year-old Cole and six-year-old Tiana.

They were both missing their mother (and little sister), so I decided to send them to New Zealand with some family friends heading over to attend Auckland’s ill-fated Pasifika Festival.

The day they arrived, the World Health Organization declared Covid-19 an official pandemic.

Over the ensuing weeks, gradually escalating border controls implemented both here and in New Zealand resulted in Rarotonga’s international flight schedule being reduced from 16 flights a week to just one.

Our border was also closed off entirely to any and all inbound air passengers, meaning it is still possible to fly out of the Cook Islands – but no one is allowed back in.

It was a tough call to make, but I made it, leaving our home and most everything we own behind to start what – thanks to New Zealand’s mandatory quarantine – would be a minimum 14-day journey to see my family again.

And now here I am.

It’s grey and drizzly at the moment, but I have managed to get outside for my first taste of fresh air and sunshine in four days.

I am accompanied on my brief excursion by a burly civil aviation officer, roped in as babysitter for me and the other hundred or so occupants of Auckland’s only “hot facility”, the Jet Park Hotel in Mangere, set aside for those under strict quarantine conditions.

It’s one of 18 hotels commandeered by the New Zealand Ministry of Health since mandatory quarantine came into effect on April 9.

Police officers stroll the grounds, which are bordered by a barbed wire-topped fence and guarded at the entrance by security in high-vis vests.

Two police – tasers on hips and pepper spray in belts – stop for a chat and I learn that one of them spent a week in Rarotonga last year on assignment with the Cook Islands Police and Customs, working on something to do with seizures of cash at the border.

I also learn a bit about the relative pain-inflicting potential of the weapons they carry.

“If it ever comes down to it, you definitely want to be tased, not pepper sprayed,” explains the chattier of the two officers.

Good to know I guess.

It wasn’t always like this. Originally I’d been placed in The Sebel hotel in Manukau, with much lighter security measures – masks were not compulsory, you were allowed outside unaccompanied, we had our own room keys (not an option at the hot facility, so you can’t leave your room without locking yourself out).

There was generally a less ‘institutional’ feel to the whole place.

The food was also a darn sight better too – bacon and eggs for breakfast most days, sometimes sausages, waffles, pancakes. Here it’s WeetBix and an apple.

Then I went and told them I had a sore throat. (It’s part of a checklist of possible Covid-19 symptoms they run through with you every now and then.)

I was promptly confined to my room for 48 hours and they started closely monitoring my temperature, pulse rate and blood pressure.

All these vitals remained at normal, healthy levels – but the sore throat persisted.

“Pack your bags,” they said. I had to be ready to leave in less than an hour.

Kitted out in full PPE gear – mask, gown and gloves – I was whisked away to my new temporary digs.

Upon arrival two nurses swabbed me for Covid-19, which involves the insertion of a slender but roughly 15cm-long probe up your nose and down into your throat.

Luckily (or possibly not), my deviated septum – the result of two broken noses in my teen years – made the nose insertion option somewhat tricky, so they just stuck the whole thing straight down my throat instead.

I tried to keep my gagging and choking to a minimum while they held it there for a slow count of 10. Results in two to five days they said.

Funny thing is, no one has actually had a look at my throat yet.

So that’s my quarantine story so far. Highs and lows really. OK, so mostly lows. But all necessary. All important.

I’m not sure when I’ll see our island home again.

But I know I’ll see my family soon.

And that makes it all worthwhile.