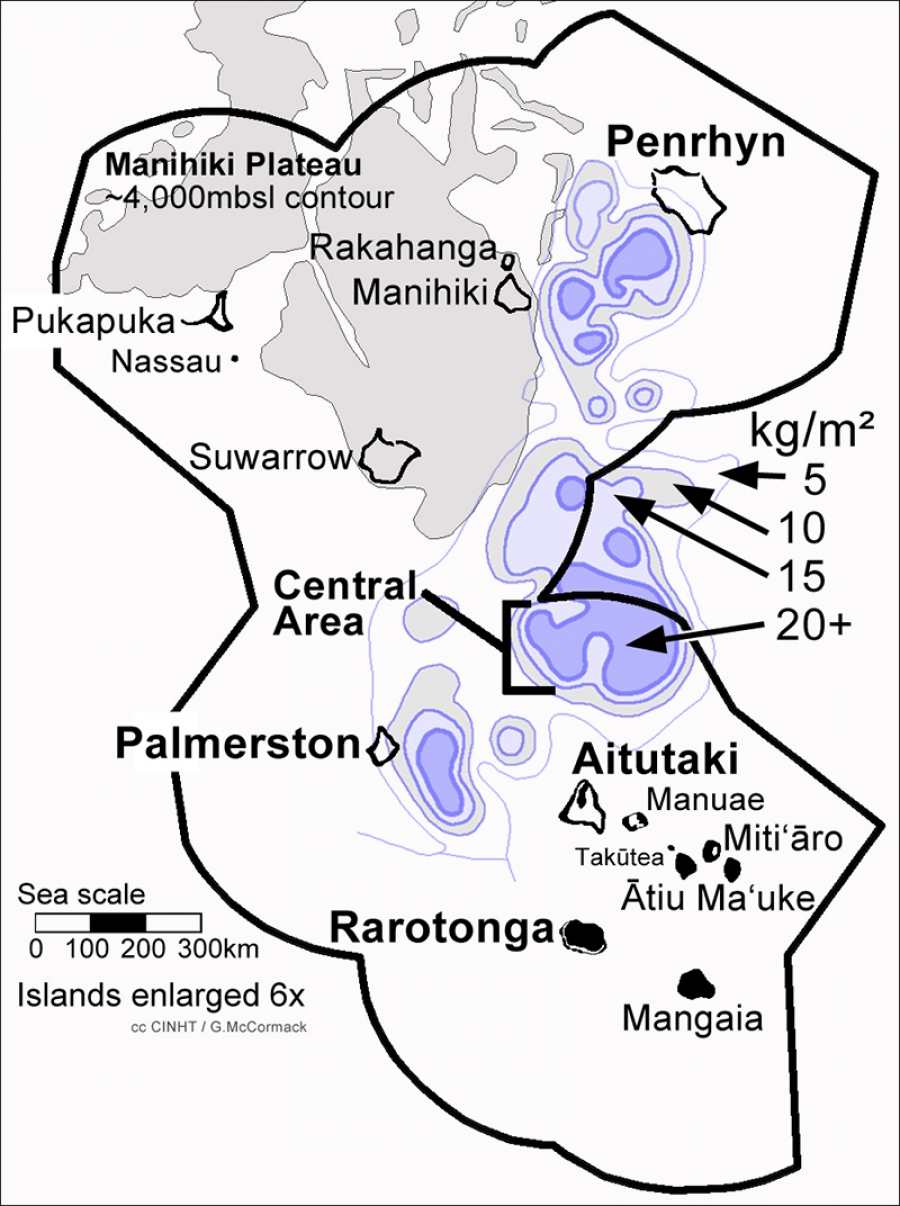 The Cook Islands EEZ with islands enlarged. Nodules are mainly between Penrhyn and Aitutaki. The Central Area has more than 20kg of nodules per square metre. 19050803

to activities that could cause adverse impacts on the environment. Furthermore, when an activity could have major adverse impacts it should be preceded by an Environmental Impact Assessment (EIA).

Deep-seabed mining could have major adverse impacts on the environment and should be preceded by an EIA. In contrast, deep seabed exploratory activities, as demonstrated over the past 50 years in the Cook Islands' and the Clarion-Clipperton Zone (CCZ) nodule fields, have minimal impacts and would not normally require an EIA.

This article outlines the environment associated directly and indirectly with the polymetallic nodules in the South Penrhyn Basin (SPB) to identify aspects of the environment that could be negatively impacted by mining. These aspects of concern should be the main environmental focus in the EIA before mining is approved.

Cook Islands nodules are mainly in the South Penrhyn Basin (SPB) between Penrhyn and Aitutaki. The highest density is in the Central Area which is roughly 200km diameter with its southern edge nearly 200km north of Aitutaki. For comparison, Aitutaki is 260km north of Rarotonga. (See map and seafloor illustration.)

For some years it has been thought that an economically viable mine would need to produce 2.5 million dry-tonnes of nodules per year for 20 years, and we can use this as a basis for discussion. Rarotonga has an area of 67km² and in the Central Area one mine would harvest 2.5x the area of Rarotonga each year or 50 "Rarotongas" in 20 years.

Using 2015 mineral prices, one mine on a basic raw material royalty of 3 per cent would reap the Government about US$45 ($68) million annually, considerably more than our fisheries and about 30 per cent of our tourism revenue. It is difficult to imagine how the government or the majority of residents could permanently ignore this opportunity – it is just a matter of when.

Government's acceptance of the Precautionary Approach means it should move cautiously forward with a single mine and its approval will be preceded by an EIA with public participation. If the mine proved to be environmentally acceptable a second mine could be considered.

Of course, I speak of an ideal world. More likely this revenue stream will follow in the footsteps of our present main revenue streams – more is better. Ironically, more mines are predicted to lower significant mineral values and make all mines less viable.

The nodules are on the deeper plains of the South Penrhyn Basin (SPB) at around 5200 metres below sea level (mbsl) or 5.2km deep. Sunlight does not penetrate more than 1000mbsl and below this point it is pitch black, with no photosynthesis hence no plant plankton. Only animals and bacteria can live in the pitch black depths; and the basis of their food chain is the dead plant plankton and animal remains sinking down from the surface waters.

For perspective, 5000m or 5km is the distance from the Ministry of Health in Tupapa to the Meteorological Station at the Seawall. Microscopic plant plankton and commercial fishing cease before Action Man's home at 0.3km. Toothed whales often hunt down to Trader Jack's at 1km where it is pitch black, and a few sometimes reach St Joseph's Road (1.5km). Through the next 3.5km to the Met. Office there are only a few sluggish animals mainly using bioluminescence for hunting and communication. At the Met. Office you hit the seafloor and its nodules!

Unfortunately for the seabed creatures in the SPB, there is a meagre supply of falling food because the surface waters have relatively few plant plankton and animals. This is not caused by a lack of sunlight, of which we have an abundance, but by a lack of minerals. The shortage of nitrates and phosphates for photosynthesis causes a scarcity of microscopic plant plankton (microalgae), causing a scarcity of animal plankton, causing a scarcity of small animals – simply put, it's a biological desert. But, yes, wonderfully clear waters for divers.

In 2000, Japanese researchers sampled the animals on and above the seafloor and in the sediments. It was a minimalist survey but it gives us an idea of what lives in and around the Central Area nodule field. The video cameras found very few animals living on the seafloor or swimming immediately above it. In the sediment they found seven species of tiny animals, usually less than 5mm long, and all living in the top 2cm of silt.

There is a need for more research on seafloor animals in the SPB and this could be undertaken as part of the Exploratory Licenses. How many species did the Japanese miss? And, most importantly, are there any seafloor animals with restricted ranges that could be pushed nearer to extinction by mining?

Zero extinction is the government's commitment as a party of the 1992 Biological Diversity Convention (CBD).

The global shortage of taxonomic scientists means many seabed species will not be studied sufficiently to give them Latin names. However, using agreed upon colloquial names, such as "black-tailed shrimp", scientists can still compare species in different samples and identify those with restricted ranges, namely, those more vulnerable to extinction.

Colloquially named species can also provide sufficient information to establish ecological equivalence of areas to designate a suitable Biodiversity Preservation Area (BPA) near any mine. The BPA can ensure zero extinction and, if it is upstream of the mine, larvae could eventually repopulate the site.

Probably of greater biological significance is that mining will be a patchy affair because of seafloor irregularities; many areas within a concession will be left with undisturbed nodules and sediment for seafloor animals.

After recording Cook Islands biodiversity for nearly 40 years, I am acutely aware we allow widespread habitat alteration on land for dwellings and infrastructure without adequate knowledge of its effect on small plants and animals. These small plants and animals have not been well studied, we do not know all the species with restricted ranges - we often do not know what we are destroying. Of course, this does not justify similar destruction on the deep seabed, but it shows the problem is not restricted to the deep seabed. We need a lot more biological research on land and in the sea.

In addition to the meagre supply of falling food for species on the deep seafloor, there is also a shortage of carbonates to build shells and exoskeletons.

The absence of carbonates is caused by the Carbonate Compensation Depth (CCD) at about 5000mbsl at which all falling carbonate material is dissolved by the extreme pressure, low temperature and high acidity. As a result, animals with carbonate exoskeletons are absent from the nodule fields of the Central Area, and the nodules lie on a reddish volcanic silt rather than a pale calcareous ooze.

It must hit everyone as strange that the Cook Islands has this immense concentration of nodules while they are scarce in neighbouring Niue, Tonga, Samoa, Kiribati and French Polynesia. Furthermore, Cook Islands nodules are abundant in the deep SPB east of the Manihiki Plateau but rare in the equally deep Samoa Basin south of the Plateau.

Obviously there is something unusual about the SPB.

The main factors involved in SPB nodule development are the abundance of oxygen in the Antarctic Bottom Water (AABW) with an abundance of dissolved minerals, possibly from Southern Group volcanism, and its great depth preventing the formation of a carbonate ooze to interfere with nodule growth. Nodules range from 1cm to 8cm with the latter marking the beginning of nodule development about 20 million years ago with growth continuing to the present day.

Although deep seabed mining has not occurred anywhere, it already has a bad reputation with environmentalists. This is mainly because the first deep seabed proposal (Solwara I) was for mining Seafloor Massive Sulphides (SMS) at 1600mbsl, a mere 30km from New Ireland off the north coast of PNG. It is a geologically active area with very high biodiversity, included many restricted range species. The mining license was given to Nautilus Minerals in January 2011 and after many ups and downs the company is presently working to stave off bankruptcy.

Mining SMS in PNG is totally different in mining method and environment from nodule harvesting in the South Penrhyn Basin.

The seabed minerals area from which we can learn most is the massive Clarion-Clipperton Zone (CCZ) nodule field in the central eastern Pacific managed by the United Nations' International Seabed Authority (ISA). This field has undergone extensive research and experiments since the 1960s and ISA has allocated 17 large exploratory concessions, each nearly four times larger than the whole Central Area of the SPB. Six of the concessions were meant to start mining in 2016 but were given extensions because of low mineral values.

Although the CCZ is nearly equivalent to the SPB it is also distinctly different in having much more productive surface waters, much more abundant and complex seabed life, and a silicate ooze partially covering its nodules which have a different composition and method of growing.

Despite these differences in seafloor biodiversity and nodule growth we can learn a lot from the CCZ's 50years of research, experiments and harvesting proposals to identify likely negative impacts to focus our Precautionary Approach.

The illustration shows the seven possible impacts of concern. In any EIA the environmental focus should be on the proposed level of each impact and making decisions about what is an acceptable level. These focal concerns apply regardless of how nodules are collected and uplifted to the surface.

The area of most concern is the uplift of the nodules and the fate of waste material, either seafloor water or seafloor sediment. The uplift should not contaminate the water column with sediment which could clog feeding mechanisms and reduce light penetration.

In particular, there should be no release of nutrient rich bottom water or sediment in the surface waters where they would cause an uncontrolled algal bloom that could increase toxins and decrease oxygen to cause a mass die off of marine animals.

The second area of most concern is the size of the seafloor sediment plume caused by the collectors, and the return of any sediments taken to the surface. Sedimentary plumes should be as small as possible because the settling sediment will smother sedentary animals. Settling sediments would hide nodules making harvesting more difficult, which means miners also have an incentive to keep plumes small.

The mining technology proposals presently under consideration are unlikely to generate loud noises of any frequency. Nevertheless all noise should be minimised and monitored to ensure there are no loud high-frequency noises to interfere with the communication or prey-echolocation systems of sperm whales and their toothed relatives; nor loud low-frequency noise to interfere with the communication of humpback whales when they visit from June to October.

In taking a holistic view of our adverse environmental impacts on the land and in the sea to maintain or increase our quality of life, I conclude that the likely impacts of a single deep seabed mine run in a Precautionary Manner would cause only a slight increase in our negative environmental impacts. And if such a mine could reduce our economic dependence on ever-increasing tourist numbers it would probably reduce our overall negative impacts in-country and, in particular, the large carbon footprint associated with flying here.