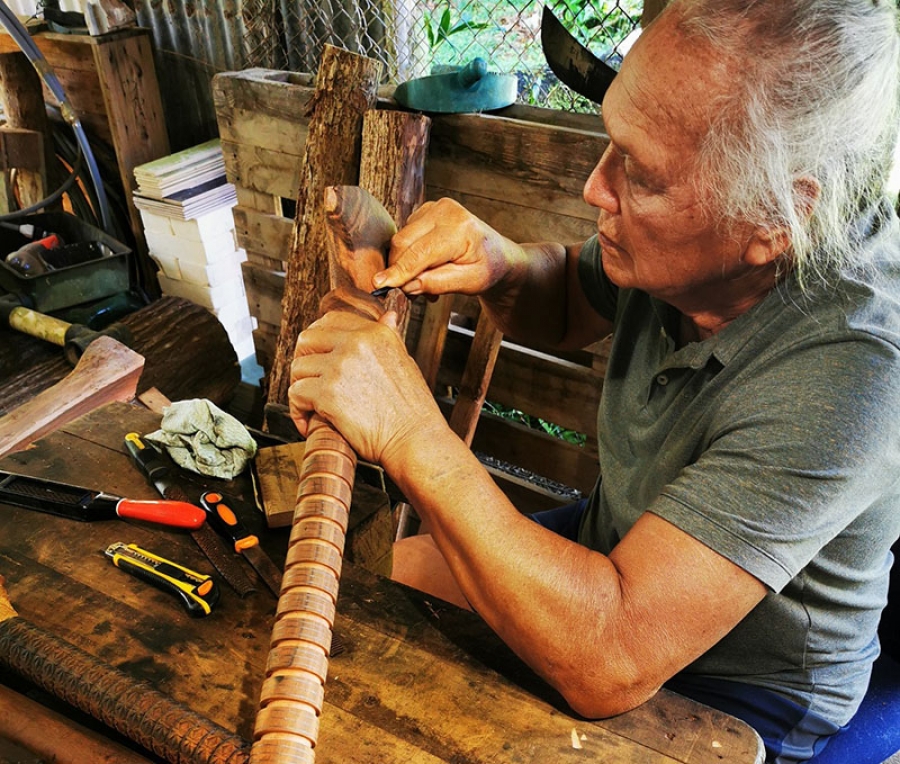 The first Mangaia artwork Allan Tuara crafted was a pedestal adze, for his daughter Jackie Tuara for her 21st birthday and graduation in 1990.

Jackie, now in her 50s, says it’s the most precious thing she possesses.

“He had found the adze which makes it almost spiritual, it’s my pride and joy,” she says.

“He is so particular, very detailed. I think all artists, don’t appreciate how skilled they are at their craft.”

Allan Tuara was born on Mangaia, his father is part Mangaian and Rarotongan, and his mother is Scottish-Irish.

In 1958 he left the islands for New Zealand as part of a scholarship to train as a dental technician.

He also loved music. Returning to Rarotonga, he joined the Vagabonds band playing a variety of music.

Creativity runs in his family, so naturally Allan taught himself the skill of carving.

But it wasn’t until a request from his daughter to carve a Mangaia ceremonial adze for her birthday, that he looked at it a bit more seriously.

“I found I enjoyed the challenge.”

He is inspired by the challenge to create something beautiful and lasting and he finds that in the Mangaia art forms.

Allan, who has a passion for art and Mangaian history, produces beautiful replicas of traditional Mangaian ceremonial adzes, as close to the original designs as possible.

Having learned that all Mangaian fine art was taken away from the island by the missionaries, he was moved and saddened.

Hours of concentration are spent on his creations, each motif has been intricately carved, the fine sennit carefully woven and every basalt adze head is carefully chiseled.

Allan says the right rocks, best quality, are only found from a stream in an area in Mangaia called “Mata’are”. This is the rock also used for his toki, a traditional Mangaian adze.

Allan prefers to use native wood, mostly hard aged miro, and stone, because of the precision they demand.

“Once you have started your move, there is no second run. That taught me to be precise, concentrate and have lots of patience.”

At the completion of a crafted piece, “I am satisfied with the result of my work, I feel happy to have done the best I could and I hope the customer feels happy too – that makes it better all round.”

His crafts can be seen and purchased at Jackie’s store Moana Gems at Taputapuatea.