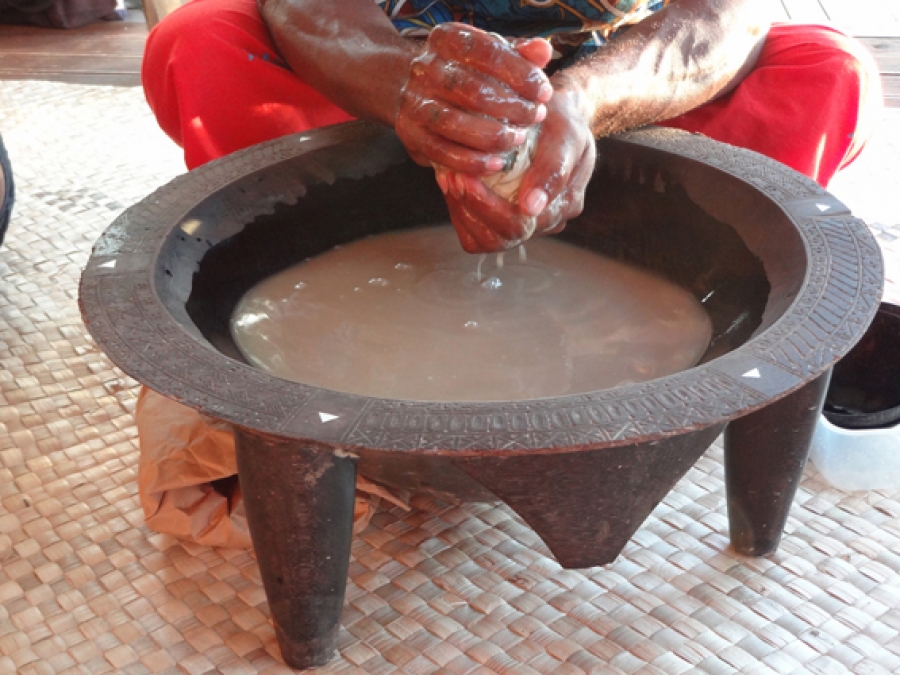 In its drinkable form, kava is believed to poses mana, or spiritual power. Both the plant and the drink are accorded much respect in many parts of Pasifika. 16061030

When CI News published a story recently about licencing problems faced by a new Rarotonga business based on the ‘traditional’ tumunu or bush beer, it grabbed the attention of University of Waikato researcher Dr Apo Aporosa. He offered to write a feature story on the original practices and traditions of the tumunu which were based not on bush beer, but on kava. Dr Aporosa is related to the village of Macuata in Northern, Fiji. His adopted sister is related to Aitutaki. His work at the Hamilton, New Zealand university includes teaching on kava and identity. I HAVE a friend here in New Zealand.

He is half Rarotongan, half Aotearoa, Māori. He is very involved and passionate about both Māori cultures. Several months ago we were drinking kava together and I told him I was heading up to Rarotonga.

My ancestry is Fijian although my adopted sister is Aitutaki’an, and mum now lives on Rarotonga; so my wife and I were heading over for the first time stay with mum. My mate replied, “Every time I go home (to Rarotonga) I get very sad about the loss of culture and the excessive alcohol use and violence that goes with it. I would love to see kava return to Rarotonga to provide us with a space like this to talk about culture.”

My mates comment was very interesting to me as my area of research at The University of Waikato includes Pasifika cultural expression, particularly the kava culture and its role as a unique icon of identity for Pasifika peoples.

My mate added, “My interest in kava and revitalizing this tikaanga ritual and ceremonial practice is to facilitate the affirmation of papaanga or genealogy connections with toketoke enua families and our collective responsibility to maintain the mana and tapu and mauri of relationships to the myriad of past, present and future generations.

“For me, kava presents opportunity for us to celebrate and affirm our indigeneity to te ou enua o tumu te varovaro, Rarotonga, and resonates better with me as a platform for chiefly discussion.”

I headed off to Rarotonga keen to understand first-hand my mate’s concerns. I spent many hours with both locals and Pasifika migrants (some working in the tourism industry) discussing culture and kava. Some were very thought-provoking.

For instance, I was asked about the name of their island group; the Cook Islands and why they were named after an English explorer, something that tended to reflect colonial dominance, instead of the local culture and ancestry. Therefore, in honour of these I discussed this with, I will use the name Te Ao Maohi to refer to the greater Rarotongan island group which includes Pukapuka and its accompanying islands in the north and Mangaia etc in the south.

In addition to discussion about Te Ao Maohi’s colonially-enforced name, there were also suggestions by some of the need for greater autonomy, self-determination and decolonisation. While discussion of this nature can make some uncomfortable, viewing comments of this nature as radical, what was clear from all Te Ao Maohi I spoke to, was a desire to reclaim traditional expressions of the culture as part of their identity to assert nationalism.

Since arriving back in New Zealand I have noted that hardly a day goes by without an article on culture appearing in the Te Ao Maohi (Cook Islands) News.

This included a very interesting story two weeks ago (Cultural identity and the ‘brown economy’, May 21) in which Thomas Tarurongo Wynne asked whether Te Ao Maohi culture is being exploited through commodification by the tourism industry. But the story that really grabbed my attention was the closure of the Atiu Tumunu in O’oa, Tupapa (Business hindered by ‘rules’, May 26). In that article, local businessman Terry Rangi said that the aim of the Tumunu was to introduce “a unique island experience that models itself on the practices and traditions of the tumunu culture in Atiu.” That got me thinking; tumunu today serve bush-beer, an alcohol introduced to Te Ao Maohi in the early colonial period whereas the original practices and traditions of the tumunu were based on kava. If Te Ao Maohi want to re-establish traditional cultural practice as so many say, something which is also a hot topic in the Te Ao Maohi (Cook Islands) News, why not do that through the reintroduction of the kava culture?

I will discuss that shortly, but first, a little about kava:

Kava is a drink made from the roots and basal stump of the Piper Mythisticum plant. Botanists believe kava originated in Vanuatu and was transported throughout the Pacific, from Papua New Guinea in the west to Te Ao Maohi and Hawaii in the east – with the exception of Australia and New Zealand, approximately 3000 years ago by way of early migrational spread.

Even today, in many parts of Pasifika, kava users treat this indigenous substance with a great deal of respect, and use it to support almost every event from birth to death. This includes events like the blessing a new-born, as part of confirming chiefly installation, to consecrate a new house, to protect people when they travel, as part of seeking forgivness, to show appreciation, and in places like Fiji, even to open a school sports day. Additionally, kava use practice is strongly associated with respect for one another and the kava environment, and this adds an additional level of meaning and mana to spaces and situations where kava is used.

Kava also has a number of proven medicinal properties and has a long history as a traditional medicine throughout Pasifika. Essentially, kava is used for everything and anything that Pasifikans believe needs to be infused with mana.

Kava’s value to medicine is not limited to its traditional use. The pharmacological industry have recognised kava’s value as an anti-stress medication with doctors prescribing kava for Generalised Anxiety Disorder whereas a number of studies are currently underway looking at kava’s effectiveness in cancer research.

Most importantly though for most niVanuatu, Fijian, Tongans, Samoans, and increasingly indigenous Hawaiians, kava is one of their most potent icons of identity, a plant and drink that uniquely represents who Pasifikans are.

So how does kava affect you when you drink it? Firstly, kava is not alcohol - it is not even fermented, and does not affect you in the same manner as alcohol. Kava provides a subtle relaxed feeling that lacks euphoria or marked emotional change. It’s kind of like being alcoholically “intoxicated” in your body although you feel clear-headed and very relaxed.

Kava drinkers do not get hyped-up, disinhibited or aggressive as some often do with alcohol. Put simply, kava cannot be used as an excuse to commit a crime. Instead, kava allows quality conversation, a reason why it has been used in some setting to facilitate therapy. This is the reason my Rarotongan Maori friend stated kava “resonates better … as a platform for chiefly discussion.”

So what happened to kava in Te Ao Maohi, the “greater Rarotongan island group?”

Until the arrival of the early colonials, there were no alcoholic beverages in the Pacific. Kava was the traditional drink and this included its use in Te Ao Maohi.

Unfortunately, not a lot is known about pre-colonial kava use in Te Ao Maohi. This is because kava use was eradicated by the early missionaries who believed that its use and related practice would hold back the people of the islands from progressing toward modernity. Mangos &amp; Utanga add, “by the end of the (19th) century Christianity had thoroughly replaced the traditional belief systems and practices... For a culture founded on oral traditions, this was a body blow akin to the burning of libraries in Western culture”.

Only glimpses of pre-colonial kava use remain. For instance, Te Ariki-tara-are’s described in 1920 remember seeing a traditional Rarotongan priest slapping a tribesman with kava leaves as part of spiritual healing.

As kava was removed, it was replaced by bush beer, the making of which was taught to the Te Ao Maohi by early mariners and traders. What is interesting though, is even today in some tumunu where bush-beer is drunk, aspects of traditional kava consumption practice can be seen in bush-beer drinking.

For instance, I have seen photos and heard accounts of bush-beer drinkers sitting cross-legged in a circle drinking bush-beer from a kava-type kumete (wooden bowl) from half-coconut shell cups, practices that could be mistaken for traditional kava use. One major difference is though, I have also heard of trouble at tumunu resulting from bush-beer/alcohol intoxication, something that does not happen with kava use.

That raises an interesting point; the missionaries removed kava as they saw this as being “primitive” and not modern. Alcohol was introduced and as we know, causes major socio-cultural disruption and violence. Kava does not do this. So which drink is more “primitive” considering bad behaviour is often framed as “native?”

Kava is the ‘cultural keystone species’ and indigenous substance of Te Ao Maohi, not bush-beer/alcohol. Kava is also a potent icon of Pasifika identity, unique to the people of the Pacific. The reintroduction of kava to Te Ao Maohi can provide not only an authentic reflection of traditional culture, but its use patterns have the ability to facilitate discussion on cultural revitalisation. This is something the euphoric emotional haze of alcohol cannot do.

Additionally, there are still a number of very old kava plants growing in the hills on Rarotonga. Kava use by both Pasifikan’s and non-Islander’s is increasing, offering Te Ao Maohi an opportunity to not only re-establish their traditional kava cultivars for their own use, but to also add to the global kava market which is expanding.

Te Ao Maohi are actively seeking to expand their identity through authentic cultural expression. Why not then reintroduce kava which has the ability to facilitate cultural expression, a practice based on respect which would also provide visitors to Te Ao Maohi “a unique island experience that models itself on the [real] practices and traditions of the tumunu culture,” to quote local businessman Terry Rangi?

Why not get rid of the ‘bush-beer/alcohol culture’ introduced by colonials, a ‘plastic papaa culture’ that causes socio-cultural disruption and violence in which people are disrespected? Te Ao Maohi (the people of the greater Rarotongan island group) are Pasifikans.

We are waiting for you to come back and join with your Pasifikan kava using family and put your Pasifikan icon of identity (kava) back where it belongs.