Never mind if your hands get all greasy’ 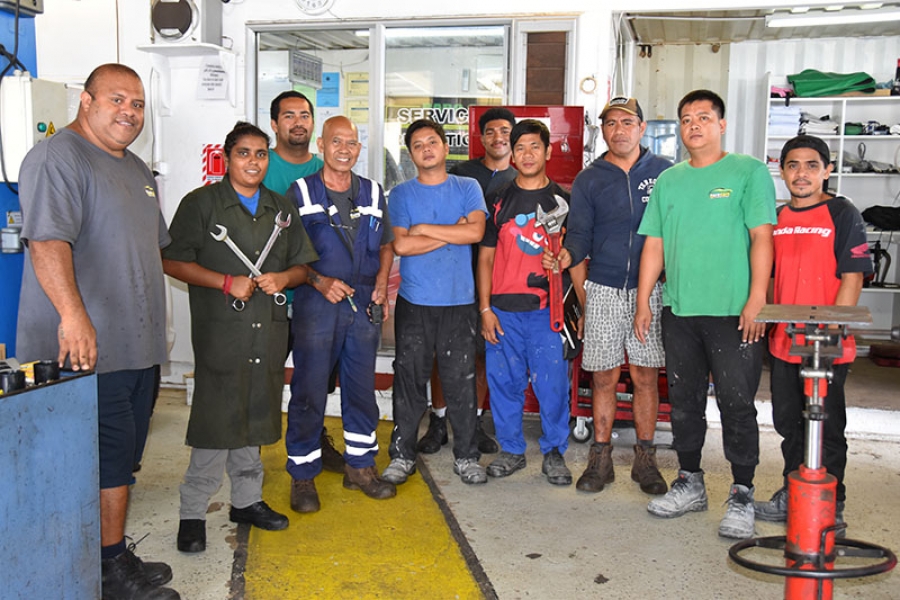 Ranjeeta Singh and, behind her, Nathan Matata with the workshop team at Raro Cars. 20022821

The only woman mechanic on Rarotonga has already inspired the men she works with.

As a little girl, Ranjeeta Singh would sit around their home garage, watching her dad repairing tyres and cars.

An only child, she loved keeping her father company as he worked.

She picked up a tool to fix her very first tyre when she was in year 7, while her dad, a mechanic, guided her through the process.

It was after high school that he asked her what she wanted to as a profession.

“So, I said I wanted to be a mechanic,” she laughs.

It was not what he expected.

Singh is a rose among the thorns. That’s what they now say about the 25-year-old. She’s the only female automotive mechanic in Rarotonga, according to her employer Raro Cars.

Singh, an expat worker, arrived from Fiji a week ago, eager to pick a tool and muck in with the big team of mechanics at Raro Cars.

And already, she’s inspired local mechanics who are fighting for the opportunity go get internationally-recognised qualifications.

And that’s music to the ears of her fellow mechanics.

Nathan Matata featured in Cook Islands News earlier this month, pleading for the chance to qualify here on the island. “I don’t want to be known as some bush mechanic,” he said then.

Matata is a well-respected automotive engineer in the Cook Islands, but doesn’t have the piece of paper that he believes will get him taken seriously overseas.

When the Raro Cars team heard a woman was coming over to join their team, he says they found it interesting. Now, they treat her as a sister.

But they all do the same job, he explains.

“We don’t treat her differently her just because she is a girl, we work together to achieve our goals and get the job done as a team.”

He hopes the government will set in place a student loans scheme, allowing him to spend a year studying fulltime to complete the theory required to become an A-grade mechanic.

And with the arrival of Singh, Matata believes she is setting the standard for him and other locals to get the qualification they need.

Wielding her wrenches in a male-dominated workplace is not new for Singh, and she simply hopes to gain more experience and learn from the team at Raro Cars.

“I was nervous and excited when I came. I was told I was the only female mechanic, I was like ‘Oh really, wow!’”

Being here without family, Singh says she is taking each day at a time, as a challenge.

“I am excited to learn new things. To work with new tools and a new group of people.”

She calls on young women to pursue their aspirations.

“If you have a dream, follow it. Don’t hesitate, it’s the 21st century,” she says. “Take the challenge and be a mechanic, never mind if your hands get all greasy.

“Dad and mum encouraged me to never give up, no matter how hard life is or gets.”