Nan Hauser: ‘My disease scares some people – but I love my life’ 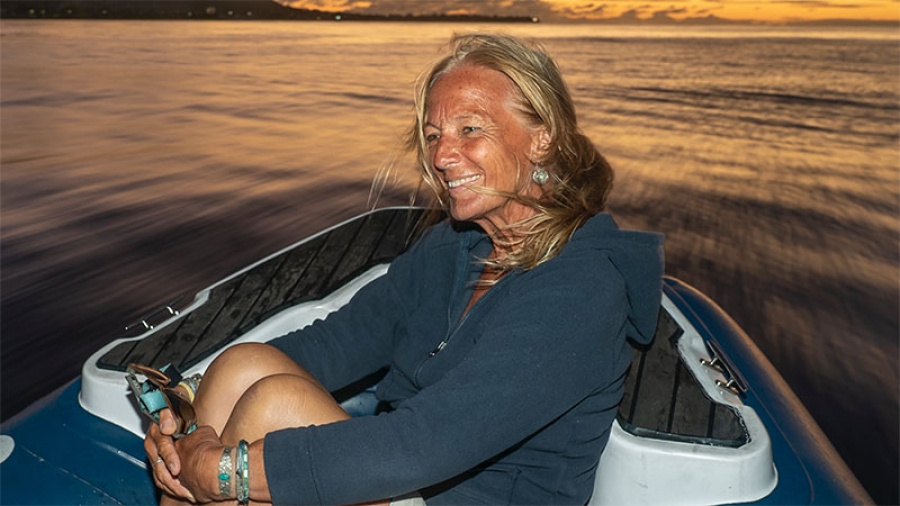 Nan Hauser in her happy place, observing humpback whales in the ocean off Rarotonga. 20062609

Rarotonga whale researcher Nan Hauser speaks up for the first time about living with epilepsy and fighting the stigma against disabilities.

When I was 22 months old, I climbed onto the milk box on the back porch of my family home.

I leaned over the edge of the railing which took me diving 12 metres headfirst, landing on hard pavement below.

I was unconscious for a while although no one remembers exactly how long.

I suffered a severe head trauma: Injury to the brain, head and neck which causes the seizures. They may develop immediately after your injury, or days, weeks, or even years later.

Mine developed quite quickly. When I first went to a neurologist he put electrodes all over my head and watched my brain waves. His eyes got wide and he exclaimed that I was having mini seizures about every two minutes!

Because it was 1956, the small-town doctor was called. He drove his big, clunky car over to the house with his black doctor's bag in hand, wearing his wire-rimmed glasses.

He sat by my bed for a couple of days until I gained consciousness. When I woke up he looked at my mother and said, “someone up there must really like you”, as he pointed to heaven!

I later found out that I had broken 6 cervical vertebrae, but hey, it was the 1950s and they didn’t even take me to the hospital. To this day, my neck still hurts!

My friends know that I have had epilepsy for my entire life, but many people are surprised that I can live the adventurous life that I do.

It's funny how people react. Some are totally accepting and supportive and others are frightened or think that I must be possessed!

It's interesting to see what kind of stigma comes with having a disability. I try to make it intriguing and challenging in a positive way.

I have found that most people are very supportive but there are a few that mock me and actually bully me for having this strange and awkward disease.

A woman actually said to me: “I hope that your head explodes and that you die!”

With any disease that has to do with your mental health, I know to stay away from the negative people and surround myself with joy and love as much as possible.

Epilepsy is a central nervous system (neurological) disorder in which brain activity becomes abnormal, causing seizures or periods of unusual behavior, sensations, and sometimes loss of awareness. Anyone can develop epilepsy.

The worst part about having epilepsy is not knowing when you might have the big seizure that kills you. A large percentage of people with epilepsy die from the disease.

But I rarely think about that and I live a pretty wonderful life. I have a Captain’s license, I'm a registered nurse, a midwife, a whale biologist, an artist, a free diver.

I race motorcycles, I’m a PhD candidate in Biology Conservation, and I refuse to give in to limiting my life adventures – much to my neurologist’s dismay.

There are triggers that cause a seizure:

· Not taking epilepsy medicine as prescribed.

When you have a seizure, very strange things happen to your body.

The symptoms you experience during a seizure will depend on the cause of your seizure and where it’s occurred in your brain.

I often have a premonition that a seizure is about to happen. I can experience anxiety, fear, nausea, dizziness, visual changes, auras, wavy lines, or spots in my field of vision. Sometimes I say, “I’m going down”, and my research team knows that I am about to lose consciousness.

Having seizures, especially if they affect your awareness or leave you feeling confused, can put you at risks of accidents, injuries and drowning. I take my meds! I don’t want to be on medication but it is something that I need to be responsible about.

I get very tired of taking them, but I don’t have a choice. I have tried taking noni juice, coconut oil, herbs, natural remedies, but unfortunately nothing worked.

I had so many seizures that a few years ago that they caused a brain bleed.

I had brain surgery to stop the bleed. It was terrifying to say the least. All went well and my grand mal seizures stopped.

It’s an ugly disease but I work hard to hide it. I sit on my hands when I start to get tremors, I leave the room and lay down on the floor when I feel a seizure coming on, and I prepare my students and interns on how to deal with a seizure.

I apologise to people for having the disease because it scares them. But I love my life, my work, my passion to study whales, my friends, my family …

I am grateful for everyday and I hope to be an inspiration to those who suffer from this difficult disease.