Nailing it in uncertain times 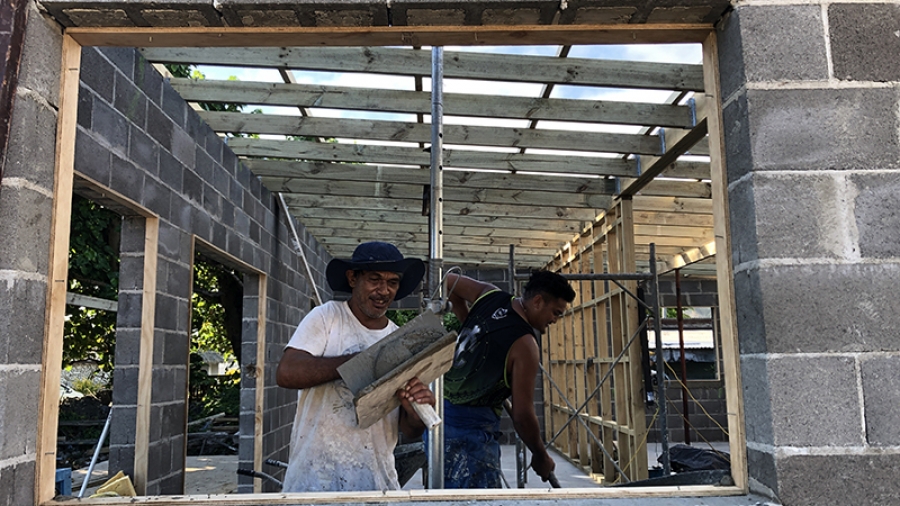 Workers laying down cement on a two-bedroom house under construction by builder Philip Hosking in Avarua. 20091121

A building boom in Rarotonga coincided with the rise of tourism leading up to the beginning of 2020. Since then, Covid-19 may have shut down the tourism industry, but the construction sector is showing some resilience. At least for now. Emmanuel Samoglou investigates.

With his face covered in a thin film of sweat, the Rarotonga-based builder, is mixing concrete to be used in a two-bedroom house he’s building in Avarua.

He says the project fell into his lap, after Covid-19 began dismantling the tourism-dependent economy.

Before the pandemic, roughly two-thirds of the NZ$540 million economy was dependent on travelers looking for a little paradise.

All of that changed earlier this year. Not only have tourism revenues plummeted, but earnings from fisheries – another top money maker for the government – have also taken a dive.

Jobs are scarce throughout the country.

With a building project on the go, Hosking says he considers himself one of the lucky ones.

Yet he’s apprehensive about what the future may hold, considering there’s no imminent signs of an economic recovery on the horizon.

“We’ll finish this one and see what comes after,” he says.

Before the pandemic, tourist arrivals had grown by 37 per cent over the past half-decade, coinciding with a building boom largely driven by the construction of holiday homes.

With a growing demand for beds, the construction sector reached a peak in 2017 with $37.3 million in approvals for residential, commercial, tourist, and community buildings, according to government statistics.

After a decrease in 2018 with the completion of several high profile community construction projects, including the Tereora College and Apii Nikao developments, approvals started to climb again with a 28 per cent increase in 2019 - again driven by a continuing building boom in residential and tourist accommodation.

And even in the era of Covid-19, the sector seems to be showing resilience.

Roadworks are underway throughout the island, along with shoreline protection work in Vaimaanga and the nearly completed $3.6m Avatiu bridge reconstruction project.

A brief look at the classifieds in Cook Islands News this week revealed where most of the job openings are.

While there may have been only six listings in the ‘situations vacant’ section on one particular day, half were for the construction sector.

Even without any major new projects, CITC general manager and company secretary Gaye Whitta says there’s still building going on around the island, with a noticeable uptick in home renovations and households carrying out minor do-it-yourself jobs.

“Building has been steady,” Whitta says.

But even the construction sector isn’t immune to challenges posed by the pandemic.

Whitta says meeting the needs of builders has been a challenge due to border restrictions imposed by governments.

When the pandemic was in full swing earlier this year, building supplies were designated as non-essential goods and certain orders had to be place on hold, she says.

When New Zealand came out of lockdown, domestic orders were filled before overseas orders, creating a backlog of certain items, including louver frames and glass, cable and plasterboard.

Pre-Covid, CITC would also airfreight goods ordered from New Zealand, but with a spike in air freight rates, they’ve switched to sea freight resulting in a time lag.

These days, one large project from a customer can have a big impact on stock levels, she says.

“If builders know they are going to be building, it’s best they come in to talk to the sales team or the manager so that we can ensure any large orders can be included into forward orders,” she says.

This week, John Short, the man up top at John Short Construction Ltd, instructed his men to remove the scaffolding on a nearly-finished two story office building in Nikao.

Under construction for well over half a year, he said the building’s tenants are ready to move in, allowing him to focus on a number of other projects currently on the go.

“It’s a tricky time, we’re careful, but we’re pushing it and we’ve been busy,” Short says. “Our workload hasn’t changed and demand hasn’t changed from before the virus.”

Like Short, most builders are cautious in their optimism during these uncertain times.

The government is continuing its push to invest in infrastructure, with its latest budget including a pledge to fund the construction of roads, bridges, and cyclone shelters.

And its Covid-19 Economic Response Plan also includes incentives to encourage businesses to make capital investments. However as many are cash-strapped, it remains to be seen how much building activity such policies will generate.

Meanwhile, builders and contractors hammer away, grateful for the certainty of a day’s work in these uncertain times.

“The virus hasn’t really affected us, but I would daresay that one day it will. I’m not stupid,” says Short.