‘My stretch marks make me who I am’ 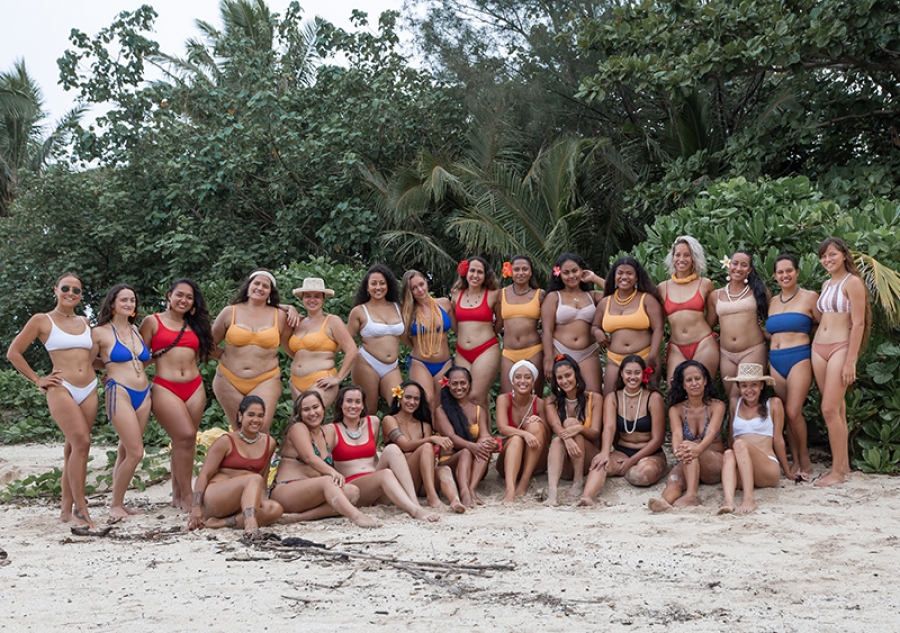 Women of all shapes and sizes, ages and different walks of life gathered together for the Body Positive campaign. TABBY BERG 20031205.

They were dismissed by some as just posing half-naked. But these 30 women who came together this week, irrespective of their age or size or shape, discovered a far richer truth: the importance of being confident in their own skin.

When Tajiya Sahay was in her late teens, she would never have considered wearing a bikini. She was 98kg, and miserable.

Today, at 27, she’s older and wiser and, yes, slimmer. Even now, it’s hard for her to show off her body – she worries what others will think.

But in December, she was crowned Miss World Oceania, sixth in the glamorous Miss World pageant in London, UK.

Waiting in the wings for a long time, ready to appear on stage in her cultural attire, she was apprehensive.

She felt insecure. She considered not showing her stomach because she was worried other contestants would notice the stretchmarks left by her weight loss.

“But it was all in my head, all the girls really cared about was when I would dance, and when I danced, they just cheered for me,” she says, with relief still showing through in her voice.

Attending Miss World, she realised the qualities they were looking for were hard-earned talents and brave personalities and big ideas – not small waists.

“Not holding back because of what other people think has just made me who I am and has brought so many opportunities into my life.”

With friends Maruia Willie and Tabitha Berg, Tajiya Sahay is promoting a body positive campaign for women of all shapes, ages and sizes.

To celebrate International Women’s Day, 30 women bonded together and bravely posed in bikinis to express appreciation for their bodies and to encourage other girls and women to accept and rejoice their physique.

Sahay says it took until just five years ago for her to garner courage to go out in a bikini.

“I finally got the confidence at the age of 22,” she says. “Now I look back and think, why did I torture myself?

“So, my friends and I really wanted to uplift women here, especially as it was International Women’s Day.”

She shared her stories of insecurity with the women – stories most women can empathise with.

“I’m normal, and like every other women, my stretch marks are here to stay, this is what my weight loss did and I’m proud of it.”

If she had continued to fret over her womanly streaks, cellulite or despairing comments from others, Sahay would not be in the position she is today.

“Stepping out of my comfort zone was the best thing I could have ever done, and now that I’m older and I’ve lived and learnt through stuff, my outlook is just… I can shrug negative comments off now.

“At the end of the day your body does so much for you, just be proud of your body.”

During the Miss Cook Islands pageant last year, Sahay says she was hurt by criticism, but strong enough to deal with it.

“People would whisper about me, look at her her, she’s got too many tattoos, she looks Indian, she was born and raised in Australia,” she recalls. “I just heard so much white noise.

“Lucky mentally I had overcome caring about people’s negative thoughts about me; but if I was 19 years old, I would’ve run and cried in my room and probably given up.”

“If that was when I was younger, that would have torn me apart.”

Of course, it is still hard to hear negative comments about yourself. Even the Women’s Day body positive project has prompted social media criticism.

Sahay was quick to respond publicly, thanking Horn for her concerns.

“My next campaign on this cause is within the schools, educating children on this issue,” she wrote. “I have done so in two outer islands and planning on a third later this month. At my own expense. As well as all the schools on Rarotonga.”

She added: “I'm so proud of these brave woman to stand up to society’s expectations, hopefully showing others to be comfortable in their skin, it’s a huge issue we all tackle.

Speaking today, she is delighted at the great reaction from women to the body positivity project.

“We might not be able to change everyone’s perspective but if we can make a small or big difference in a girl’s life, it’s worth it,” she says. “It’s about healthy minds as well.”

Joan Ceceilia Wong says she and other women have so many of the same insecurities – and it was this that pushed her to want to be a part of the shoot.

“I wear bikinis, but only for myself,” the 19-year-old says.

“But to see so many beautiful women of different sizes wear bikinis so confidently made me realise that if they could rock it so can I.”

Mother-of-five Anna Glassie agrees. This is first time in a long time she has actually finally secure and confident in her body, she explains.

“Our Cook Islands culture and my upbringing didn’t really allow me to do this; it was all about covering up and being modest.

“Also, I imagined what would my children think, given they are grown adults.”

Anna will only wear a bikini in front of close friends, “I don’t like showing my body still, it depends … being part of the group helped.”

Another woman, Purotu Puna, says the inspiration comes from the purpose of the project. “For me it was to show my generation that no matter your flaws, you should always accept your body and its imperfections.

“Also, it’s not about wearing the bikini to show what you have, but being able to wear your confidence with it.”

And when it comes down to it, a bikini is an item of clothing – so function comes ahead of form!

“I’ve always been able to wear bikinis at the beach despite my insecurities about my body,” Puna says. “I wear bikinis for comfort during my swim.”

Thirteen-year-old Mahana Sijp, the youngest in the campaign, turned up with her mother Suniella Tom.

The experience was a good one, Mahana says. “I was kind of shy to show my body to everyone, but when I got to meet everyone, I was so comfortable and was happy to be part of it.”

Tom, a mother of four, says the vibes were great on the day, “with surrounding love and positivity”.

Tom says she is a confident woman, but she knows it can be an awful struggle for other people to share their experiences or their lifestyle.

“I’ve learnt to just go with it, I’ve always been like that.

“I try to share my confidence to them, if it can help them build up themselves it’s good. It was really nice to see the women, it’s all about positivity.

“I felt it was a really good initiative for women who don’t really have the courage to really express themselves, a good way to invite all different women.

She is excited about the message they’re sending a younger generation. “My daughter said she hopes to have beautiful friends that can encourage and support each other.”

Sahay agrees; it’s about overturning taboos. “If we can change our generation, we can impact the next generation; something is better than nothing, even if one little thing will change.

“And the girls who were willing show their bravery and wear their bikinis? They’re over caring about what people think. Body positivity is to empower women.”

Just having the support of friends and other women, and learning to be comfortable and confident in her own skin, has done wonders for Sahay.

“I don’t want to be perfect all the time, I’m happy as I am.

“I really want to change some people’s views of how we talk to, or about, people.”

Sahay believes in reassuring women to embrace their lives. “It’s time to move past insecurities based on what other people will think of you, say about you or treat you.”

“If we all stand together and show people that we are comfortable in our own skin, with who we are and that we love our bodies, it will be wonderful.”