Mountain climb no easy feat but worth every step 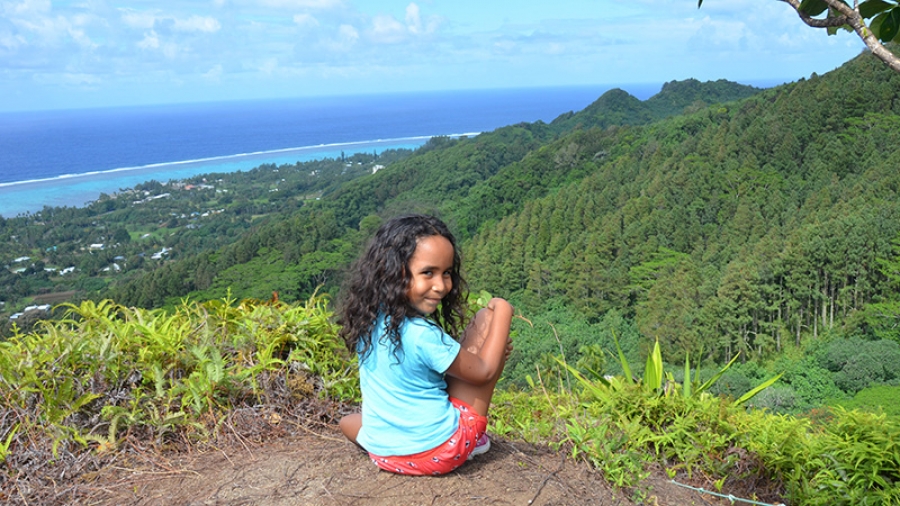 The hike up Arore mountain in Muri can be quite a walk and is not for the fainthearted. Cook Islands News journalist Losirene Lacanivalu rose to the challenge, and the reward was breath taking.

Climbing Arore mountain, how can you describe it? For Mable Elizabeth the whole experience was mind blowing.

“It gives you a sense of challenge not only physically but mentally as well,” she says.

I decided to throw myself in the deep end and joined Elizabeth and her family for a walk up the track on a Sunday morning.

As much as we thought the walk had already started from the road and up the steps, I had to take another deep breath as we actually reached the “start” of the mountain hike.

We laughed to ourselves, and said: “Okay, let’s get on with it”.

As we journeyed up the mountain, I recalled my last hike at the Needle a couple of years ago and I told myself: “Jeez that was easier, but maybe I was much slimmer than.”

For Arore, the track was clear, nothing in-between and we kept walking, holding onto ropes. I had to make stops in-between, it was either I was not ready for the walk, I needed more water or simply needed to push myself.

I had only reached the first “breath-taking view” spot. As I tried to catch my breath laying there, I told Elizabeth, I could not push myself any further. I was only a few metres away from the peak.

Elizabeth and her family hiked on; her six-year-old daughter Terry was so full of energy. And yes, a six-year-old beat me to it.

As I watched on from where I was and looked towards the horizon, I heard the family shout out, they had reached the top.

I walked back slowly and met a group along the way. They encouraged each other on their way up.

One particular young girl caught my eye. She cried out in frustration as she walked up, holding onto the ropes, but her friends kept pushing her by clapping and cheering her on.

Apart from the breath-taking views, and the lush and green surroundings, Arore mountain can be a great motivating tool, making you mentally prepared for the challenges in life.

“I must return,” I told myself.

The view is worth every step, says Elizabeth as they join me on my way down.

“I am especially so proud of my six-year-old daughter who made it up before me,” she says. It was definitely a day well spent.

As I headed home, mesmerised by the beauty of nature, I wondered about Arore and its origin.

According to Luther Zainey, Arore means “seeing victory – when you are up there, there is a 180-degree view left and right with a valley behind the mountain”.

Zainey is Pacific Resort’s head chef and the landowner who initiated the idea to get into a project that would provide a different experience for tourists.

According to the stories he heard, warriors would sit up on the mountain and watch for any war parties arriving and watch the valley behind them, protecting the village.

When he was first given the land, it was an impossible place to develop but he cleared it with his bare hands, using a bush knife and chainsaw.

It took him two years to clear the land. As he reached the first view spot, he was astonished with the sight and decided to continue to clear the bushes, extending the track further up.

“After that, I kept gaining distance, some parts were thick with bushes, I had to cut some trees and some were kept. It was full of every creep crawly you could think of, I did not stop, I could see I was nearly there.”

When Zainey reached the top, fern plants stood above his head and he had to clear them to get the spectacular view of the three motus and Muri, Ngatangiia.

He later bought 380 metres of ropes for the track to make the hike easier.

Zainey says the plan to make the hike commercial came about when he needed to generate money to get some basic infrastructure on the land.

And now he’s looking into getting basic infrastructure for the hiking site such as water, electricity, a proper driveway, planks on trees and plants and more signs along the hiking area, to give more information to hikers.

Arore Mountain Track was originally planned as a tourist attraction, a place where Zainey would be a tour guide for tourists showing them the natural surroundings of the mountain with stories and stops including sunrise tours.

But a week before opening, Covid hit.

If borders did not close Zainey would have gained enough income to continue the development on the land.

When the tourism industry crashed in Rarotonga, Zainey says he had to come up with a marketing strategy for the local people.

“The track was still fresh, it would close if people don’t use it,” he says.

Zainey told two of his friends to check the track out, they were amazed and spread the word.

“The last thing I want is to lose the track. My friends told people and as I worked up there, I saw people coming up. I saw it in the newspaper on the front-page photo, I told myself the idea works.”

Zainey says with zero tourists on the island because of the pandemic, it is a good time for Cook Islanders to get the local experience and support his venture.

If you don’t see Zainey at the mountain, call him on 79118. A bit of donation will keep the hiking infrastructure plans underway, $5 should do, he adds.