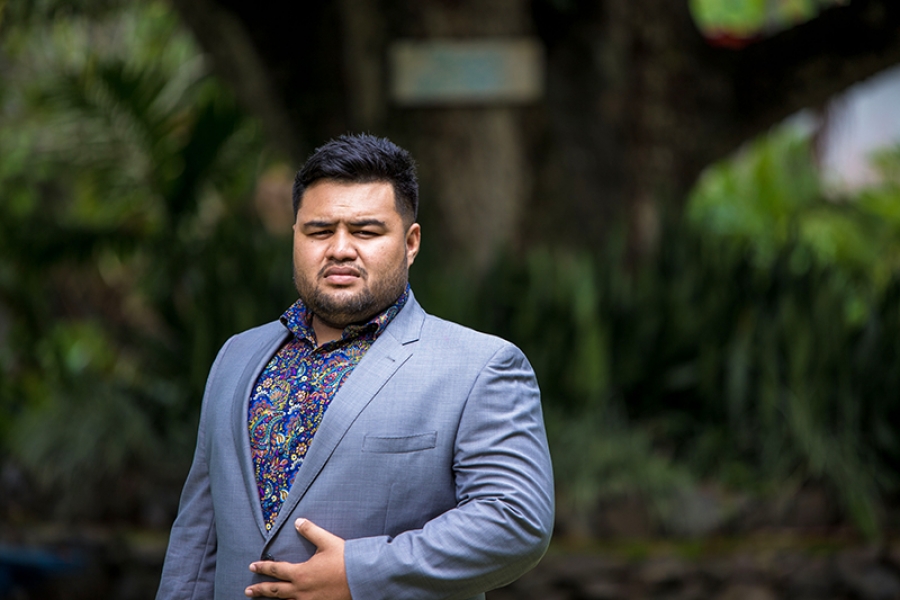 Ridge Ponini has dreams of one day becoming an international opera star. 18052502

Cook Islands opera singer Ridge Ponini recently auditioned for the prestigious Lexus Song Quest opera-singing competition in New Zealand. The Lexus Song Quest has been running for more than 60 years, and has been won in the past by such opera greats as Dame Malvina Major and Dame Kiri Te Kanawa. CINews recently caught up with 22-year-old Ridge – currently studying hard towards a Bachelor of Music degree in Classical Voice (Opera) at Otago University in Dunedin – to see how he went and to find out a bit more about this rising young singer.

How long have you been involved in singing?

I started singing at a very young age, mainly in church. I was always encouraged by my great-grandparents to sing at every function hosted by the church and so it just became a hobby. Later we formed a barbershop quartet group called The Boys of Harmony, also singing mainly at church functions. I first had a taste of singing opera in 2014, but didn’t think much of it really.

What was it like auditioning for the Lexus Song Quest?

The Lexus Song Quest is a prestigious competition which happens every two years. It was established to discover New Zealand’s new and upcoming opera stars. Singers all over New Zealand audition to secure one of only 10 spots in the semi-finals. I was auditioning for the first time and found it quite nerve-wracking. Unfortunately, I did not make it through to the semis. However, I was one of four entrants selected to participate in a masterclass with the head judge later in July. I thoroughly enjoyed myself – I can say it was definitely a big learning curve for me, but with all the feedback given by the preliminary judges it gave me hope and something I believe will help me with future competitions to come. It’s definitely not the end for me. I will re-enter the competition in 2020 and by then hopefully my skills and voice will have developed, making me ready and equipped to make it all the way.

What was your first professional gig as a singer?

My first-ever paid gig was when I was first discovered in Rarotonga and I was in the process of preparing for the University of Otago. Word got out, and I received a phone call from Anna Koteka to perform at her friend’s birthday party. With no experience other than that of singing in church, I took the offer and performed a few numbers alongside The Boys of Harmony. I really enjoyed myself – and better yet, I was getting paid for having fun and doing something I absolutely love.

What other jobs have you had?

While I was at Tereora College I was doing part-time work at Bounty Bookshop alongside my aunties, so quite lucky on my part. After finishing school, I worked as a licence officer at the police station for about a year and thereafter a receptionist for Pickering Motors for a few months. Right now I do casual work as a furniture mover, mainly over the university breaks.

How did you get started on the path to becoming an opera singer?

It all started at school at Tereora. One day a friend and I were singing casually, and we happened to pass my English teacher Brenda Rudolph’s classroom. She called us into the classroom instantly and to our surprise, as we thought we were in trouble, requested that we sing the song Hallelujah. After performing the song, she fell into tears and she said that we were both going to become international opera stars. We didn’t think much of it to be honest – we just thought that it would never happen. Fast forward, and Brenda Rudolph, without our knowledge, sent our video to various universities and luckily Otago University showed some interest and got in contact. They sent one of their professors, Judy Bellingham, (who to this day is still my professor), to give me a few lessons and check me out. She really stressed the idea that there was a place for me in Dunedin and that I had so much potential to become a Cook Islands opera star. It was at that moment I realised that I was going to pursue this career and that one day I could possibly be an opera singer. I stopped playing rugby and started taking piano lessons to be able to read music. I did this for a year under the tutorage of Papa Garth Young. Preparations within the year were in place to prepare me for auditions at Otago University and with the support of the community I was able to get myself over. I am proud to say that I secured a spot and so here I am now.

Are there others who helped mentor you along the way?

I think it was Brenda Rudolph and Glenda Tuaine who were my main mentors along the way, and up to this day they are still there for me and always supporting me. Their constant advice in what I do is what really pushes me to keep on, because I’m not only achieving this for myself but also for them and our Cook Islands nation. I have so much love and respect for them both.

Anyone else who inspires you?

My late great-grandparents are my biggest inspirations. I do what I do for them and to make them proud. The foundation that they built for me is the reason that I am who I am today, and I really want to make sure that I live up to what they have instilled in me. My idols in the opera world would be Pavarotti and Pene Pati from Sol3 Mio. I have some sort of personal attachment to Pene Pati – only because he is quite relatable, an island boy who went to normal school who did not do well or much in school, but has a natural and talented gift. It really inspires me to see that if you put your mind to something, no matter what walk of life you have come from, anything is possible and it gives me hope. Pavarotti is the kind of opera singer I wish to become. Enough said.

If you weren’t an opera singer, what might you have become instead?

Do you have any favourite songs to sing on stage? What are your career highlights?

I actually have two favourite pieces that I love to perform – first is O Sole Mio, which translates as ‘My Sunshine’, and the second is Tell My Father from The Civil War musical. Every part of my career and journey so far have been on a high – just absolutely loving it, loving life.

My go-to karaoke song is Super Bass by Nicki Minaj. Kidding! I think my go-to song is definitely The Prayer. A song I absolutely adore, and it holds some significant importance as it was my first ever opera song performed.

What’s the best thing about what you do?

There are so many great things about what I do, but if I had to pick one it would most definitely have to be the performance in itself. Opera is such a unique genre – you could say it’s a work of art. You get a sheet of music, study the music for a couple of months (if not years), then research the piece and its origin, its messages, its stories, etc. Once you have a grasp of the context, then the piece becomes relatable and you can establish an intimate connection. The finale is performing that piece to an audience who probably does not know anything about the song, but you sing it like it’s your own story to tell, like you’re telling the audience a story about your life. The response and reactions you get back once they’ve made a connection always keep me in awe. It’s amazing how a song can connect you to someone you do not know.

And the hardest thing?

The hardest thing about my career is learning the music. With no music background at all, like learning or reading notes, understanding music sheets etc, was a challenge for me at the start. I can say I have come so far though – I’m quite proud of my understanding now and my achievements over the years. It’s definitely gotten much easier, but it can still be a challenge, especially if the piece is in another language. But it all comes with practice.

Any advice for other aspiring opera singers?

What are you up to over the coming months?

July is going to be a busy month for me. I have been selected to do a masterclass with Sir David Jones, which also includes a private one-on-one lesson with him in Auckland. The masterclass for the Lexus Song Quest falls in that same month as well. I’m also currently taking part in a chorus for the opera Don Giovanni, which will be showcased in August. And I will be competing in upcoming opera competitions, so will keep everyone updated with that. Lastly, I am the president of the Cook Islands Student Association here in Dunedin and we are working hard with many fundraisers to attend the annual student conference, Taokotaianga (TAK), to establish networking amongst Cook Islands tertiary students.

I hope to return home and hold workshops for students to give them a grasp of what it’s like to be out there chasing your dreams and an understanding of the world of opera. I would just like to thank my Ponini family, the people of the Cook Islands, and everyone who’s helped me get where I am today. May God bless you – I appreciate and love you all.