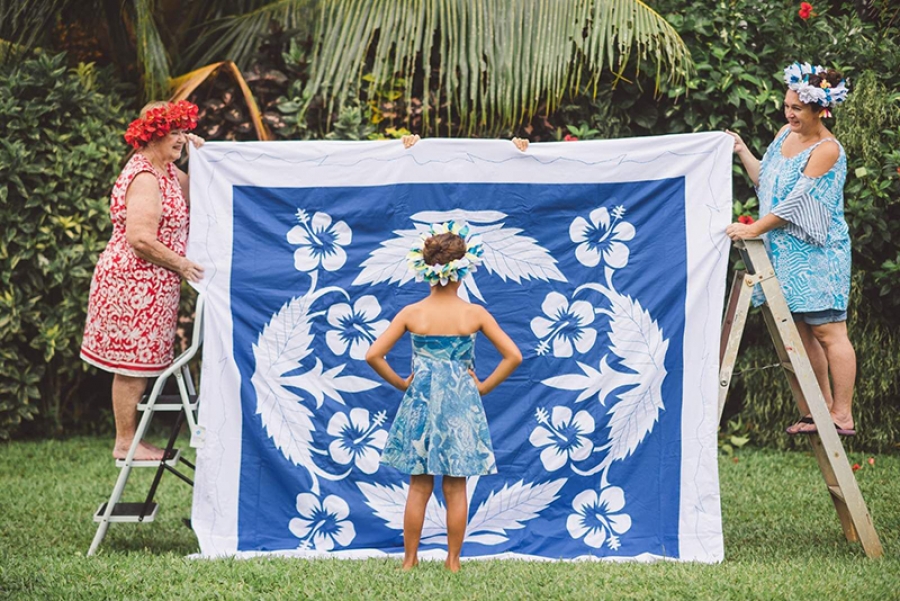 Tivaevae Collectables began when Anne Reid started selling their wares at Punanga Nui Market. With daughter Kathrine's input it's since grown into a successful business, keeping the tradition of tivaevae alive. 20061902.

In order to succeed in business, you have to think outside the square. Katrina Tanirau discovers how the Covid-19 pandemic has forced Ann and Kathrine Reid to adopt new ways of selling their tivaevae.

Sitting down with a group of like-minded women, sewing while creating something beautiful together and sharing stories.

That’s why Anne Reid decided to embark on a business journey showcasing the art form of tivaevae in 2005.

Daughter Kathrine moved back to Rarotonga two years ago, with the intention to inject some fresh ideas into the business.

You’d be hard pressed to find a house on Rarotonga that doesn’t have some form of tivaevae in it. And in fact, it’s an art form mastered by generations of women around the Pacific Islands.

Tivaevae (also spelled tivaivai) is the Polynesian practice of communally making patchwork quilt. There is no written record on how and when the sewing of tivaevae was introduced to the women of Cook Islands.

Some say it was the wives of the London Missionary Society missionaries who arrived in 1821; others believe it was the three Catholic nuns (one Irish, two French) who came from Tahiti in 1895 and taught sewing at the local Catholic school.

Regardless, tivaevae is an art form her grandma used to love and enjoy, Kathrine says, and her and her mum Anne’s passion is to keep tivaevae alive and carry on the tradition.

“Mum and I came back to the island and fell in love with it,” she says.

Fifteen years ago, Anne Reid started out by selling their wares at Punanga Nui Market, but after a few years and with demand for their top quality items including cushion covers, table runners and bed linen sky rocketing, they branched out and opened a showroom.

A lot of the resorts and accommodation providers on Rarotonga get their linen from Tivaevae Collectables. The quality is so good, it’s usually about 10 years before they need to be replaced.

That’s not so great as far as profits go, but it speaks volumes as far as quality goes, Anne says.

It’s not only linen and clothing that Tivaevae Collectables specialises in; they stock rito earrings and hats which are also hugely popular overseas.

Local young artist Kaia Dearlove also has a stand of individually painted cards, which they market.

As for any other business, coronavirus has made thinking outside the square essential, Kathrine says. They have shifted their focus to their online business.

“It’s been good to be able to have the time to do that,” Kathrine says optimistically.

They’ve amped up their online presence on social media, where local mamas give live tutorials on sewing button holes and other traditional tivaevae practices.

But their newest and most exciting venture is a glossy catalogue full of furniture suitable for modern island living and it’s a hit among accommodation owners on Rarotonga.

Kathrine believes so strongly in the furniture line they are shipping in, that she has decked out the house she is building in Ruatonga.

She has no qualms about revealing that their business is largely powered by women.

About 10 local women, including two mamas from Palmerston and Aitutaki, contribute as suppliers to the business.

“We have a lot of suppliers who feed into our business, for example we have 15 sewers in Indonesia all of whom are women. Most of them have been able to purchase their own sewing machines so that excites us, helping women get ahead in the world,” Kathrine says.

“I’m proud of the fact that we are extremely pro-women. After I had my son it made me realise the part women play in every aspect of life from taking care of things at home to being able to run businesses.”