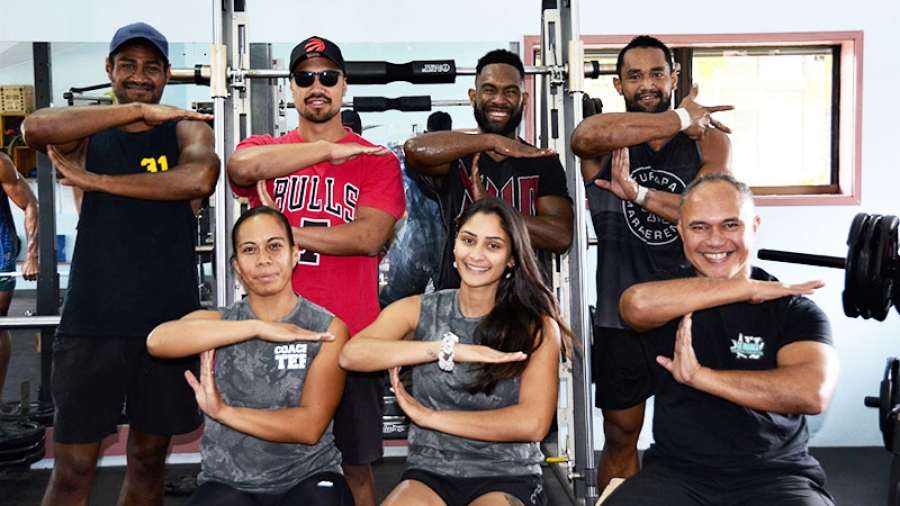 There’s no special secret to the phenomenal success of the Johnson’s health and fitness challenges. It’s just about supporting each other.

When Roimata Peraua returned from New Zealand earlier this year, a workmate at Cook Islands Police Service didn’t recognise him.

Peraua had piled on the weight over there; he was tipping the scales at a hefty 130kg.

“He couldn’t quite believe it was me,” the police officer recalls.

The workmate remarked tactfully about his rather bigger appearance. “After a talk he convinced me to take on Johnson’s, so I did.”

Johnson’s? You may have heard the cryptic term. After all, a record 150 locals registered for the latest Johnson’s challenge, eight weeks ago. Some of them are your family, your friends, your workmates.

Last week, the popular Johnson’s Transformer challenge wrapped up its third eight-week run, its most successful yet.

It started back in 2012 or 2013; a group of close friends who were top-grade sports players, heading into retirement but determined to keep active, fit and healthy.

The six friends began exercising together at 1pm every day, doing circuit-style workouts led by Tere Strickland. Eventually word got out and more and more people started turning up.

Their wives also jumped on board, and friends and family members.

By 2016, the 1pm classes had become an absolute hit. They were rebranded “Johnson’s” by the Tupapa Maraerenga community Gym and Fitness Centre.

“Johnson” is the nickname of The Don himself, Tere Strickland, the lead instructor.

We worked hard to get to the bottom of this. Johnson is his old nickname from rugby days. Tere’s middle name is “Don”

And there was a well-known Australian rugby league player called “Johnson”. Then there was “Don Johnson”, of course, from 1980s American TV show Miami Vice.

At the request of die-hard members, the fitness centre held its first ever Johnson’s Challenge in 2018. Since then, the programme has grown rapidly to include five extra sessions per day and six additional trainers.

They all have their own names: 5.15am Insane, 12pm TOA Beast camp, 12pm Triple Threat, 1pm Extreme and 5pm Move with Jay and Shan; there is also an intense 4.15am session for the bold and daring.

Insane. That was how it must have felt. It was dark and cold when Peraua turned up to his first class in the Tupapa gym’s Transformer challenge, at 5.15am.

After that first early morning class, the police officer admits he couldn’t walk. “It was really hard and tough but I carried on.”

His biggest challenges were those early morning rises – and sticking to the meal plans.

Used to eating large portions and whatever he liked, Peraua drastically cut down on rice, bread, red meat, alcohol and ate more green vegetables, chicken and fish, and slowly introduced the new eating patterns at home to his wife Uriau and their five children.

“At the start it was difficult to maintain, after two weeks it became much easier, you just follow the meal plans.” He kept daily records.

Peraua credits his gym buddy Nooroa Ngametua for keeping him on track. “He would pick me up every morning and get me to class, so I couldn’t make any excuses. I couldn’t say no, I had to go.”

He recommends first-timers team up with a friend, like he did, “someone who will support and push you to keep going and keep you committed”.

Today he is more active and has much more energy, “mentally and physically”.

At last week’s end-of-challenge prizegiving, the name Roimata Peraua was read out. “I couldn’t believe it!”

He had won the challenge for the Insane class, losing 15kg in eight weeks.

Angeline Noema felt very shy when she started the classes, because of her large size.

She weighed in at 113kg. She had reached a point where, “I felt my health was not the best and my unhealthy eating habits contributed to this.”

Her Aunty Tahiti Isaaka “pushed me to join and signed me up”.

But her fears were allayed. “Everyone was so nice to me, friendly and encouraging so I felt okay.

Eight weeks on, she lost 16kg – she has now dropped below the market of 100kg and stands at 97kg. “This was one the best experiences of my life,” she says.

Food and the commitment to the meal plans was her biggest challenge. “The hardest thing I had to give up was kinaki.”

She also had great support from her partner Joshua Koroi. “It was also hard for him getting used to the smaller meals, but we managed to minimise our portions, the size of our plates and even the size of our pots.”

“Before we used to cook in such large pots with lots of food – it was the more food the better, but not anymore.

“Although at times the food doesn’t feel like it’s enough, I just think of training the next day and I don’t want to suffer because of over-eating.”

Noema also chose the 5.15am session, working shift hours to fit around her training.

At the prizegiving, Noema claimed the Wellness Award. “This transformation has boosted my self-esteem and confidence,” she says.

Strickland says they don’t offer anything particularly unusual. “But it warms our hearts when our Johnson’s community keep coming back for more – they are our purpose.”

“It’s not just an addiction for the burn of each class, but for the vibe and the environment. Most people come back for the vibe.”

“People are constantly meeting new people, making new friendships and developing networks from different social circles – while working towards a healthier lifestyle for themselves.

“We have regulars who attend religiously, and we also have new faces join us every day, to each class.”

With five classes there are options to find a class that suits you best, and the challenges are very affordable. Strickland is passionate about letting people make healthy lifestyle changes for themselves, by moving more and developing better eating habits.

At the end of each eight-week challenge? “The highlight for us trainers is seeing the glow in our people's faces at the end of the challenge – the glow that comes with knowing that you are physically and, most importantly, mentally fitter and stronger that you were before; the realisation that your body is absolutely incredible.”

· Johnsons will kick off their fourth eight-week challenge on August 24.