‘I will always stand up for what I think is right’ 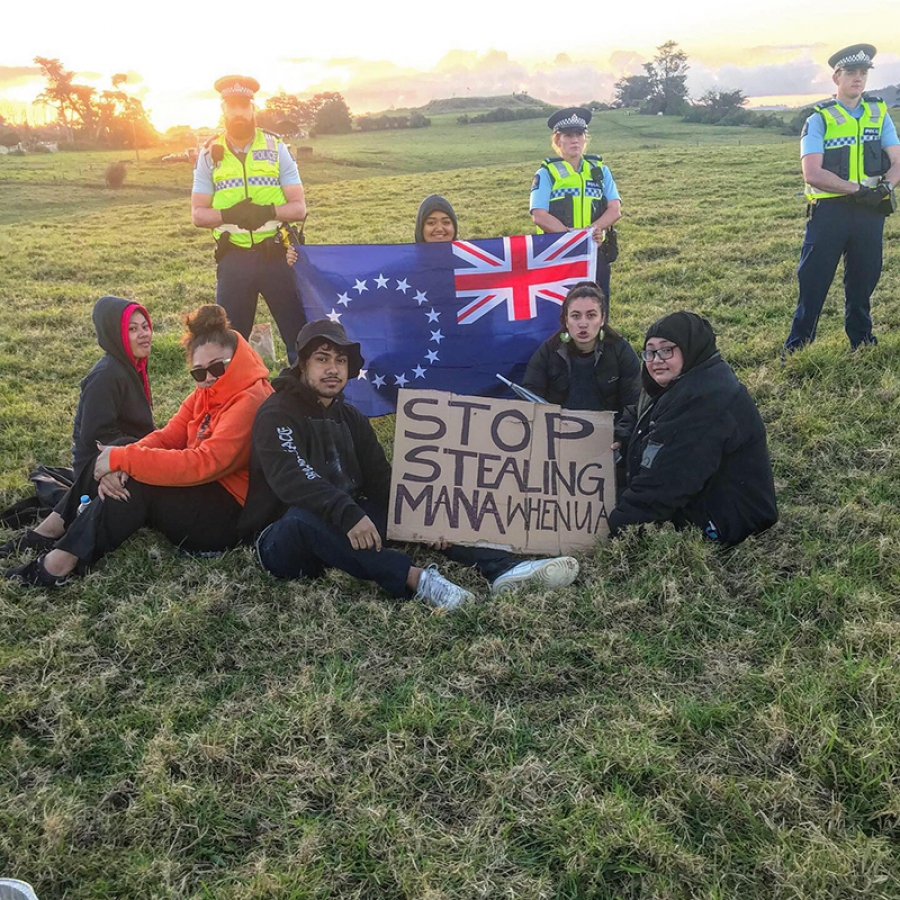 Cook Islanders Elsie Hosking and Hareta Tiraa-Passfield are among the increasing numbers of Maori and their supporters occupying the ancestral land. 19072524

The green coastline of Ihumatao was settled nearly a millennia ago by Polynesian voyagers who pulled up their vaka and set up gardens on the edge of the Auckland’s Manukau Harbour. The area has been continually occupied by their descendants ever since.

Today, the land is scattered with stones that once made up the great walls around ancient garden plots. Lava caves with the remains of ancestors hide beneath the surface. From the outside, the green expanse is one of the few tranquil open spaces left in Auckland city. On the inside, it's a site of heated dispute.

Cook Islanders have joined hundreds of other protesters at Ihumatao in Auckland, New Zealand, who have occupied the site in a fight against the proposed development of the land by Fletcher Construction.

“It’s just crazy that we indigenous people do not have the right to look after our land and keep our land, its modern-day colonialism,” says Elsie Hosking, a resident of Rarotonga.

The land was first taken from local Maori by the New Zealand government in 1863, as punishment for their support of the Kingitanga movement. It ended up in private ownership and was run mostly as a farm until 2012, when the Environment Court found it could be rezoned to within city limits and be marked for “future development”. Despite an attempt by the council to purchase the land, multinational Fletcher Construction bought it.

Enter Pania Newton, a descendant of Ihumatao. She has been integral in helping to establish Save Our Unique Landscape (Soul Ihumatao), the group at the forefront of the struggle. They have occupied the land, gathered support, held events, and educated as many as possible about their cause.

In 2017, Newton and co-campaigner Delwyn Roberts took their cause to the international stage, appearing at the United Nations in New York to present their case. It has been nine years since New Zealand adopted the United Nations Declaration on the Rights of Indigenous People, and the pair were there to remind the New Zealand government of their obligations, albeit moral and not legal.

For the past four years, Soul has been resisting Fletcher's plans to convert an area of the heritage land into 500 high-density houses. They are not opposed to Special Housing Areas, admitting there is a need for more housing in Auckland. However, they say that the community does not want or need housing on top of sacred places.

Early Tuesday morning – the day construction was due to begin – a dozen or so occupiers were awakened by more than 50 police officers, who had come to serve them with a notice to vacate the land. The protestors did so peacefully, but soon put out a call to the wider public for support. Within hours, hundreds of people gathered at Ihumatao in a display of solidarity with the Soul group.

Among those who have made the journey are Elsie Hosking and Hareta Tiraa-Passfield, both residents of Rarotonga currently completing their tertiary studies at the University of Auckland. The pair say they are supporting the movement because they see similarities between the issues at Ihumatao and issues here in Rarotonga.

“I think a lot of similar issues are happening back home in terms of land being sold to Pakeha or being leased by Pakeha people,” says Tiraa-Passfield.

“I also think the government not listening to people is something that is also quite prevalent in the Cook Islands, for example purse seine fishing, deep sea mining, land rights and things like that,” she adds.

Hosking was at the forefront of a petition established to prevent the development of land at Vaerota Marae, in Avana. The site is recognised for the sacred relationship it shares in connection to the first vaka that passed through the Cook Islands, the koiti taukura (fiddler crabs), as well as the moi fish that are native to the area.

“I was responsible for the petition for Vaerota last year and it (Ihumatao) is the same kind of situation – we don’t want development on that land,” says Hosking.

The 20-year-old arrived at Ihumatao shortly after midday Tuesday, and settled down for the long run as the clock ticked towards midnight.

“When we first got there, it was a hostile environment because there were so many police officers there,” she said. “All of Wednesday, we sat in the paddock. Everybody that was sitting in the paddock had to write down a lawyer’s number just in case we were arrested.

“It was pretty scary at first … They (the police) have been really hostile to the hospitality shown from the people down there,” Hosking says.

Today marks the fifth day since the notice was served to the protestors and there are no signs of either side backing down anytime soon. Although it has been a peaceful resistance so far, there are fears that it may escalate given the sheer number of people that continue to join the movement.

“No-one wants it to escalate any further. They want it to be amicable. They want 100 per cent of the land to be returned. I think a lot of people hope for that, but I don’t necessarily think that’s what’s going to happen,” Tiraa-Passfield says.

The pair say that they are prepared to do whatever it takes to ensure that the land is returned in full to the local iwi.

“If I did get arrested, I would be completely fine with that, because I love this cause and I would do anything for it,” says Hosking.

Tiraa-Passfield agrees: “I will always stand up for what I think is right and if I have to suffer the consequences of those actions, then I will deal with them. Being arrested is not something I’d hope for, but it’s something that I am willing to risk.

“I’m really hoping the government step up and step in. From what I’ve read, they say it’s a private issue when it’s really not, especially when the government stole the land in the first place. It really is their issue as well. If it’s the people’s issue, it should be the government’s issue.”