Homeward to the unknown 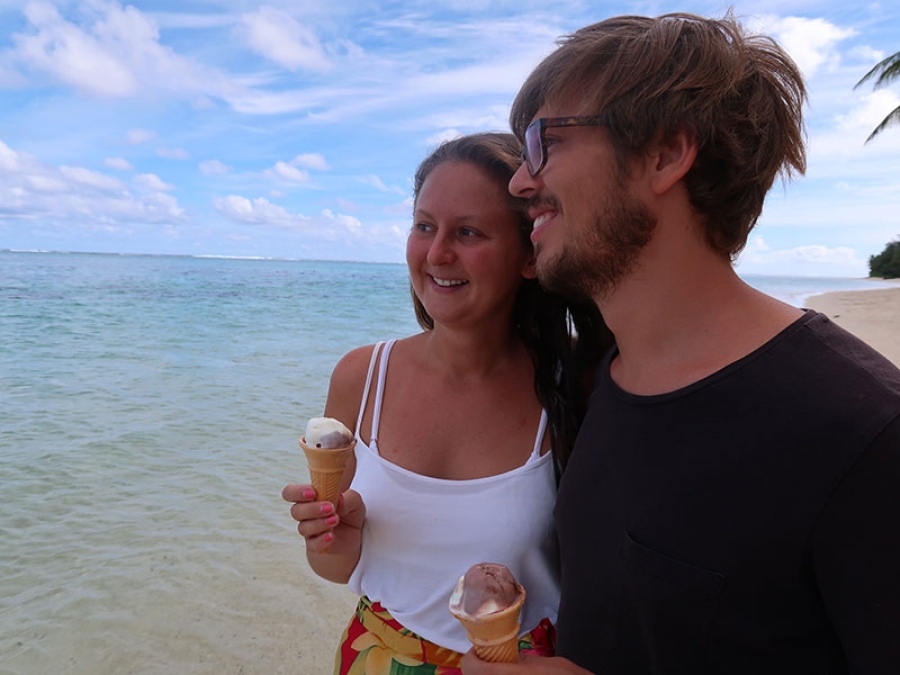 Karin Skaal and Sebastian Tarrach have come to love Raro; now they are preparing for the long trip home to Sweden. 20041509

The Government of Germany plans to fly up to 40 stranded European tourists home from Cook Islands on an Air New Zealand charter flight this weekend.

When we first met Swedish couple Karin Skaal and Sebastian Tarrach at Rarotonga Airport, they were scared of what the future might hold.

They had just flown back from a blissful holiday in Aitutaki, only to discover they wouldn’t be allowed to board their flight back to Auckland, and then home to Sweden. Karin was tearful. It was, they say, the low point of their travels.

“All our plans were crashing down, everything was disappearing,” says Sebastian, 27.

But that was nearly a month ago. They have spent the weeks since then making the best of an unplanned stay in Rarotonga – and thanks to the hospitality of locals, these have been the best of times.

There could have been no better place to be stranded, they say.

“We got help from all the locals,” says Karin, 28. “We will remember that the rest of our lives.”

Now, they are preparing to board an Air New Zealand charter flight scheduled to leave Rarotonga on Saturday, bound for Sydney. Their concern now is about the threat of coronavirus on the trip home and in Europe.

There have been 12,000 Covid-19 cases in Sweden; 1203 people have died. “There have been more and more deaths of elderly people,” says Sebastian. “We are worried but we are not scared.”

Karin explains they live in a country area, where there is less coronavirus than in the city: “We’ll feel safer when we get home.”

The German Government is chartering a special flight, NZ 1961. Three Air New Zealand pilots and 10 cabin crew will fly the Boeing 787-9 Dreamliner from Auckland to Rarotonga; the crew will remain on the plane as the European passengers board.

“Of course, we will also adhere to any additional health requirements set down by the Cook Islands Government.

“Air New Zealand is strictly following New Zealand Ministry of Health guidelines to keep its customers and crew safe, including the Ministry’s advice on self-isolation and appropriate PPE use.”

The chartered Dreamliner will fly to Sydney, where the passengers will transfer to another chartered flight, Qatar Airway’s QR 909 to Doha, and then to Frankfurt in Germany.

For passengers like Karin and Sebastian, or Swiss couple Giuseppe and Susanna Martegani, they must then book flights of their own to their home countries. All told, it will take the Swedes more than three days to get back to their hometown of Gothenburg.

When they get there, they will go into two weeks isolation in a rented apartment, before they can see their families.

The Marteganis are ready to return to Switzerland. Giuseppe, 74, and Susanna, 77, say home is where the heart is. “It is time we go.”

The couple have been in Rarotonga for more than a month, unable to leave.

They are excited about the chartered flight – but also keeping their fingers crossed and praying they can find a transit flight from Frankfurt to Zurich. For sports betting you will need an app. 22bet app have many sports lines and markets .

Susanna said they would visit the Air New Zealand office today to check on flight details, in the hope of travelling on Saturday.

There had been many changes to flights and border rules every day, she said. They have been keeping up with the news and hopefully this time, she and other Swiss families who are also in Rarotonga will make it across.

The 40-or-so Europeans leaving on Saturday are some of the last tourists left in Cook Islands. They leave with warm memories.

Karin and Sebastian say it started with assistance from Cook Islands News and Vodafone staff at Rarotonga Airport. Then Peter Heays and Jolene Bosanquet gave them a cottage to stay in, in Titikaveka.

There were amazing adventures, like when Josh Utanga and his team at Snorkel Cook Islands took them swimming with the turtles. “It was exciting and unique,” Karin says. “We’ve only seen that in pictures, before.”

Or preparing and laying an umu with a local family, before being taken on a tour of the island on the back of the pickup, while it cooked. “I haven’t tasted such good chicken before,” she remembers. “That was a day we’ll never forget.”

Sebastian says it was initially daunting to find themselves stranded in Rarotonga, knowing nobody, with nowhere to stay, and little money – but the generosity of locals has blown them away. “What has happened to us has strengthened us.”