Home with his ‘Garden of Eden’ 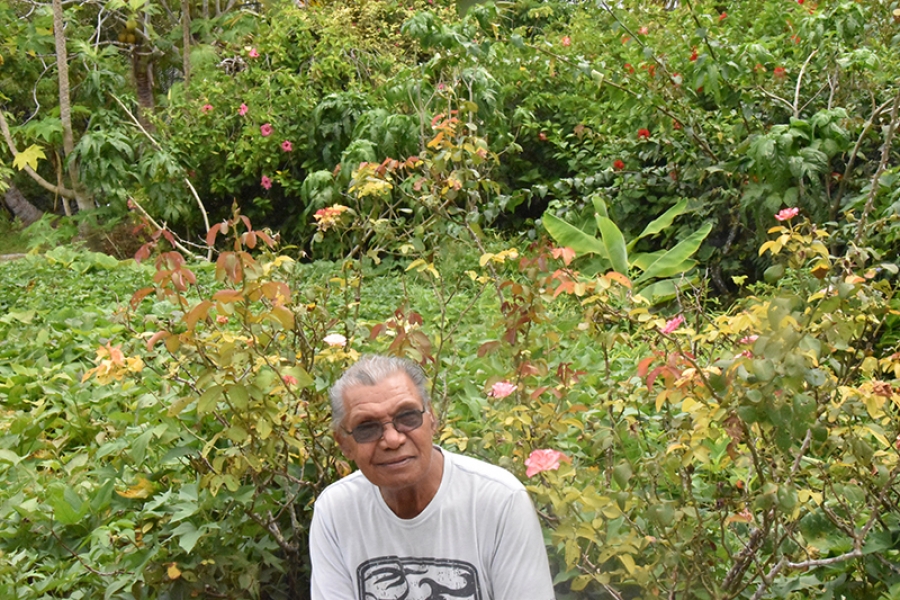 After 45 years in New Zealand, Teremoana Tutini fondly known as Papa Neke returned to his island of birth Mitiaro in 1999 with just his bags and a tent. Now 82, he has two houses and a self-sufficient garden locally known as the Garden of Eden. He is at peace, and loves the simple quietness of life. Melina Etches finds out more during her recent visit to the island.

Arriving at 82-year-old Teremoana Tutini’s home you are greeted by a sturdy looking gate and a landscaped lush garden, that locals call “The Garden of Eden”.

Along with the impressive wall of toka makatea (fossilised coral rocks) that surround half the property, the gate serves an important purpose – to keep out the wild pigs.

Papa Neke, as he is affectionately known, was born on the island of Mitiaro in 1937 to Tama Tetava and mother Vavia Tutini. He was named and brought up by his maternal grandparents.

The name “Neke” meaning move, is a nickname given to him as a child.

He explains: “When I was a kid, I was always smart and cheeky with the other kids, they would chase me but couldn’t catch me … so they called me Neke and it stuck.”

When Tutini was 13, his grandmother Maeu O Te Rangi took him to Rarotonga where he lived with Don and Mii O’Brian - Ariki Vaine o Teakatauira.

Wanting to explore more, Tutini moved to Atiu for three years before returning to Rarotonga staying with an aunt Metuavaine Moreland until 1959.

Yearning to experience more, he made the decision to venture out to the wider world and see what else was out there.

Like most of the Cook Islanders at that time, his first job was at the freezing works.

In 1961, met his wife Melody Tonkin, together they raised six children (four boys and two girls).

Working in an environment where everyone spoke English was good.

“That’s where I learnt to speak English, by listening and practicing my words,” and being married to a papa’a woman was a great help, he adds.

Determined to better himself in communication, Tutini also taught himself to write by copying peoples writing. He persevered achieving his goal and is bilingual in Maori and English.

After many years away in New Zealand, a brief two week visit back to his home island in 1990, steered the course of the rest of his life.

Going back to the island back then was a moving and emotional experience.

“My heart cried out to me, calling me, come back, come home. I felt so peaceful here.”

Returning to his family in New Zealand, Tutini said to his wife Melody, “I just want to go home … my heart is crying to go home.”

She was understanding and supportive of his wishes.

He had also wanted to establish something for their kids and grandchildren on the island.

Still homesick for the serenity of his place of birth, nine years later he returned to Mitiaro on his own for good.

Tutini’s first priority was to build a shelter structure, “a roof over my head”.

He approached the Mitiaro Youth Club for help, they agreed and set about building walls from au sticks and a kikau roof. Within three days, the structure was completed and he had a roof over his head.

Tutini then worked on a fence of toka makatea (coral rocks) to keep the wild animals away so he could plant.

Tutini has nurtured his garden lovingly for over 20 years.

The intense labour he has put into his garden is impressive. Fruit trees, vegetables, roses, plants, and root crops from taro, yams, kumara and maniota are tidily spread out on his land, with coconut husks put through a mulcher used as compost.

Tutini lives on his produce and most mornings he has maniota for breakfast.

Later he started building a second house by himself, “because the kids were coming to visit”. Bit by bit he laboured on, it took nearly two years to complete.

Planting has always been part of his life, “I love creating things in my garden, watching it grow, it’s very rewarding.”

Tutini never attended school and like many children at that time, he helped out in the plantations and feeding livestock.

It’s easy to see why Tutini is relaxed and comfortable. On the island, it’s like time just stands still; you are part of the tranquility and you don’t want to spoil it.

I ask him if he gets bored or lonely.

He laughs, “I’m not, I’m good and I’m happy. I travel twice a year to see my wife, kids and grandchildren, or they visit me and I have my garden, reef fishing, church…”

As pastor of the Assembly of God Church, last October he travelled to Israel for the first time.

He felt blessed, “it was awesome, an eye opener for me, it’s everything I read in the Bible, it’s all true.”

At present Tutini is learning to use a mobile phone.

His landline service was unfortunately accidently cut off when Te Mato Vai project came along, he tells me, and with the television station out of action, he does miss the world news.

“If I’m really stuck and need help with communication, I go and see Chris Story,” he adds.

I ask what changes he has noticed.

“Te peu enua, te matutu nei i konei (the island traditions are still strong), it’s our way of living and we respect each other,” he says.

Saying goodbye to Tutini, we meander again through his wonderful tropical garden.

“Home is where my heart is,” he says.