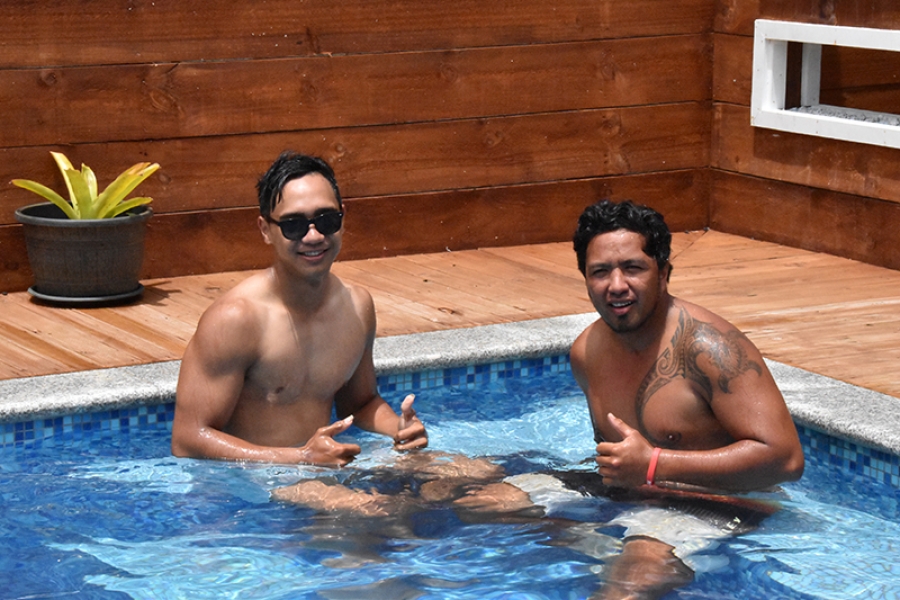 Joshua Matakino (right) at the Mai'i Restaurant and Bar in Muri where he works as a lifeguard. 19120601

Joshua Matakino still carries the scars of the drunken bike accident that nearly killed him. Now, given a second chance, he’s grasping life with new vigour and determination. Losirene Lacanivalu meets him.

It was 10 years ago that Joshua Junior Matakino, drunk, made the fateful decision to get on his motorbike and turn the key in the ignition.

Riding through Avarua Town, he crashed – an enormous accident that nearly killed him.

Now 29, Matakino looks back at his 19-year-old self and says – like many other young men – he was not serious about life. He was too arrogant.

But that bike accident had one positive outcome. It helped him realise the importance of life, family and culture.

He regained consciousness at Middlemore Hospital in Auckland, certain in the knowledge that God had given him a second chance.

Showing the palm of his hand, he illustrates the size of the severe wound he had on half his face and to half of his skull.

Without wanting to reveal more of this, Matakino says he didn’t take anything seriously back then.

Matakino was raised the oldest of four boys grew up in Ruatoga, Rarotonga.

Growing up, he says, his dad was hard on him. It was only after the accident he realised how much his dad Vainekiki and mum Ruta loved him. How important their prayers were.

“From the accident, I decided I need to know what's important, need to weigh out what's valuable and I needed to live life with a meaning.”

And as a teenager, Matakino says he hadn’t been much interested in trying new things like other boys were. But he had learned one skill that would anchor him after the accident: he was a cultural dancer.

Like everything else in his life, of course, he didn't really take it seriously.

But after the accident he woke up with the ambition to get back into dancing and to ensure he performs with passion.

It was that dream of dancing, that rhythm in his heart, that slowly brought sensation back to his feet.

“When I woke up from coma I was happy,” he explains. “I would move my feet when I heard music, I started dancing again, I just reacted to music beats.”

Matakino said since then, he had dance groups including the well-known Akirata, performing every week at different hotels and resorts.

“I love dancing, it keeps me motivated, keeps me fit and I want to be a good performer and dancer.”

Ensuring the richness of Cook Islands cultural dance is being practiced, protected and shared, Matakino believes one should first learn the richness of your own culture – before going out to the world.

One of his best experiences as a dancer with Akirata was performing onboard a cruise ship.

It was exciting, trying to both dance and to keep their balance on the ship!

Now he is looking forward to taking the next step in his dancing career. He loves the American dance movie Step Up 1, 2, 3 – and this has given him some hip hop move ideas.

Matakino works as a lifeguard for Mai’i Restaurant and Bar, to pay the way to allow him to dance every week with Akirata. Monday and Tuesday at the Islander Hotel, Wednesday at Muri Beach Club, Thursday and Fridays at Crown Beach. On Saturday they perform a main show at the Edgewater, or they perform at a wedding or birthday.

For a man who was once lying motionless in a coma, it seems his feet never now stop moving.

And Matakino wakes up each morning thanking God for another day.

“Since the accident I learnt that when a door is opened, don’t take things for granted – life is too precious to lose.”

He tells his friends and families who are out drinking to pause, before they get on their bike or in their car. Indeed, to listen to themselves even before making a decision to lift a glass or bottle.

“I did not think before the accident. Now I ask people to think.”

So what’s next? Well, he hopes to learn the Cuban dance, the salsa. It will help him build confidence – and for him, the salsa is about passion, about love.

And in the salsa, your feet never stop moving ...