Fisheries industry: Hooking the big one 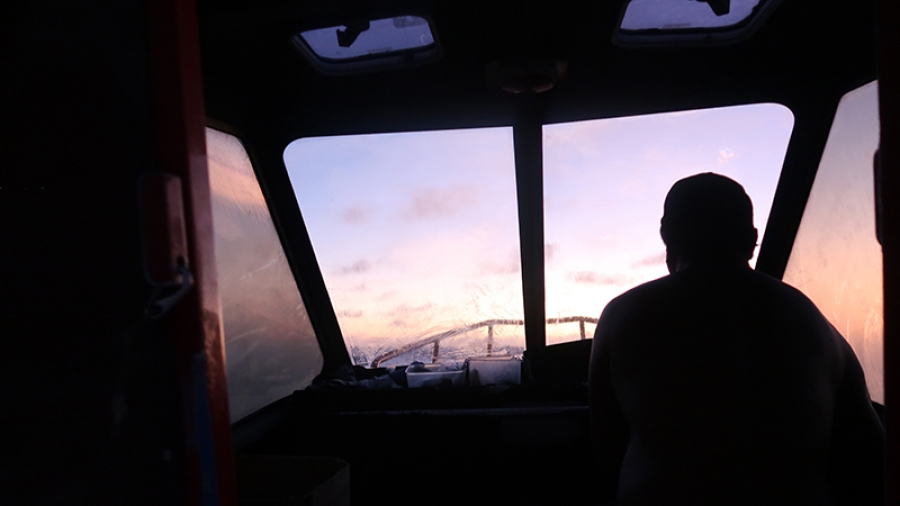 First thing in the morning, Steven Kavana – or Captain Moko, as the tourist know him – is steering his boat out from Avana Harbour. JONATHAN MILNE 20042331

Local fishermen are struggling to make a buck with the tourists gone – but it is large-scale fisheries that could yet help the country get back on its feet again.

Cook Islands’ fisheries haven’t had the opportunity to realise their full multimillion dollar potential. Until now.

With coronavirus bringing tourism to a standstill, the focus has shifted to other industries to offset major loss of income from the service business.

Industries like fisheries and finance are deemed important but their contribution to the local economy have been low, compared to tourism which represents about three-quarter of Cook Islands gross domestic product.

Now economists say the country should revisit its revenue strategy for other industries such as the fisheries sector, to provide some relief to its ailing economy.

In its latest Pacific Economic Monitor report, the Asian Development Bank is suggesting diversifying the economy by working to increase fisheries revenue, across the 1.9 million sq km exclusive economic zone.

These efforts, if supported with targeted technical assistance from development partners, could better position the Cook Islands for long-term growth once arrivals resume and mitigate short-term downside risks, the report says.

Pamela Maru, the Secretary of Marine Resources, agrees. There is an opportunity to diversify the fishing industry for longer term gains, she says.

The Ministry already has work underway to explore revenue generation and economic stimulus through the sustainable use of marine resources – not just offshore fisheries, but also inshore and aquaculture.

There are particularly important for food security, livelihoods and small scale development opportunities, especially in the Pa Enua, she explains.

Cook Islands makes money by selling access to its fisheries, she says, and was already looking to enhance that before Covid-19 hit.

“Over time we have been strengthening our fisheries management arrangements, enabling us to not only access, but to better understand, the fisheries economics, including vessel profitability, and what benefits we can derive from our fisheries as resource owners.”

Those benefits are much broader than just government revenue, she notes.

There is an opportunity to provide a better environment for domestic fisheries operators, providing far greater contributions to the country than licensing foreign ships.

“However, operating out of Cook Islands ports is challenging, and requires more effort to create an even playing field for our domestic operators.”

Their competition, she says, is highly-mobile distant water fleets, and other ports with lower operating cost structures and more services available for fishing vessels.

Any restrategising for short term gains may be too late for now; the fishing industry is already reeling from the effects of Covid-19.

According to the Finance Ministry, low fish prices in the second half of 2019, compounded by Covid-19 measures, impacted on fisheries revenue in the 2019/20 financial year.

The ministry says hindered access to ports and supplies, and limited onshore processing services, have resulted in vessels being tied up or waiting at sea for access to onshore services.

Major disruptions in the supply chains to the fresh fish market (that is, Japan) will impact the export of these products from Rarotonga and its subsequent contribution to GDP, the ministry predicts.

“Continued disruptions to supply chains will likely affect the supply and demand for raw fish material/product, and therefore demand for access to our EEZ.

“As such, any opportunities to maintain and enhance revenue streams to mitigate some of the impact of Covid-19 on the economy will be investigated.”

Don Beer is the president of Cook Islands Fishing Association, which oversees 25 fishing clubs from Rarotonga and the Pa Enua.

The members are mostly subsistence fishers and some supply their catch to the local markets in Rarotonga and Aitutaki.

The other islands are marine-based communities who do little planting and mostly rely on fishing for food source and income.

The Finance Ministry says the suspension of tourists and other arrivals in to the country has had a marked impact on the local market, Rarotonga in particular.

“The saturation in supply of oceanic species such as tuna, has created increased competition between artisanal and commercial fishers, where they used to fill different niches in the market i.e. supply to restaurants, hotels, tourist related operators versus local individuals and families.”

Beer says some of their members are feeling the effect of Covid-19 and are being forced to sell their catch at reduced prices.

“It’s certainly hard in itself and the market is not there like it used to be before. The fishermen who used to supply the local market are being forced to sell their catch at a cheaper rate, this has surely affected their income.

“There is also an increasing number of fishermen. Some of who had fulltime jobs with private and public sector have now turned to fishing to feed their family and for income.

“It’s a difficult period for local fishermen. But fishermen are resourceful people, they are resilient and they take care of themselves. As long as the fish is there we will go and catch it.”

Ocean Fresh boss Bill Doherty has been doing his best to keep his staff on, and his two fishing boats on the water – but as the crisis began to bite, he said they were losing $5000 or $6000 a week.

He didn’t want to go cap in hand to government, he said in April – but by June they had been forced to sign up their 14 staff to the subsidy.

Last year he air-freighted $300,000 or $400,000 worth of fish to Australia and New Zealand. That market’s shut down. He sold to restaurants and resorts. That market’s almost disappeared, too. Last year the company grossed about $3.2 million; that’s now dropped by 75 per cent.

At the OceanFresh store in Panama, they have been selling fresh chilled yellowfin tuna for as little as $12 a kilo, at times. Compare than with New Zealand, where equivalent Bluefin tuna goes for $55 a kilo – and that’s been frozen for weeks or months.

Steven Kavana, known to tourists as Captain Moko, has been supplying fish to the local market for over 10 years. Yesterday, he was preparing for another night out at sea.

He used to earn his money from tourists too, taking them out fishing for yellowfin tuna and more.

But with that income completely wiped out, Kavana is now fishing only for The Mooring Fish Café that his wife runs, as well as some local buyers.

“It’s very hard to sell our catch these days,” he says.

“The restaurants are not buying in bulk anymore, they just buy enough for a day or two. There are others in the community who also buy the fish off me but we don’t get good prices like before.”

Environmentalist Kelvin Passfield says the Ministry of Marine Resources needs to carefully consider conservation and sustainable management of the industry while looking at diversifying fisheries.

They should not allow an increase in vessel numbers but concentrate on getting high returns for the vessels that are already licensed, says Passfield.

In 2019, a total of 120 licensed vessels were managed by the Ministry of Marine Resources. These include 55 long liners, 51 purse seiners, 11 bunker vessels, two high seas trawlers and one high seas potting vessel.

“Cook Islands have already issued a number of licenses under the US Treaty and they are allowed to fish in the Cook Islands waters for so and so many days,” Passfield says.

“They are not using their full allocation and the ministry should be looking at ways to encourage them to use their allocation rather than increasing the fishing days and issuing more licenses.”

“In fact, this whole Natural Currency Standard the Ministry of Marine Resources is working on to get high return for fish because it’s being sustainably caught will go a long way in trying to increase revenue in fisheries industry.”

The standard looks at creating a path to market demand for Marae Moana-caught albacore that is “best-of-class” in quality, sustainability, social justice, cultural benefit, and price.

According to Cook Islands government, the main benefit from fishing activities is revenue from treaty arrangements, licence fees and the sale of catch quotas. The revenue collected in 2018/19 was $18 million and $11.5 million is estimated for 2019/20.

In December 2016, longline regulations for the Quota Management System were enacted. Under that system, a total allowable catch of 9,750 tonnes of albacore tuna and 3,500 tonnes of bigeye tuna per calendar year were set.

The quota system was implemented in January 2017, with revenue returns of around $4 million received annually, exceeding previous licensing arrangements which returned around $2.4 million per year.

According to government, a significant portion of revenue comes from the purse seine fishery, where the Cook Islands Exclusive Economic Zone has a total limit of 1,250 fishing days in accordance with conservation and management measures implemented by the Western Central Pacific Fisheries Commission.

During 2016, the US and Pacific Island Parties negotiated a new US Multilateral Treaty with a six year term. Under the Treaty, Cook Islands commit a pool of 350 fishing days annually before the start of the calendar year. US fleets operate under Cook Islands pool days through the Treaty, or purchase additional days.

In January 2019, the government renewed licenses for two Spanish purse seine fishing vessels under the European Union (EU) Sustainable Fisheries Partnership Arrangement. Under the eight year Agreement there is a four-year protocol for fisheries access allowing up to 7,000t per year to be fished by EU Purse Seiners.

This arrangement accounts for approximately 160 of the total 1,250 vessel day limit.

Most Cook Islands fishermen go out just for the day. Some, like the OceanFresh fishermen, may go out for a week. When government has sought to clip the ticket on overseas factory-scale boats, like the European purse seiners, it has proved controversial.

Purse seining provoked a protest march down the main street of Avarua. So the idea of creating an industrial-scale local fishing sector still seems remote.

But if the government is looking at diversifying the industry, there are chances this could be discussed in the future, he indicated.

One thing is certain, with no tourists, and the restaurants and resorts on a go-slow, fishermen like Captain Moko need a new way to catch their fish – and a new international market in which to sell it.