Blackbirds: Shackled inside the slave ships to Peru 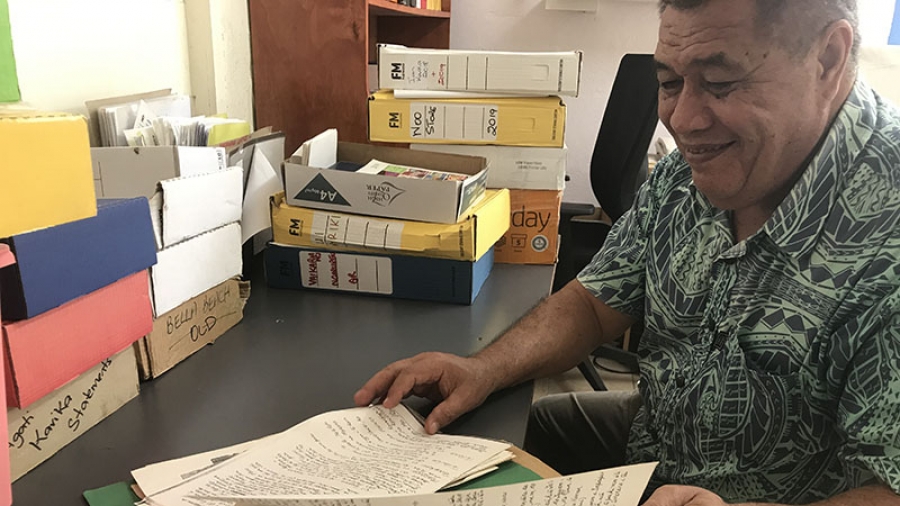 As the world commemorates the abolition of slavery, leaders like Donald Trump and Scott Morrison have downplayed that brutal history. Yet there are Cook Islands families who still feel the pain.

One who did was Pani. His story has barely been acknowledged in the written histories – but it is remembered by his people on Tongareva.

He managed to escape the slave ship when it anchored off a French Polynesian island, and swim ashore; it was years before he was able to get a passage back home on a British frigate.

He returned with grim accounts of a ship that bore a striking resemblance to those slave ships that brought Africans to the Americas. He and his people were shackled below deck, he told them.

Wilkie Rasmussen is descended from the same family as Pani; he comes from the same village. In his office in Avarua, he keeps some of his family’s handwritten ara tuakaha books, their histories and genealogies.

“There were told to get down in the hold – it was a double-deck vessel, the Adelante, and they were shackled.”

To be clear, the people of Tongareva went aboard willingly, on this first occasion.

Their island had been devastated by a coconut blight and they were struggling to feed their children; churchmen from the London Missionary Society encouraged them to embark for the cotton plantations of Peru, to earn money to build the big coral churches they aspired to.

But once they boarded, their dreams were quickly shattered. Historian Harry Maude says the 151-ton bargue Adelante was the first of the slave ships to plunder Polynesia, and it provided a model for those who came after. It was more a Man-o-war ship than a merchant trading ship.

The hold was divided into three compartments with iron gratings over the hatches to prevent escape, two swivel guns were mounted to sweep the deck, two more on top of the poop. The hatches were guarded day and night by sailors armed with muskets, blunderbusses, revolvers and cutlasses.

More ships like Adelante followed. As word spread, Cook Islands Ariki and Orometua started turning them away – and then the slave traders began resorting to kidnapping. They would drug young men and women with brandy and opium, then throw them in the hold.

Cook Islander researchers in Australia believe some also ended up on Australian sugar plantations – despite Prime Minister Scott Morrison’s denial of slavery in the Big Country.

Rasmussen tells of families being torn apart in slave auctions in Callao, Peru.

“The conditions were pretty horrible. They were made to work in conditions they were not used to. I can just imagine the fathers and daughters being auctioned off and separated – the hurt.”

He hopes that government will in due course pay for research on what happened to those people from Tongareva, Rakahanga, Pupapuka, Atiu and Mangaia, taken away and never heard from again.

And he thumbs through his family’s ara tuakaha. “It’s almost as it whole pages are missing from the Tongareva book.

“In the times of our grandfathers and grandmothers, the pain was very visible and they talked about it quite a lot.”

“The effect on our island was quite catastrophic. We now have missing pieces in our ‘akapapa,” he says. “There have been generations that have been cut off from their heritage.

“There was a grave injustice done, and that is deeply embedded in the Tongareva psyche. That will never go away.”

OPINION: The slave ships’ raids cost Cook Islanders a wealth of knowledge, beliefs, and behaviours that would not be passed on to future generations, writes Rachel Yates, Te Papa museum’s curator for Pacific cultures.

Harry Maude’s Slavers in Paradise (1981), about the Peruvian slave traders and their short but devastating presence in Polynesia in the second half of the 19th century, is a heart-breaking yet gripping read.

In many instances I found myself unable to read long passages at any one time.

On one occasion I had to put the book down after reading about helpless fishermen, working to provide for their families, being chased down on the open sea by larger faster ships and taken unwillingly to Peru.

In the 1800s, many of Peru’s exports came from large plantations producing sugar, cotton, grains, and olives, etc. as well as coastal guano mines. They were lucrative industries requiring a large labour force, provided in the form of slaves.

These industries experienced huge change when, in 1854, slavery in Peru was abolished and business owners struggled to find workers to continue production of these large enterprises. Under pressure from landowners, the Peruvian government passed a law in 1861 enabling the importation of workers including Chinese coolies and Polynesians.

Slavers in Paradise looks at the traumatic events of recruitment (which included people leaving their home islands by choice, being misled and also those who were forced and kidnapped) by Peruvian ships in the Polynesian region.

Theoretically, Polynesians were taken to Peru as migrant workers and were classified as colonists who willingly entered the country on the premise that they would work in reasonable conditions, be paid, and returned to their homes. In actuality, they were slaves. They became the property of others and were subject to their rules and conditions for not only the work required of them but their lives.

The Cook Islands play a significant role in this heritage as the practice began in the Northern Cooks in 1862 when an unscheduled stop in Tongareva (Penrhyn), the northern-most atoll, led to the first recruitment of people from the region.

The first vessel Adelante and her crew were en route to Melanesia in pursuit of workers and wanted to call by Tongareva’s lagoon after hearing about the abundance of resources such as pearl shell that could be found there.

Upon arrival though, they were met by locals eager to leave their homes for a number of reasons; including that at the time, the coconut palm, one of the main sources of food, was being ravaged by a disease leaving their crops inedible, and there was a real concern that famine would force them to relocate.

The London Missionary Society had an important presence on the atoll and from their perspective, work abroad was an opportunity to bring income back to the community and build impressive churches to rival those on Manihiki, Rarotonga and other islands of the Cooks.

A significant financial gain was made by the shipping company and within three weeks at least five Peruvian ships left for the Cook Islands and neighbouring Pacific nations with the sole purpose of making profit by providing a labour force for Peru industries.

Over the period when ships were frequenting the area, from the Northern Cooks a total of 472 recruits from Tongareva, 145 from Pukapuka, and 115 from Rakahanga left for Peru. In contrast to this, the Southern islands of Mangaia and Atiu only recorded 11 men leaving.

The rocky volcanic terrain on these islands acted as a natural environmental defence against kidnapping, and the populations were well provided for in terms of food and resources, so there was no real incentive to leave. The 11 recorded as being captured from these islands were all men who for one reason or another went on-board the ships and were trapped there.

More than 3,000 Pacific Islanders reached the shores of Peru. Of those taken away, 743 were from Cook Islands: 472 from Tongareva, 115 from Rakahanga, 145 from Pupapuka, six from Atiu and five from Mangaia.

Tragically, of the 3,000-plus Pacific people taken, only 148 were repatriated back to the Polynesia, and 111 of those were Kiribati who were dropped off in Tongareva.

The majority of those who left their islands on ships for Peru died – more than 90 per cent.

Many failed to acclimatise to harsh working conditions in Peru, their immune systems were weakened and some were lost to diseases such as smallpox and infections from dysentery.

The collated data tables, records, and oral histories assembled by Maude gives us an insight into the devastation left behind after the loss of life.

If culture is “the integrated pattern of human knowledge, belief, and behaviour that depends upon the capacity for learning and transmitting knowledge to succeeding generations”, what were the effects of the loss of so many people in places like Tongareva?

The sudden departure of more than half the population meant losing a wealth of knowledge, beliefs, and behaviours that would not be passed on to future generations.

Reflecting on loss in the context of language, a line of scholarship I will never forget from undergraduate studies many years ago comes from Samoan scholar Galumalemana Tuiletufuga Hunkin who wrote that “the relationship between language and culture is like oxygen to human survival”.

Language is a central feature of culture and a way in which we can connect to our “mana and the vaerua (soul) of who we are as peoples”.