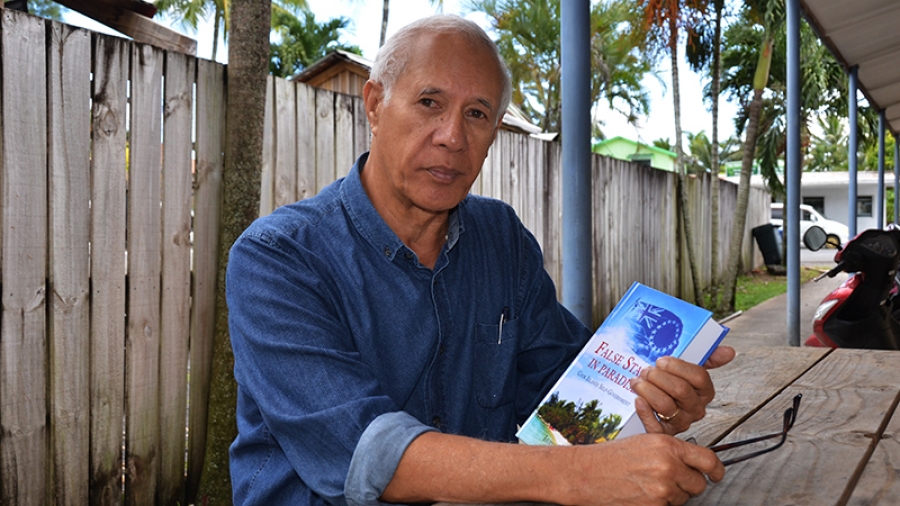 Former Government minister Iaveta Short says there is too must travel and wastage, and not enough checks and balances on government.

When Iaveta Short finished the first draft of his new book False Start in Paradise he realised, “this is not a good story”.

The book itself is a brilliant read – it’s informative, eloquent and in some parts, entertaining too.

But it’s not the story many would want to be reminded of, especially those who have held power for most of the past 50 years of Cook Islands self-governance from New Zealand.

“But I think the truth ought to be told, it can’t be truth if you cover it up.”

False Start in Paradise is an attempt to record many of the events and people who contributed to the “enthralling, difficult and politically turbulent period in the short life of a tiny island democracy”.

It unravels decades of political see-sawing – from enigmatic Sir Albert Henry’s “attempt to build a self-serving empire, manipulate the political system and use government’s fund to stay in power” to Sir Tom Davis guiding the Cook Islands into a “liberal, free market, open economy”.

Short, the first Cook Islander to graduate with a law degree from Auckland University, had a bird’s eye view of the turbulent periods following self-government in 1965. He was also a former Cabinet minister in the Sir Tom Davis government and High Commissioner for Cook Islands in Wellington.

“The story about the domination of our people in the last 50 years has to be written, the years of the pooh-bah,” says Short, now a successful businessman.

Short bore the brunt of the power play when he was barred from contesting for government scholarship after his father took a stand against the then administration.

“Can you imagine sitting in a scholarship examination and being taken out, it’s not fun. I didn’t realise what was going on until I got older and asked ‘hey why would they do that to a young kid’.

“Actually it shows you that the element of vengeance of enforcing their superiority was more than just an endemic, it was a problem so I wanted to highlight that a bit in the book.”

Through False Start in Paradise, Short also pays homage to what he called “the Blue Book” – Cook Islands Politics assembled and edited by Ron and Marjorie Crocombe in the late 70s.

He says the purpose of his book is to record as much of the history because there was no one else doing it.

“I don’t want our history to be written by researchers trying to do a PhD degree because all they’re going to do is refer to all the documents, which is only a third of the picture. The interaction and all that went on in the government those days is bigger picture and has to be written by a Cook Islander.

“It’s also a critical eye because our people always praise government, praise New Zealand, praise, praise, praise all the time. It was inculcated into them.

“If you want to go somewhere you need to say ‘yes sir, thank you sir’ that’s what you do. So it’s very hard to extricate our people from that type of thinking.”

Writing this book was not easy, Short admits. It took him about five years to put the book together after having abandoned it two or three times with the thoughts of “let sleeping dogs lie”.

He paid tribute to former University of the South Pacific director Rod Dixon and lawyer Tim Arnold for their editing and contributions.

“One of my big problem is my English is not very good. I couldn’t master it. The verb and grammar checks on computer helped a lot. When Tim read through my draft and corrected it while adding bits and pieces, he said to me ‘I don’t know where you learned your English from,” Short says with a laugh.

“I said looking into his eyes ‘Tim you try writing a book in Maori (because he speaks Maori) and I will check it for you then you will not question my English any more’.”

Short hopes his book will inspire other Cook Islanders to take up the challenge of recording the country’s history for future generations.

He only hopes they will have something good to write about.

“A good book will require a good story and a good story is when our government wakes up and do things better. We have massive problems with our own administration.

“So a good story will only happen if indeed we have a good government. In fact I think the government we had in our period is better than any other government because we had genuine interest in doing the right thing.