Tempting fate on our storm-prone coastlines 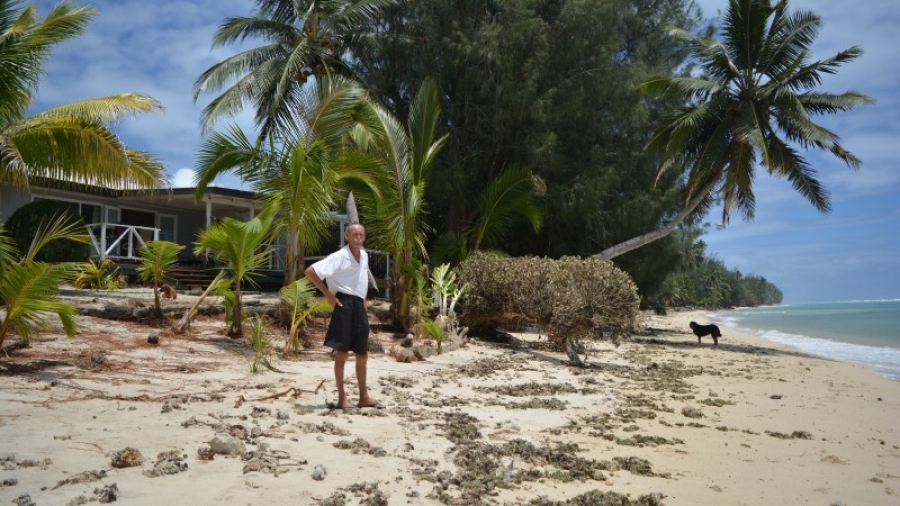 Howard Henry has just cleaned up after ex-cyclone Sarai; now he's getting ready for Cyclone Tino.

Howard Henry says we are building a rod for our own backs with intensive development causing coastal erosion – making us ever more vulnerable to storms.

Arorangi resident Howard Henry has one of the best views on the island.

From his back porch, surrounded by oak and coconut trees, he has a front seat view of the Pacific Ocean.

His house, built in the early 1970s, sits on his grandmother’s land just beside the sea shore.

Just metres away from where his barbeque once sat, before the tail of cyclone Sarai whipped it away, laps the lagoon.

Henry, 67, still remembers when the land was surveyed all those years ago. Now he reckons those pegs could well be in the water, clear evidence he says of how much coastal erosion has taken place.

“When this place was built it wasn’t that close to the beach. The house was a good 25-30 metres from the beach and that was the early 70s.”

An original foundation staff member of the External Affairs Division to the Cook Islands Government in 1973, Henry resigned from the Cook Islands Public Service following major restructuring in 1979.

He has since lived between New Zealand and Rarotonga, over which time he’s watched the landscape change.

“I’m concerned at what had happened and am mindful that nature moves in mysterious ways and you can’t stop nature.”

Like the debris that washed up at his door step on New Years’ day from cyclone Sarai, Henry says the cyclone carried another message to his door.

“You could say that all these storms are climate change but I’m not convinced of that. It’s environmental change.”

By environmental change, Henry means coastal developments over the last century that have invited more and more homes to be built along the sea side.

“This whole block of land, nobody lived here. It was full of oak, old coconut trees and bush and then 50 to 60 years ago, all along this Arorangi south coast, people started moving in, clearing land, clearing vegetation, clearing shrub to build homes – and what that’s done is it’s opened the land up to erosion.”

It’s an issue he believes is getting worse with time as the cyclone-prone island exposes itself to more vulnerability and he has legit concerns for coastal houses sitting on the edge of Rarotonga’s eroding coastlines.

“What I’ve noticed since I’ve been coming on and off to this beach since the 60s is that the erosion on the land is filling up the lagoon.”

“Today when you go at low tide from here to the reef, halfway across you’re still only knee-deep.”

At his age, Henry has seen plenty of tropical storms.

Cyclone Ofa in 1990 was considered the “worst” cyclone to hit the Pacific and causing significant major damage to the islands of Samoa, Tuvalu, Wallis Islands, Tokelau, American Samoa, Tonga and Niue.

Eight people lost their lives and its impact was felt in the Cook Islands as well.

Henry remembers the swells climbing even further than they did on New Year’s Day with the lagoon lapping on his back door. But he feels there was a lesson curve to take away from Cyclone Sarai.

“It wasn’t a massive storm. It was a big one but it’s certainly taught me and taught us a few lesson and if you’re building next to the beach or close to the beach you’ve got to be prepared for these things.”

For Henry and others like him on the west coast, moving their house back 30 metres inland is not an option. And he loves his family land.

On the sections beside him live his sisters, grandchildren and extended relatives. Their family history and identity tied to this place.

For Henry that means coming up with ways to help combat coastal erosion, of which he believes is everyone’s responsibility.

“How can we stop it? We can’t stop it so what are we going to do to try and protect it?

“The only other way and what I would like to do that would be quite a success is replanting, reclaiming bits of land and planting coconut trees, planting shrubs, planting anything. And that has had an effect on helping stabilize but the trouble is some of them are a bit too young.”

He has a warning for those planning to build their paradise home along sea shore, particularly in Arorangi: “They need to be aware that from time to time they do get swamped, they do get these major sea surges.”

Cook Islands are now on alert for the second cyclone to hit the Pacific this year. As Cyclone Tino approaches, Cook Islands Meteorological Service is urging locals to be prepared for a grazing this weekend.

This instils more angst in the hearts of sea side residents like Henry, not even halfway through the cyclone season.

Because it may just take just one devastating natural disaster to take it all away.

“Really, living here, you’re only protecting the land,” he muses.

“You’re only caretaker while you’re living on it and it will soon pass down generation through to generation so while you’re on the land I think you’re obligated to look after and protect it.”