Rachel Reeves: From cyclones to coronavirus 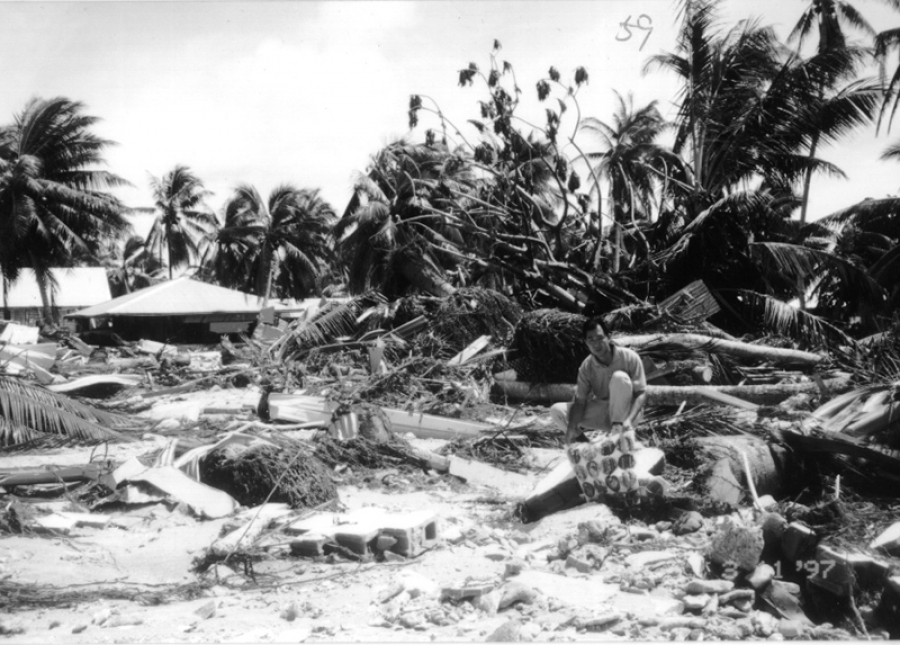 A survivor takes in the devastation of Tropical Cyclone Martin. 121102140

As Cook Islands faces the new Covid-19 crisis, what can we learn from managing past disasters? Last week, lessons learnt as a result of the Cook Islands’ most tragic weather event featured at a conference held to discuss building resilience in the Pacific Islands.

Prime Minister Henry Puna, Cook Islands Meteorological Service director Arona Ngari, and journalist Rachel Reeves were invited to Honolulu to provide keynote talks at the annual gathering of PRiMO, or the Pacific Risk Management Ohana. The primary focus of their contribution was Cyclone Martin, the storm that devastated Manihiki in 1997.

“We never expected a cyclone of that magnitude to hit us on the first day of the season,” Puna said.

“But it did. And the funny thing about Martin was it was actually moving away from Manihiki. It was moving towards the west, towards Pukapuka, close to Samoa, but somehow it just turned on itself and went back.

Reeves shared some of the stories shared with her during the reporting of Matini: The Story of Cyclone Martin, a book about the storm commissioned in 2014. She also showed video footage from her interviews.

She said that what struck her, after reflecting on more than 140 interviews with people who were there, was that so much critical information is lost in the process of “moving away from traditional knowledge, a process by which values and paradigms shift, which is a complicated process and which involves people being convinced by other people that what they know to be true is not relevant”.

For example, she pointed out, most of the casualties came from an area that for centuries, people had avoided living in because they understood the topography of the reef and its implications for the shore.

“We talk about traditional knowledge as if it’s static, as if it belongs to the past,” Reeves said.

“But I just want to make the point … that we’re talking about a way of learning, not just a series of things that were learned. We’re talking about a system of observation that is critical, I believe, to building resilience to weather and adapting to climate change.”

Ngari, who has been the country’s most senior weather expert for more than two decades, spoke about how he still listens to his father, a fisherman in Rakahanga who knows how to read and anticipate weather patterns without satellite imaging.

“I think that the story of Martin is such a great example of this last point because the people of Manihiki lost most everything but they didn’t lose their sense of community, as the Honourable Prime Minister mentioned this morning. They helped each other to get back up. The losses that the people of Manihiki suffered were so big. But their spirit was so much bigger.”

Many PRiMO organisers and attendees commented that the story of Cyclone Martin allowed them to remember that at the heart of their work is people.

Samoa’s deputy prime minister, Fiame Mata’afa, reminded attendees during her keynote speech that building resilience in the Pacific is not a one-size-fits-all kind of endeavour, but requires an understanding of the various contexts and perspectives that comprise the region.

Conference organiser Jean Tanimoto described PRiMO as an opportunity “to not just think about sea level rise and inundation, but also think about the health of our communities, our economies, and think about the way that our relationships and our systems are working”.