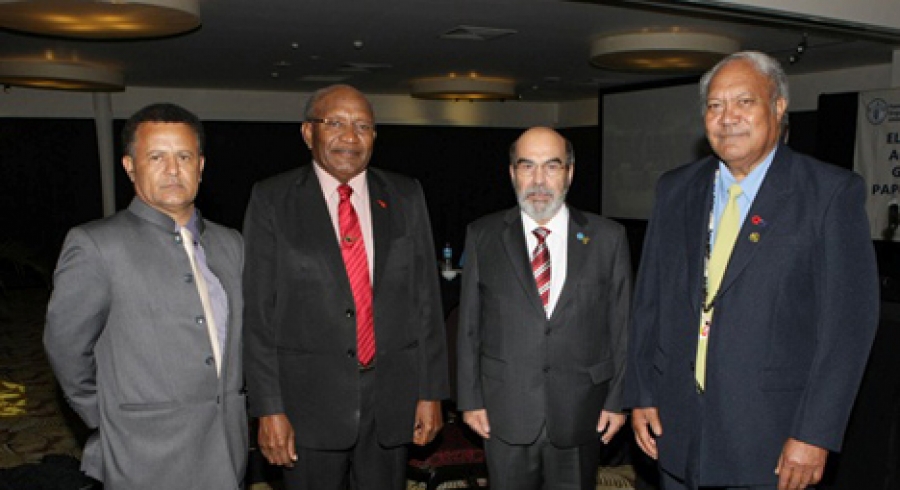 Authorities on agriculture from across the South Pacific rallied together in Papua New Guinea last week to get ‘climate smart’.

Or at least that was the theme at the Eleventh Meeting of Southwest Pacific Ministers of Agriculture in the town of Port Moresby.

A discussion about progress on the development of agriculture, forestry and fisheries within the Pacific member states was the basis for the meeting.

“Clearly new approaches are needed for a climate-constrained agriculture and high priority in this regard is disaster preparedness and response,” Dion said.

“Climate change is now becoming a development issue to prevent or at least mitigate its impact in the Cooks.”

Food and Agriculture Organisation Director-General, José Graziano da Silva stressed how climate change posed a threat to the very survival of the Southwest Pacific and most of the small islands around the globe.

“Climate change can only be addressed using an ‘all of government ’approach.”

He said ministries of agriculture, fisheries and forestry needed to be at the table when countries developed and implemented domestic policies to address climate change and national positions for the negotiations.

“FAO is here to help and provide support on how to actively participate in those debates.”

Another key point addressed at the meeting was the issues surrounding the extremes of malnutrition and obesity.

Referring to undernourishment and the need for healthy diets, deputy Dion said persistent hunger and malnutrition remained the norm for millions of people.

“Global concerns on food security impose obligations on national governments to establish non-discriminatory and non-political laws to ensure that their population has access to adequate food.”

FAO would address the problem of nutrition and NCDs in the Pacific through a series of measures, including the Pacific Regional Initiative on Value Chains for Food Security and Nutrition in the Pacific Islands, he said.

Just last week the Cook Islands were named as the most obese country in the world by the World Health Organisation.

Their figures showed that 50.8 per cent of Cook Islanders are obese, as are 45 per cent of the inhabitants of Palau and Nauru and 43 per cent of those of Samoa, Tonga and Niue.

Secretary of the Ministry of Agriculture, Teariki Matairangi Purea says in general, the meeting was very useful, especially for the FAO work programmes already in place in the Cook Islands.

Purea says the Cook Islands is on target with this project especially in the southern islands.

“Other FAO programmes are already completed and new ones are being formulated according the Government priority areas.”

Assessments carried out by KVA Company (Kolone Vaai of Samoa) showed that the Cook Islands is on track with all programmes, unlike countries like Fiji and Vanuatu which are reported to be making slow progress.

“The next step is to continue working hard in implementing and improving our work to achieve our goal in Government priority areas,” Purea says.