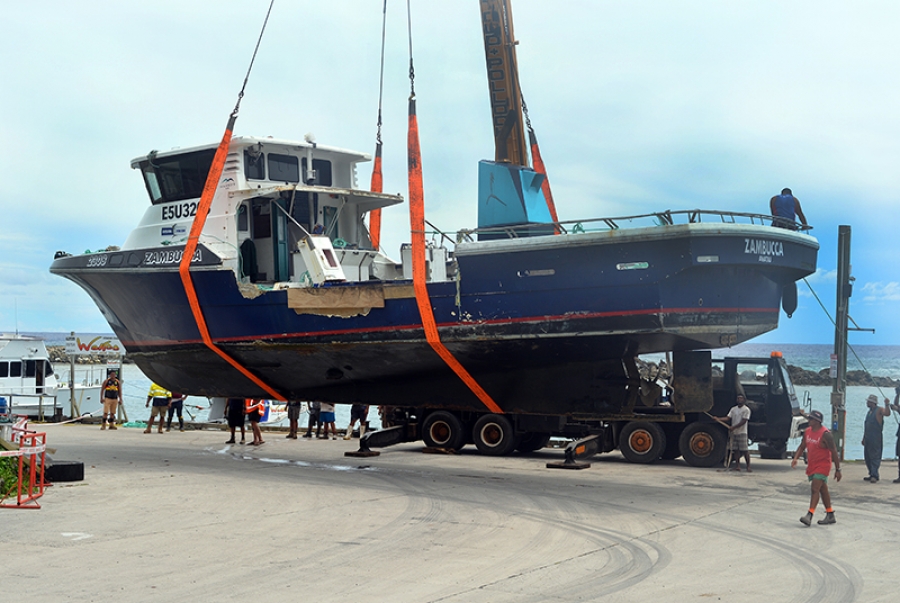 Damaged fishing vessel Zambucca was lifted out the water yesterday, as the Ports Authority warned boat owners that the harbour could soon need to be evacuated. 18020608

Sea swells could force the closure of Avatiu Harbour this week, raising questions about the fate of the Tiare Taporo, which remains moored at the wharf despite promises from its owners that it would be back in service early this year.

Waves in excess of five metres and strong northerly winds are being forecast for the weekend and the Ports Authority confirmed that harbour users had been told they might have to leave.

Although an evacuation notice has not been issued by the harbour master, it is understood that the Ports Authority expects vessels to be ready to sail at short notice if the bad weather arrives.

Cargo vessel Lady Moana was due to depart for the northern group today and damaged fishing vessel Zambucca has already been lifted out of the water by Ocean Fresh, with repairs to the longliner set to start soon.

But there was no sign of any activity yesterday on board the Tiare Taporo, which has left the harbour just once in the past 18 months.

As part of a court judgement last year the boat’s owners, Pacific Schooners Ltd, were ordered to show that the vessel could be moved, and in October the vessel did sail out of Avatiu in order to prove to the Ports Authority that it could be evacuated.

After that trial run, the onus is now on the owners to comply with any order to clear the harbour.

There are fears that the vessel could damage the wharf or even sink in the harbour and that could block access for container ships and cause economic harm to the Cook Islands.

CINews was yesterday unable to contact any representatives of Pacfic Schooners Ltd.

Bim Tou, general manager of the Ports Authority, said that a message had been sent to all boat owners alerting them to the forecast but stressed that the harbour master had not issued an evacuation notice.

If and when that happens, vessels will have between 24 and 48 hours to leave the port.

“I would expect boat owners to have started some sort of mobilisation,” he said on Tuesday. “If there is an evacuation notice we will expect all vessels to vacate the harbour as instructed.”