7.52am: Partial eclipse off the chart 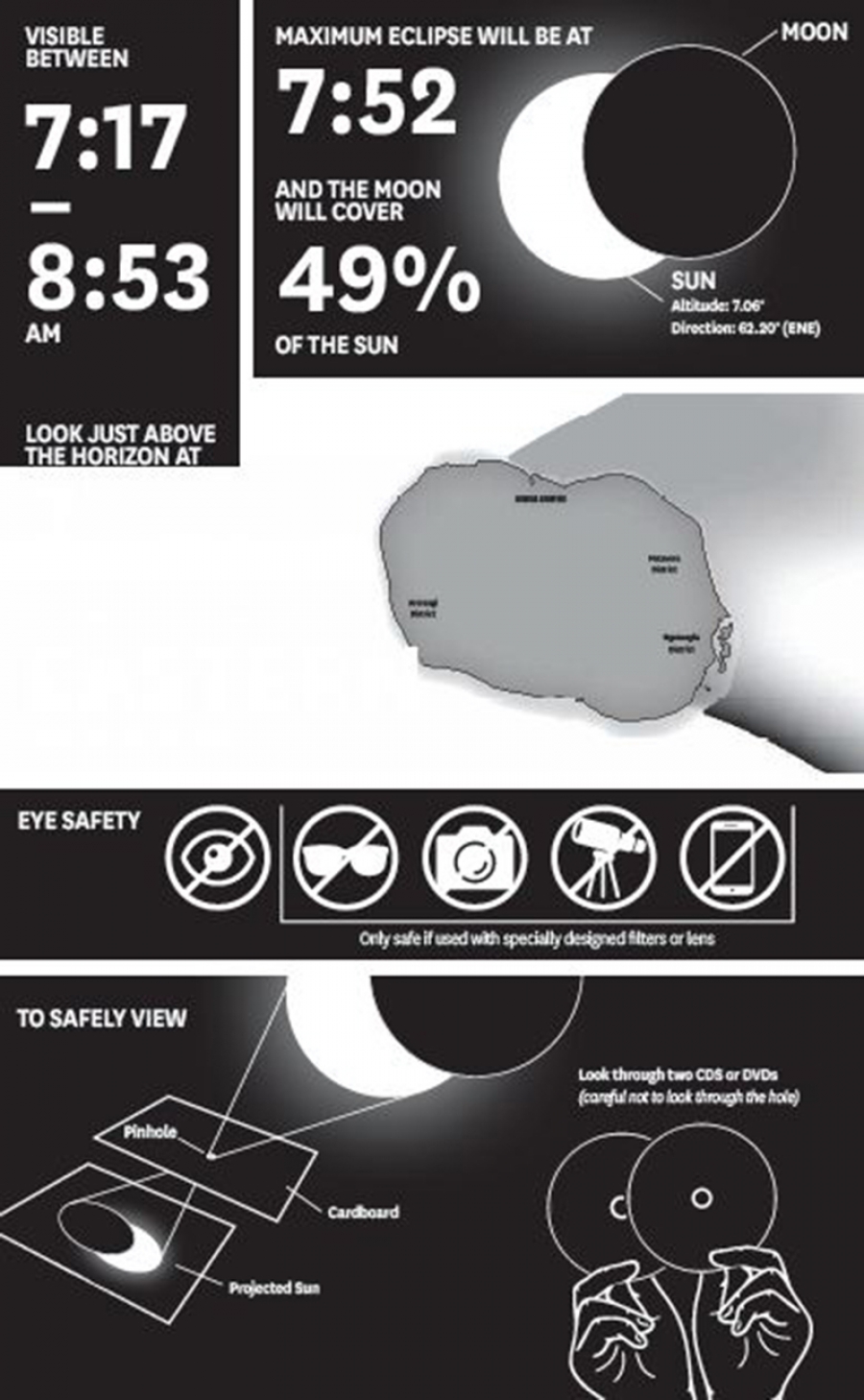 As a half-masked sun rose today, resorts in Muri and on Rarotonga’s east coast were this morning letting their guests know where to watch the eclipse.

The rare solar eclipse is most remarkable at 7.52am. Astronomers promise an “epic” view of the partial eclipse if the weather stays clear this morning.

Pacific Resort regional manager Ani Thompson said they were notifying guests of the eclipse and the best time to view it.

The total solar eclipse (in which the sun is entirely obscured by the moon) will only be visible a thousand kilometres to the south-east, by well-heeled stargazers paying for berths on specially chartered cruise liners.

But on Rarotonga and other islands in the Southern Group, a spectacular partial eclipse should be visible – as long as spectators take care to protect their eyesight by avoiding looking directly at it.

The moon will obscure 49 per cent of the sun.

“There are certain types of lunar cycles that hold significance in our culture, like certain moons which we follow to do things such as fishing, planting or having twin babies,” she said.

“Our ancestors were quite brilliant in this area and there are people around who still follow these practices.”

Guide to the eclipse

A partial solar eclipse occurs when the sun, the moon and the spectator’s position on Planet Earth are not exactly aligned. In this case Rarotonga is located outside the path of totality so the moon’s shadow will not fully cover the sun.

In Rarotonga we will see a partial eclipse in an East NorthEast direction at sunrise.

For this eclipse you will need to find somewhere on the eastern side of the island to watch, anywhere between Tikioki and Tupapa.

Those watching from Muri will be in for an epic view with the lagoon on the horizon.

Operational observer for the Cook Islands meteorological service, Manea Maretapu said there is a good chance there will be a clear view of the partial eclipse this morning.

However, Maretapu said Rarotonga will be experiencing a cloudy period over the next three days with possible showers.

The eclipse will be already in progress as the sun rises at 7:17am and it will end at 8:53am. At 7:52am the sun will be 49 per cent covered by the moon and that is the most we will see.

The path of totality for this eclipse lies almost wholly over the south Pacific Ocean with the first landfall being at Oeno Island in the Pitcairn group.

Keen astronomer Phil Evans stresses that the safest way to view the eclipse is with special eclipse glasses. Ordinary sunglasses, whether polarised or not, are not good enough and using them to look at the sun can cause permanent eye damage.

He has found that viewing the eclipse through two CDs held together gives a safe and comfortable way to see a partial eclipse (but don’t look through the hole in the middle of the CDs).

During sunrise, you can photograph the eclipse using a digital camera. Set your ISO to the lowest value such as ISO 100, and your camera mode to Manual.

Stop your lens aperture, which is generally between f/5.6 and f/8.

Czech photographer Petr Horalek said the uncovered part of the sun will still be too bright to notice some prominent change, visually or photographically.

The next total solar eclipse visible from Rarotonga will be in 2176.