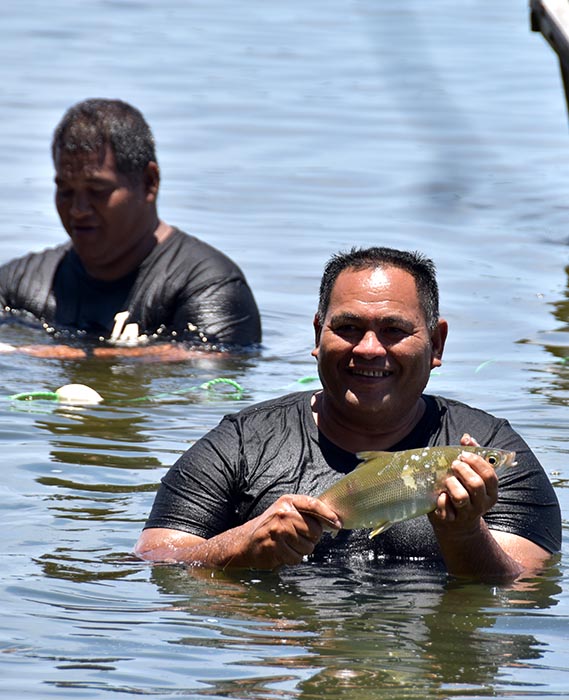 Fishers on Mitiaro harvesting milkfish that have been caught in a net. Photo: LOSIRENE LACANIVALU / 20112204

On Friday, the Arongamana of Mitiaro agreed to lift the Ra’ui on the lake of Mitiaro to harvest the freshwater milkfish.

Around 92 milkfish were harvested. Men gathered and surrounded a certain area of the lake, managing to trap their catch.

They fed the fish with coconut meat (white flesh of coconut) to get the fish closer to the land, then the men slowly went off on their boats and into the water surrounding the area with their fishing net.

Mitiaro mayor Makara Murare said milkfish were first brought to the island from Manihiki in the 1980’s. The second lot was brought two years ago in December. Murare said the fish have been preserved in the lake for the past two years and on Friday the Arongamana agreed to have it harvested and shared out to the people.

The island is hoping to introduce other kinds of fish to the lake, but don’t have the funding to do so. Men on Mitiaro getting the milkfish that have been caught in a net. LOSIRENE LACANIVALU / 20112205

“We got a lot of ideas but funding is the problem, we might get it in the future,” Murare said.