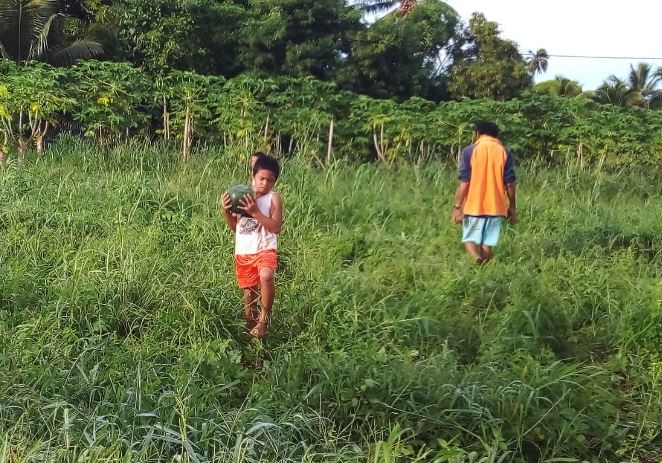 Planting is a family affair for Tui Tupa and her family – kids help out harvesting watermelons. SUPPLIED/22112430

Thanks to social media and a caring community, watermelon thieves who raided a family plot in Arorangi were identified on Wednesday – the same afternoon the awareness notice was posted.

Tui Tupa and her family are hardworking farmers who “plant all the time”.

Over the weekend, Tupa noted their very large ready to harvest melons had been picked, not all at once but over a few days.

Tupa believes the swift posting of the watermelon theft on the Rarotonga Community & Beyond Facebook page hindered the four male perpetrators from selling the produce.

“I’m really appreciative to our community for responding so quickly and passing on information like the vehicle registration numbers which gave us leads and on Wednesday we found them.

“Thank you to the community, this harvest is supporting our family especially our kids during the Christmas season,” said Tupa.

Tupa says she does not want to name the culprits, “but I want them to know not to do this kind of thing again. They have apologised and returned the watermelons today (Thursday)”.

She also sells her family’s produce every Saturday morning opposite the CITC supermarket.