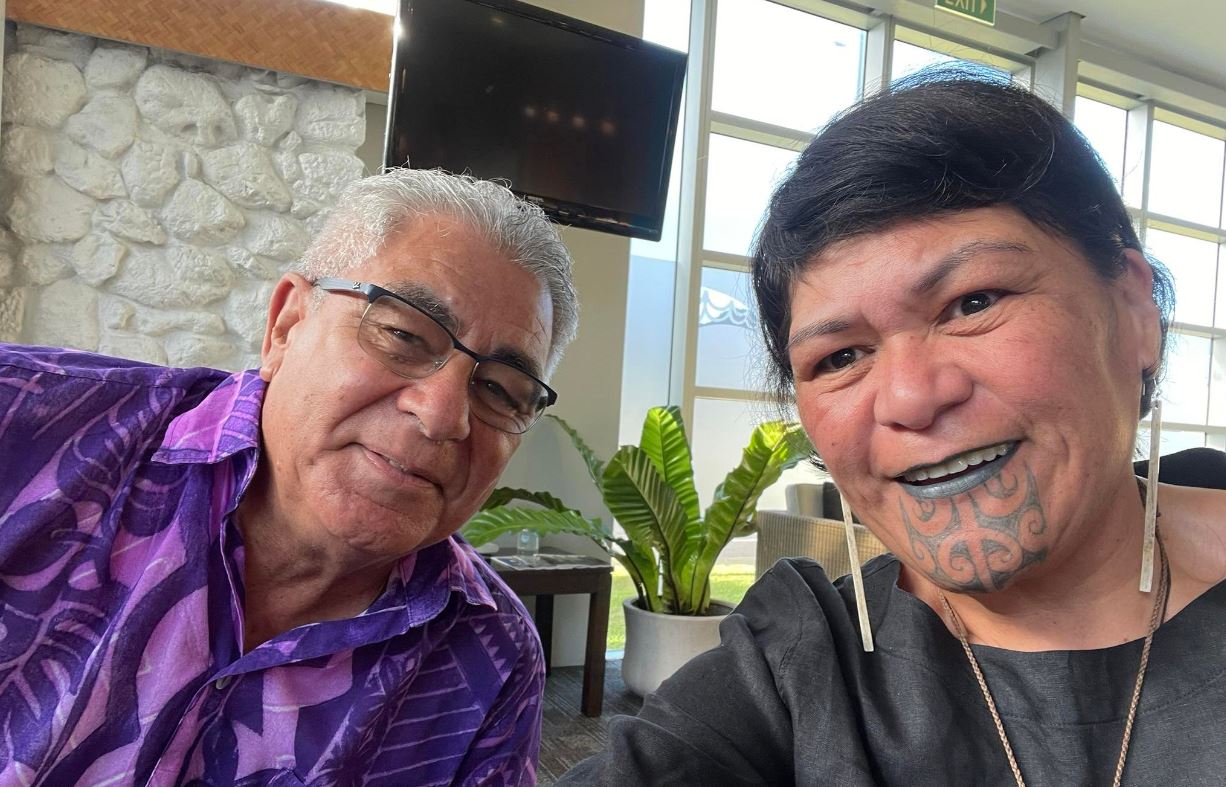 Kiwi 471 lifted off from Rarotonga airport a bit after 8am on Friday, October 14. On board the Royal New Zealand Air Force C130 Hercules transport aircraft, were 52 passengers and crew, heading for Manihiki atoll in the northern group.

The VIPs on board included the Prime Minister Mark Brown, the New Zealand Foreign Affairs Minister Nanaia Mahuta, officials from both governments, Rarotonga based contractors going to look at projects, and media from New Zealand.

Ahead of us was more than 12-hundred-kilometres – just over 650 nautical miles – of the mighty Pacific ocean; the largest body of water on earth. The only land we would pass over after leaving Rarotonga before reaching Manihiki, would be Aitutaki. Air Rarotonga Bandeirante passenger flights to Manihiki can take four hours and are often reduced to carrying just six people. Kiwi 471 would take 2 hours 40 minutes to cover the distance.

Actually it was partly to address and find a solution to that tyranny of distance and isolation that our journey was taking place.

There are about 250 people living on Manihiki at the moment, the two main settlements are Tukao in the north of the atoll – where the airstrip is – and Tauhunu on the western side of the lagoon. There are 43 motu in the reef surrounding the 9 kilometre wide lagoon, which is really the rim of a drowned volcano sitting on the ocean floor 4000 metres down. The combined land area of all the motu is just 4-square kilometres.

The coral runway is not quite 1800 metres long. Despite being easily accessible by the high performance, rugged and heavy lift C130 transport, the runway surface is not suitable for larger commercial passenger aircraft than those being used at the moment.

Sucking in coral debris is a nightmare for aircraft operators. And it is not uncommon for local pigs to come out on the runway at night rooting up parts of it leaving holes or soft spots which are a danger to aircraft landing, taking off, or getting stuck.

But a sealed runway 1500 metres long and 30 metres wide would be suitable to operate planes like Air Rarotonga’s SAAB aircaft, or the ATR planes Air Tahiti Nui used to fly from Tahiti to Rarotonga.

A SAAB would cut the flight time down to approximately 2 hours 40 minutes – the same as the Hercules – and the airfare could be reduced to $600 one way, half the current fare. There could be one flight a week, opening up regular opportunities for visitors local or tourists; opening up too the opportunity for freight both ways, particularly fish to Rarotonga.

It’s not too hard to imagine Manihiki becoming the hub for air travel in the northern group; with SAAB-like aircraft doing the longish haul back and forth to Rarotonga, while smaller planes feed passengers and freight in and out from the other northern pa enua.

The runway was one of three items on the agenda for the visit north, and looks like a goer.

There are issues to solve. People involved in that sort of construction work in Rarotonga went off to look at places where and how, heavy machinery needed for the project could be brought ashore. There will be major logistical issues like getting in the necessary materials, where the construction workers will live, and how they’ll be fed and watered given there are no supermarkets or hotels. All of which are matters dealt with in every remote construction project around the world.

Another item was the need to upgrade the atolls’ two solar power stations. The panels capturing the solar energy are fine after close to a decade of operation. But some of the batteries that store the electricity, are coming to the end of their useful lives. None of which was unexpected, wherever electricity is captured and stored for later use developing suitable and efficient batteries has always been the challenge. Interestingly and in keeping with the trend around the world of increased concern about waste disposal – particularly things like old batteries – Minister Mahuta asked what the arrangements are for that. The answer is to make that the responsibility of the battery manufacturer.

Although the Pa Enua all have solar power stations, they still need back up diesel generators for cloudy or stormy days when there is little or no sunshine and power can only be maintained by firing up the more expensive diesel power. A higher demand for power is also meaning that the diesel generators are being used more, and there is more stress on the failing batteries.

The third matter on the PM’s Manihiki shopping list involves the Pacific Leaders Forum meeting which will be hosted by the Cook Islands next year. It was last held here in 2012.

PM Brown would like to take the Forum Leaders to Manihiki for their retreat. In 2012 they went to Aitutaki. The retreat is a time when leaders can meet on their own without any officials present. Fifteen or sixteen countries are likely to attend.

Minister Mahuta‘s visit is likely to be seen as very successful. As well as being a senior member of the New Zealand Cabinet, she comes from a very important family in Aotearoa. Her cousin is King Tuheitia; her father Sir Robert Mahuta was the chief negotiator for Tainui in their settlement with the Crown, achieving a pay out of more than 100-million-dollars, the first big settlement and along with the Ngai Tahu settlement the biggest todate. He was  chief advisor to Dame Te Atairangi Kaahu – his sister the late Maori Queen.

Minister Mahuta has whakapapa links to the Cook Islands, to Takitumu and Aitutaki. As a New Zealand government Minister holding the Foreign Affairs portfolio and being Maori too, she is able to see issues involving the Cook Islands and Pacific peoples in general, through a Polynesian lens; possibly understanding the issues better because of her cultural heritage.

It was noticeable in Manihiki that the two versions of Maori being spoken during the formalities were very very similar; so the Minister’s words and vice versa needed no translation. This was a meeting of Maori to Maori.

On the flight north Prime Minister Brown and I were very lucky to be invited onto the flight deck. I was particularly grateful because for many years I have held a pilot’s licence. In my journalist career I have flown with the air force several times before, but never upfront in a Hercules. I admired the well polished professsional performance of the youngish flight crew.

With two pilots, an engineer, and a navigator; and refreshments including plunger coffee being offered by other crew during the flight, it was like flying in a bygone era. The first Lockheed C130 aircraft flew in 1954. The ones owned by the RNZAF are a bit younger than that but have still given decades of service. They have served in the Antarctic, the tropics and the deserts of the world; but they are still the best in the world for what they do best.

I felt a slight tingle when Manihiki came into view just when the young woman navigator said it would. Our pilot took us down and around to have a look at the runway to ensure there were no obvious hazards in the way; and then we lined up on a long final approach to the narrow coral strip on that narrow little motu.

After a formal welcome we began our tour of facilities. The weather was hot with a stiff dry wind blowing from the east. We visited the Tukao power station, then a landing spot where the danger of miscalculating your approach was all to evident; a local cargo boat was high and pretty dry on the reef. It’s a fate many island trading boats have suffered. This one is likely to be cut up and pushed off the reef into the depths 4000 metres below.

Later we crossed the lagoon in three little boats, the sea was choppy and sloppy.

At Tauhunu on the western shore we were met by a lively band of singers and dancers. There was time for a pit stop and refreshments before we visited other facilities and then gifts were exchanged.

The lunch that followed highlighted the bounty of local foods available on this far flung atoll, and the way in which its people have adapted these foods to their tastes.

There were uto pancakes, uto drinks, fruits, ika mata, paua raw and cooked, unga, crayfish, coconut crabs, there were sweets too, but I’d done my dash well before then and retired from the table.

During the meal we were entertained by the pupils of Tauhunu school in their spotless school uniforms, despite it being school holidays. Their faces beaming as they sang and danced completely confident in their culture. It crossed my mind that Minister Mahuta and her delegation had travelled four thousand kilometres to get to this place. Fortunately the advent of cellphones with cameras means that for a time at least we will have recorded memories of our time there.

After lunch it was time to go. We back tracked across the lagoon. Unfortunately for those of us who took the pearl farm barge, as we headed into the chop the boats low bow butted the waves giving some of us an early shower.

On the way across the lagoon I noticed bouys indicating there were lines below them with pearl oysters attached, but there weren’t as many as I would’ve expected.

Back on the plane the PM wondered whether or not we’d be invited back to ‘business class’ for the trip home. We weren’t. But the flight passed remarkably quickly, and despite leaving about an hour and a half later than scheduled, we arrived back about 12 hours after we left.

Minister Mahuta and her party left for New Zealand on Saturday morning. I admired their stamina. The trip up from New Zealand had taken five and a half hours. It was going to be six and a half back; despite the many virtues the C130 has – and there are many – long distance travel down the back is not high on that list.