Carving a niche in acting 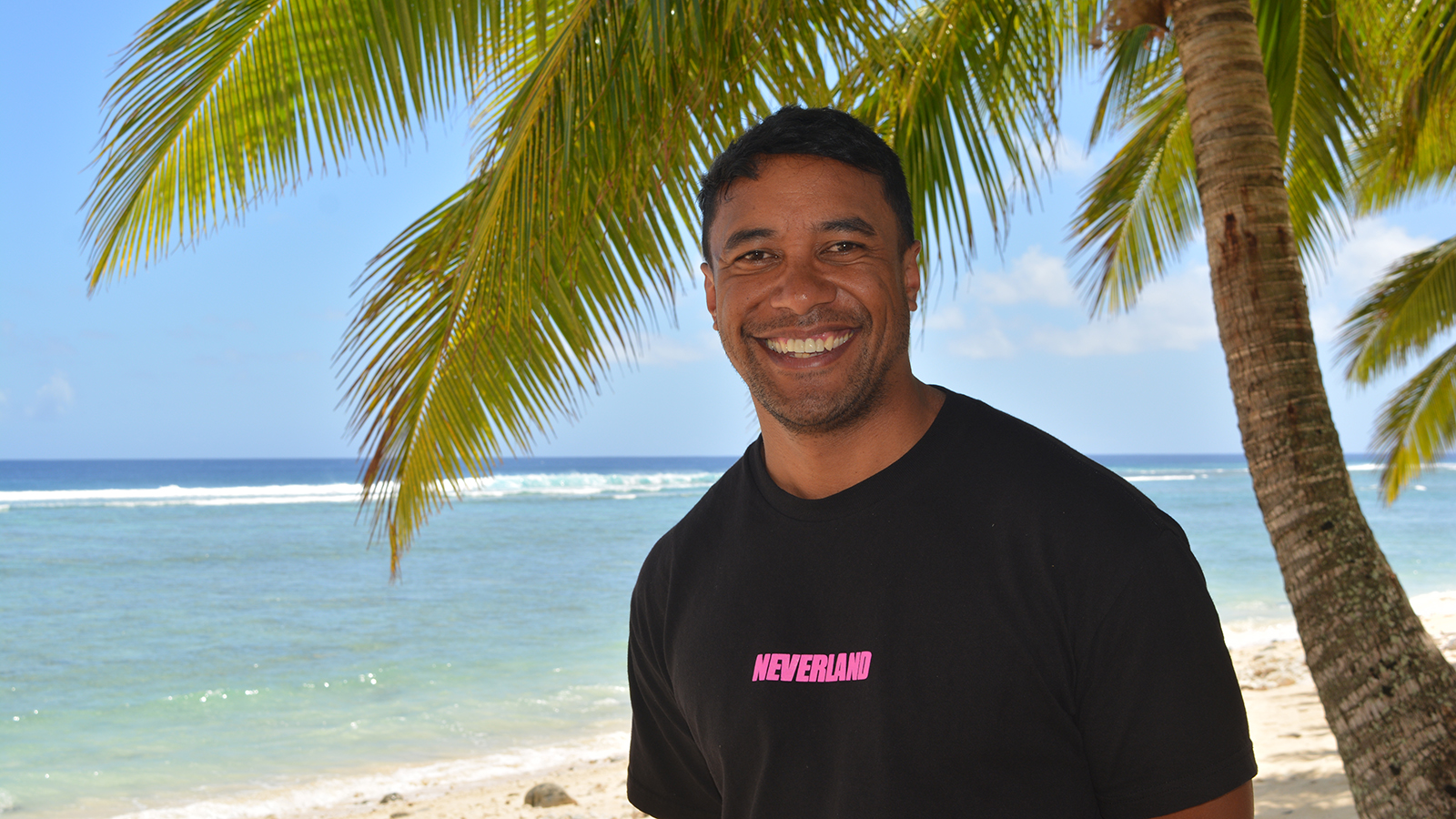 When Dominic Ona-Ariki is not playing Detective Ariki Davis, a Cook Island Māori police officer in the New Zealand supernatural crime drama One Lane Bridge, he spends time discovering himself and his Cook Islands heritage.

Dominic Ona-Ariki first visited the Cook Islands when he was 24 – about eight years ago – for his cousin’s wedding.

Born and raised in New Zealand, growing up in Manurewa, Ona-Ariki considers himself a South Auckland boy but the Cook Islands roots through his Nena and Papa – Kimiora Rua Ona and Teariki Ona of Titikaveka – always had its special place.

“The first time I came here, as soon as I stepped off the plane and felt that hot heat – man, you feel like home. It’s just that feeling I had never had it before … it’s just crazy, I just felt I belong here,” he says.

Ona-Ariki had three more visits since his first trip including a week ago when he was in Rarotonga for his Nena’s birthday.

“It’s the same thing I felt when I was flying over this time, just on the plane just feeling like ‘Ah man I’m heading home’ and you start to reconsider things a little bit … I can probably live here in between jobs.”

Despite playing the lead role in One Lane Bridge which will return with Season 3 later in the year, Ona-Ariki says he has plenty of time on his hands “always waiting for the next job”.

“Most of my work has predominantly been for three to four months maybe five and then rest of the year I’m kind of chilling out like freelancer or actor’s life waiting for the next job.

“I don’t have luxury of picking roles for work … I need a job, that’s it bro, I just need a job whatever I can get until you get to the point where you can pick and choose or be picky but at this point in time, I got to pay the bills man.”

After wrapping up the shooting for Season 3 of One Lane Bridge earlier this year, Ona-Ariki shares his immediate focus was to look for another role.

But he’s not disappointed about not being able to get one.

Growing up in Manurewa, Ona-Ariki never thought of acting as something he would pursue later in life.

He and his siblings were introduced to theatre by his dad, a papa’a who came into the picture when Ona-Ariki was eight years old.

“When he came into my world, he just exposed myself as well as my brothers to opportunities that I don’t think we would have ever, ever thought about or considered growing up and drama classes being one of those,” shares Ona-Ariki.

“Him and mum put me into after school drama class and then from there my drama teacher he saw there was an audition for a film called The Legend of Johnny Lingo which was filmed here years ago.”

Ona-Ariki auditioned for the film which was released in 2003 and scored a part – “it was really small, I was like friend number one or friend number two (of the main character), almost like an extra but I had one or two lines”.

“My parents were like ‘Oh this could work’, so they got me an agent out of the back of maybe a newspaper and from there I got one job, another job all the way up until the point I got Shortland Street.”

Ona-Ariki made his Shortland Street debut in 2007. He played a relative of Dr TK Samuels (Ben Mitchell).

“It was crazy, it’s insane how as soon as your episodes come on TV life changes a little bit, people start recognising you everywhere in New Zealand. Some people would say they don’t watch that show – it’s always dudes aye, they will be like ‘Ah bro, sorry my Mrs watches it’. Whatever man,” he says with a laugh.

“I never had that much money before and it’s not crazy money but for a 16-year-old living in South Auckland, that was a lot of money. I was buying all the takeaways and everything.

“I’m thankful that social media wasn’t around then, we had things like Bebo … I had some great tough lessons back then about having money and the way that you present yourself … just random people coming up to you asking for photos and stuff like that was a bit overwhelming.”

Playing Dr TK’s nephew was a unique experience in itself, he says. Ben Mitchell was an established actor by then and his character Dr TK was one of the favourites among the audience.

“It was a bit of a weird moment seeing someone right in front of you who you have seen on TV but he was great. He really took us under his wings. I was on screen with Scotty Cotter, he is a friend of mine, we have actually come from the same theatre company together. There was a stint where him and I were doing the same job together almost coming as a package deal. He was a bit older than me and he took me under his wings as well.”

After Shortland Street where he spent two years, Ona-Ariki joined university studying business and marketing and advertising because he felt “that was the right thing to do at that time”.

He did marketing job for a little while after graduating.

“I will be honest I was probably s*** at both of those things (business and marketing and advertising). It was an expensive lesson but a lesson that needed to be done and I just figured out that isn’t for me so I went back to the theatre company I was with and kind of had to start from scratch.”

Ona-Ariki hardly received calls for auditions because he had been out of the theatre scene for so long and almost quit.

“I was not getting any jobs and I remember chatting to one of my best mates. He said ‘Dude, if you quit now what was it all for’, that stuck with me forever. I just kept at it – acting or anything – it’s all about persistence.”

And then the opportunity came in the 2019 mini-series Jonah where he played rugby player Eric Rush.

Ona-Ariki then bagged a role in the 2019 film Savage before moving to Australia to play a major support role in Australian sci-fi drama series The Commons.

“It’s crazy how things happen once you start to believe in yourself,” he says. “While I was over in Aussie doing that job, I did this audition for One Lane Bridge and booked it. I finished that Australia job and came straight to Queenstown to start One Lane Bridge – that’s how that came about. Honestly it was just fate.”

One Lane Bridge, which premiered on TVNZ 1 in 2020, stars Ona-Ariki in the lead role as Detective Ariki Davis, a Cook Island Māori police officer who relocates from Auckland to Queenstown.

The character has matakite (second sight), in which he has visions of dead people.

The role was written for someone of New Zealand Māori descent and it was between Ona-Ariki and one other person.

“I’m just really lucky it came my way. They (the makers) were super lovely, I don’t know how hard it was in the background but they were like why don’t we make it a Cook Islands Māori (character).”

Getting into the skin of the character was not an easy part for Ona-Ariki despite the similarities they shared.

“Every season you’re learning more about the character as the character grows but also Dominic, myself as a person is growing at the same time. Its real interesting how you see lot of similarities between the character’s growth and your own personal growth which helps because you can apply that to the work.

“Playing a Cook Islands Māori is a massive honour, massive privilege. I hope and I guess it’s kind of inevitable because when Cook Islanders might see the show and see that Cook Islands being presented on national TV and wherever it airs, they can go ‘Oh well yeah that’s what it can look like’ – it means a leading cop on a New Zealand show doesn’t have to be a white.”

Ona-Ariki has no shame in admitting he’s “plastic as” when it comes to Cook Islands and its culture. But he’s eager to learn.

“I feel really proud to be a Cook Islander and to be at a place that I am now makes me even more proud because I’m plastic as man. It’s pretty evident, I know how to pronounce ika mata but I don’t know how to climb a coconut tree, I just only learnt how to husk it.

“A lot of that is my fault, I could do lot more learning and be more proactive. This trip has actually been great, I have been learning about family genealogy. Sitting next to my Nena having her tell stories, being around aunties and mamas hearing them tell stories, I could sit there for days and listen to them which is funny because being a 12-year-old in that position I would have been like ‘Tsk I don’t want to listen to this’ but as an adult I’m just downloading everything.

“I feel sometimes it’s hard in New Zealand because I don’t really have many Cook Islanders in the mix and you cling onto the closest thing to you which might be Māori, might be Samoan and South Auckland in itself is a culture. But to be here on the land and the position that I’m at, I just feel really proud. If anything, it kind of lights the fire in me to want to learn more about my culture so that when I move along with my career, I have more fruits from my culture to bring along with me and share with the world.

Ona-Ariki’s advice to budding filmmakers and actors is to always reach out for support and opportunities available in New Zealand and abroad.

“Make your own stuff, if you have a phone you’re halfway there. And start writing, even if it is as small as a diary. I don’t know what it’s like in the Cook Islands because kids seem very confident over here. They already have the presence; they are incredibly capable and so watchable.

“A friend of mine shared this to me about what’s the thing that drives you – and he said, ‘My ancestors were too big for me to be too small’. I think our ancestors travelled thousands of miles, the best navigators in the world, they didn’t make this big trip for us to be that small.