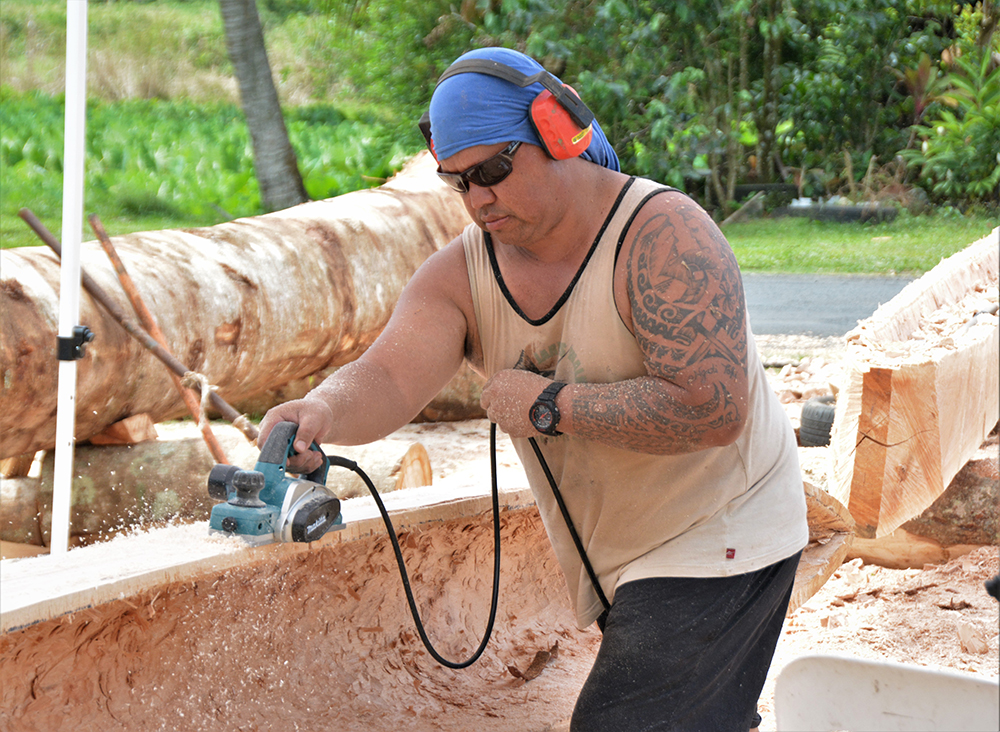 In a bid to revive the art of traditional canoe building, Te Mana O te Vaka boat building and sailing project – a collaboration between the Cook Islands Voyaging Society (CIVS) and the Gallery Tavioni and Vananga – started last week.

The 10 canoes carved from albesia wood measure about 21 feet in length and can each carry three or four people.

Using the albesia tree which is an invasive plant is “not the best, but it’s all we can get,” says Tavioni.

He says the life of the vaka can be prolonged if it is kept in the shade and away from rain.

The outside of the vaka are “planed” first before the inside is done, lessening the chance of putting hole through it.

After sanding the varnish is brushed on using a wood sealer “which is much better since it is not the best wood”, says Tavioni.

Three of the canoes were expected to have the carving completed with the gunnels finished, stern and the front, yesterday.

Ray Tererui who is back on the island is spending his holiday helping out with the build of the canoes.

Tererui would often help out Tavioni when he was building canoes and enjoys learning more about the art.

“I enjoy it, it’s good and part of our traditional fishing methods,” he says.

Tavioni’s wife Awhitia is also a master carver, and along with two ta‘unga artists James Mani (Mauke descent) and David Maruariki (Mangaian descent), the three teach the student carvers and assist with the project.

Both men Mani and Maruariki started carving with the Tavionis in the early 90s at 12 years of age and have travelled with the couple to vaka festivals in Hawaii from 1999 to 2006.

The Cook Islands Tertiary Training Institute – Faculty of Hospitality and Services students are building two of the canoes. During the building process they will be learning how to make sennit, paddles, etc.

In the first part of the project the canoes are being built representing each of the islands. They will then be handed over to the care of the Cook Islands Voyaging Society, says Tavioni.

The second part will involve people from the Pa Enua who want to make a canoe – “they can come along in a group and make one for their own island”.

Towards the end of the canoe carving project, Tavioni will invite fishermen to talk about fishing using traditional methods with moon and tide and fishing equipment.

Tavioni is passionate about the local fishing competition using a traditional hook which is scheduled to take place after the completion of the second lot of canoes.

He believes people are not fishing in canoes because there are none available.

“I want people to go and fish reviving out traditional ways, the reason is to show people that you don’t need petrol or a big boat to go fishing to feed your family.”

Earlier this week Papaaroa Adventist School students visited the carvers with each taking turns to use the adze to carve out wood.

After the school holidays the student will return to make their own canoe.

“I hope other schools will also come along and make their own canoes,” says Tavioni.

In July coconut husks (puru) were collected and beaten before being buried (to speed up the decomposition process) in a long deep trench at the beach for some months to give it time to ferment.

During the week the canoe building team dug up the puru from the beach and began separating the fibres for the intricate braiding of the fibre into rope.

She is excited to be here to participate in and share her knowledge and to learn from the likes of Awhitia Tavioni about the Cook Islands making of traditional rope.

Te Mana O te Vaka project is made possible with funding provided by the New Zealand Ministry of Foreign Affairs and Trade (MFAT), European Union, Government of Sweden as well as the University of the South Pacific (USP) with the Pacific European Union Marine Partnership programme.