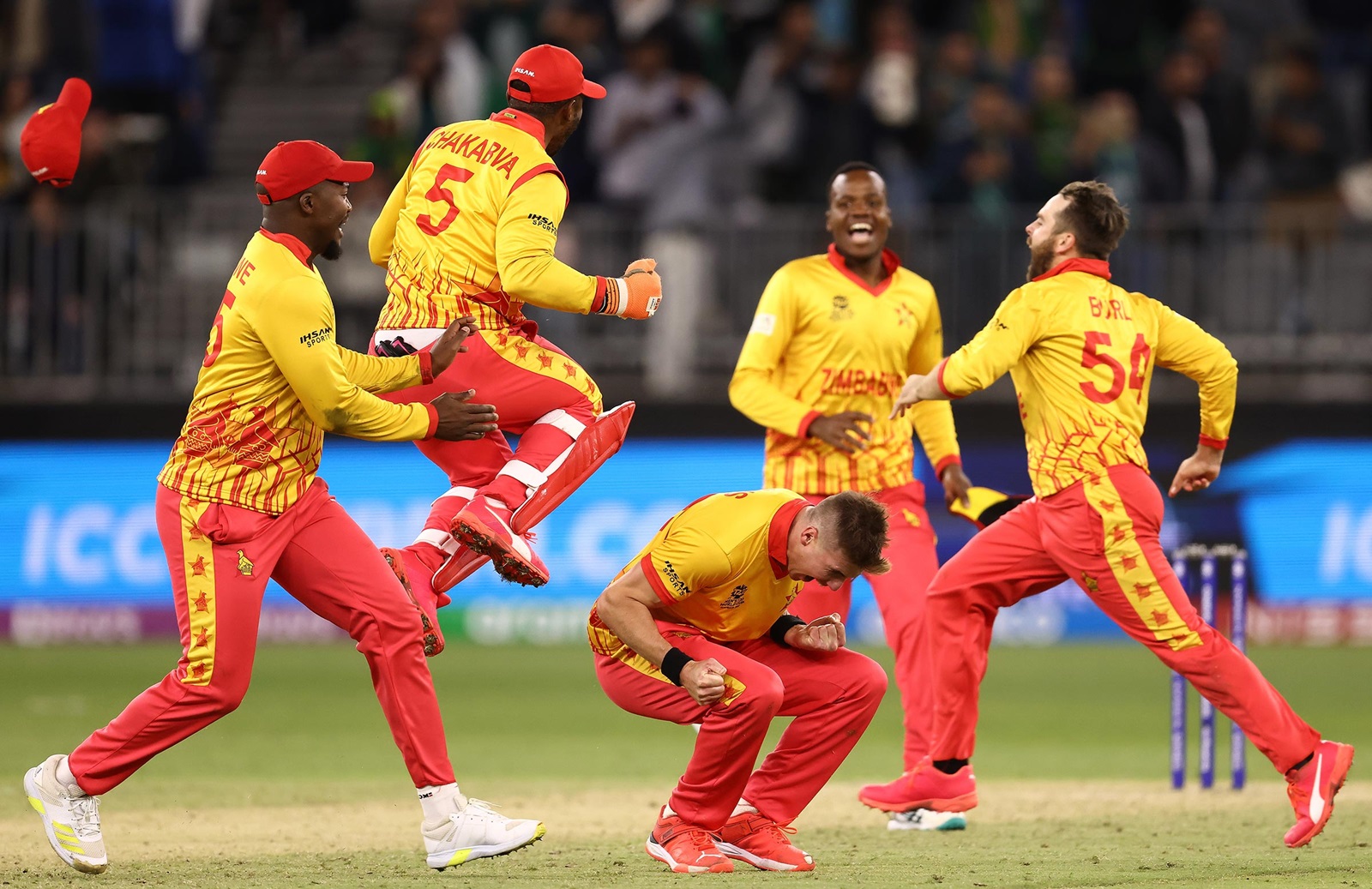 Zimbabwe pulled off one of the great T20 World Cup upsets by beating Pakistan in a match decided by a run out on the final ball AAP/cricket.com.au/22102711

The upsets keep coming thick and fast at the T20 World Cup in Australia with Zimbabwe winning a nail biter against Pakistan in Perth. In Sydney though it was business as usual with South Africa crushing Bangladesh and India cruising past Netherlands. Cricket analyst Rahul Patil looks back at all the action from Australia.

After missing out on two points against Zimbabwe due to rain, South Africa made a statement against Bangladesh and put all other sides on notice. Batting first they annihilated the Bangladesh bowling attack. The destroyers in chief were Riley Rossouw (109 of 56) and Quinton de Kock (63 of 38) who put on a whirlwind partnership of 163 runs in 85 balls to help South Africa set Bangladesh a massive target.

Chasing 206 to win Bangladesh were in the game for a brief period at the start but once the opening partnership was broken a procession of wickets followed and Bangladesh were all out in the 17th over for less than half of South Africa’s score. Their batters could neither come to terms with the pace of Anrich Nortje (4 for 10 in 3.3 overs) or the spin of Tabraiz Shamsi (3 for 20 in 4 overs) giving South Africa a much-needed win in the group.

A loss by 104 runs is gigantic in T20 cricket and Bangladesh will need to work on all three facets of the game if they are going to be competitive in their remaining matches. South Africa on the other hand with three points from two games and a fantastic net run rate are looking good in second place in Group 2.

India vs Netherlands - India won the toss and batted first.

Three Indian batters notched up 50s and all three in contrasting fashion. Rohit Sharma initially struggled to time the ball, received a lifeline when Tim Pringle dropped him on 13 and then made Netherlands pay by adding a further 40 runs with some clean hitting. Virat Kohli started in his trademark style picking up ones and twos and then unfurling some tremendous strokes towards the end of his innings.

The star of the show though was Suryakumar Yadav who came in to bat at the end of the 12th over and immediately provided the much needed impetus to the Indian innings. ‘SKY’ as he is affectionately called bats in the middle order and it is not easy to come in and start finding the boundaries from ball one. But he is currently in such tremendous form that no matter when he comes in, what the pitch is doing or who is bowling, SKY quickly gets into his stride and delivers for Team India.

Chasing a target of 180 to win, Netherlands were never really in the hunt. Bhuvneshwar Kumar gave the Dutch a ‘swing and seam’ bowling masterclass and picked up a couple of wickets for only 9 runs in 3 overs. Spinners Axar Patel and Ravichandran Ashwin too bamboozled the batters with their guile and picked up a couple of wickets each. Netherlands only managed 123 in their 20 overs giving India the win by 56 runs. India now sit at the top of Group 2 with four points from two games and a healthy net run rate.

Pakistan vs Zimbabwe - Zimbabwe won the toss and batted first.

This tournament has had a few upsets so far. First Namibia beat Sri Lanka. Then the West Indies failed to qualify for the Super 12 stage. We then saw Ireland beat mighty England in a rain affected game but Zimbabwe beating Pakistan in Perth has to be the biggest one so far.

The Pakistan bowlers did a great job restricting Zimbabwe to a well below par total of 130 on a fast and bouncy Perth wicket. The ever impressive Mohammed Wasim (4 for 24 in 4 overs) and leg spinner Shadab Khan (3 for 23 in 4 overs) shared the wickets with some accurate bowling.

What should have been a regulation run chase for Pakistan turned out to be a nightmarish one. Openers Babar Azam and Muhammed Rizwan failed for a second game in a row. There has been a lot of talk about how Pakistan is too dependent on their openers and that their middle order is not good enough. This was a golden opportunity for the middle order to prove their worth. But exactly the opposite happened and through a combination of good bowling, poor shot selection, poor game awareness and pressure Pakistan crumbled and lost the game by 1 run.

I had said previously that after the gut-wrenching loss to India in their last game Pakistan will find it really difficult to mentally focus on the next game and it showed against Zimbabwe. Pakistan will now need a miracle to make it to the semis from here on whereas Zimbabwe live to fight another day.