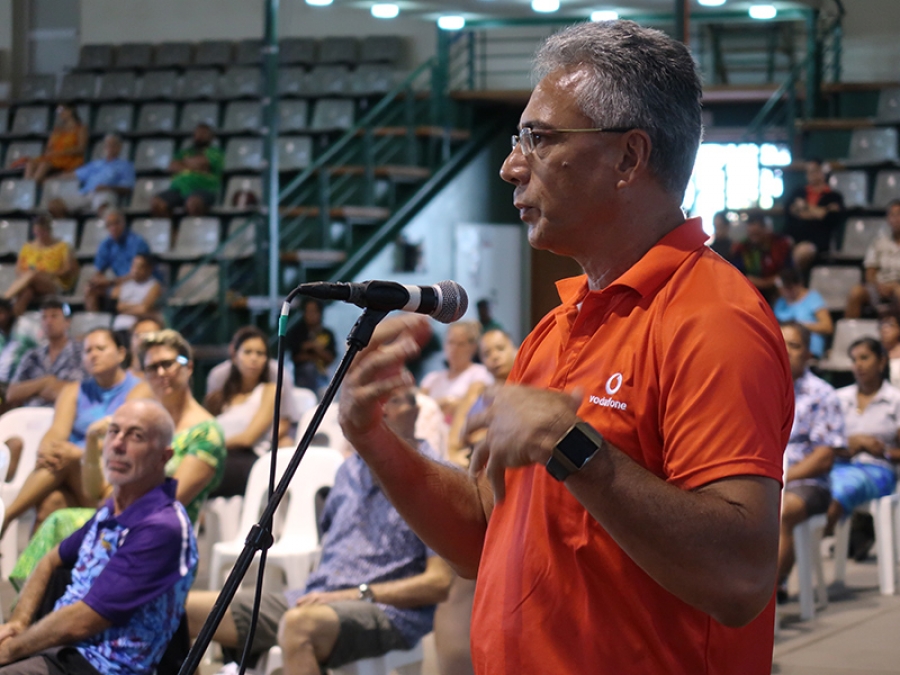 Vodafone boss Phillip Henderson says the increased data plans are in anticipation of this being activated “within the next few days”. Photo: LOSIRENE LACANIVALU / 20031733

The company launched its new data plans across all its internet services after signing an agreement with Avaroa Cable Limited for internet connectivity on the Manatua cable.

However, the international leg of the cable and additional internet capacity is not immediately available. Avaroa Cable Limited is finalising upstream cable arrangements to connect Manatua Cable to the rest of the world.

Vodafone’s chief executive officer, Phillip Henderson says the increased data plans are in anticipation of this being activated “within the next few days”.

With their new plans, Henderson says every customer, whether prepay or postpay, will get more data to use for the same spend.

Vodafone Cook Islands is the first customer to use the Manatua service commercially.

Henderson said this means they can now leverage the improved performance that the cable system promises to deliver better customer experience.

With weeks of testing completed, the telecommunications company is waiting for the green light from the cable to switch on commercial traffic in Rarotonga.

When that happens, it will be a matter of “flicking the switch” to turn on the additional internet capacity on the Manatua cable system, Henderson said.

“The future is exciting, and we are ready!”

An increased data cap means he can spend more time talking to family members who live overseas and researching as part of the cyber security course he is doing at the University of the South Pacific.

At a “troubling” time when money is tight for many people, Rod Henderson said the increased data caps will be a welcomed relief.

“Sometimes we are critical of Vodafone for whatever reasons, but we don’t know the facts,” he said.

“This is great value for money and I won’t have to worry about using excess data.”