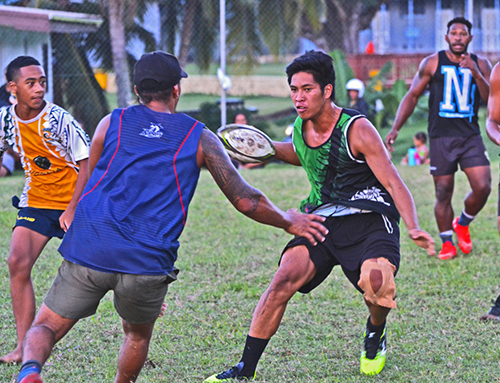 It was a perfect afternoon for the Vodafone Cook Islands Open Touch finals starting with the third-place playoff followed by the open women’s showdown between the unbeaten Nukz Power and FBI.

The Nukz Power women came out strong and scored the first two touch downs before FBI managed to break the Nukz Power defence and cross the line to get points on the board.

With Nukz Power in the lead 2 -1 FBI kept up and made its breaks but were unlucky in converting those breaks into points.

Sticking to their game plan, Nukz Power held on to their lead and ran out winners comfortably with six touch downs to FBI’s two.

Cook Islands Touch president Daphne Brown said: “It was a perfect finish for Nukz Powers 2021 touch campaign. A well-deserved win to a great side.”

The Vodafone men’s touch final was open for either GAT or Team ATT to own.

GAT quickly got into the game and looked to be dominating and holding a pretty good 3-1 lead. But a tenacious Team ATT fought back and levelled the match 4-all.

The game automatically went into a drop off to determine a winner. It was Team ATT that snatched the point with quick hands to their winger who grounded the ball in a nick of time before the flying GAT defence touch him. Team ATT claimed the Vodafone Cook Islands men’s touch title, winning 5-4.

Brown said: “It has been an excellent touch season for Nukz Power starting off with their under 16s winning the beach touch competition at the Cook Islands Beach Games earlier this year followed by winning the 16s and under touch season competition.”

“The mighty arrow also performed well in the open competition winning the Vodafone women’s unbeaten and runner up for the Vodafone Mixed Comp.”

Cook Islands Touch thanked Vodafone Cook Islands for its support and prizes for the season competition as well as Te Aponga.

“We thank the referees for their hard work.  We look forward to the Youth Games and our Te Maeva Nui one day tournament.”