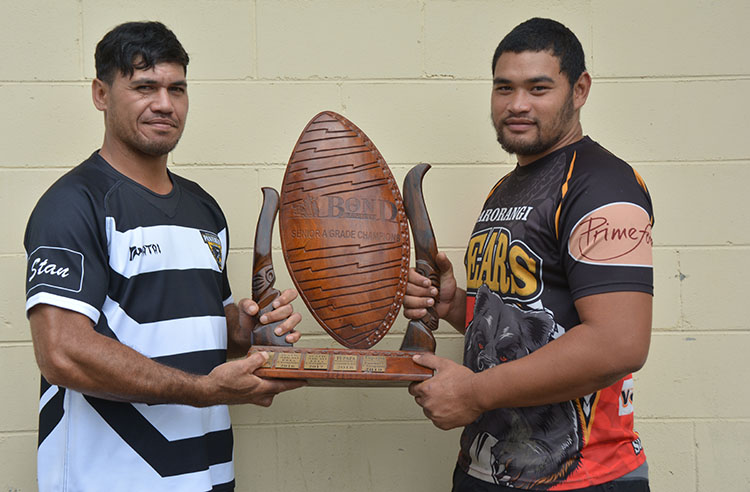 Tupapa Panthers captain Thomas Toa, left, with his Arorangi Bears counterpart Tanire Mokoroa pose with the trophy their teams will be battling for this afternoon. ALANA MUSSELLE/21090101

The senior A grade rugby finalists, the Tupapa Panthers and the Arorangi Bears are sticking by the term ‘champions adapt’, as they get ready to battle in today’s domestic rugby union competition final which was postponed last week due to poor weather.

An intense battle between the Panthers and the Bears is expected in the Senior A final of the Rarotonga Club 15s competition at 4pm at Victoria Park in Tupapa.

The two teams have met twice this season with the Panthers winning the first match 27-3 at Victoria Park and 5the Bears taking out the second one 21-15 at Raemaru Park in Arorangi.

The Panthers are gunning for their fourth win in a row while the Bears are hoping to win their first Senior A title in a decade.

Ben Koteka, development manager for Cook Islands Rugby Union, said that the delay in the games hadn’t caused any issues. Instead it has given the players more time to breathe and prepare better for the showdown.

Darren Piri, coach for the Panthers, said: “It was a bit of a bummer that we didn’t have the game last week, still preparation has remained pretty good and everybody is looking forward to playing and enjoying the game (today).”

The Panthers had their last training session of the season on Thursday where they gave the last bit before they would lay it all out on the field for the big match today.

“The extra bit of training we got because of the delay doesn’t change anything,” Piri, who felt the Panthers were ready regardless, said.

Mark Te Kani, one of the Bears coaches, says the postponement of the game due to bad weather should have helped both teams prepare well for the dry condition expected in today’s final.

Te Kani, who coached the New Zealand Navy team in the North Harbour and Northshore rugby systems, joined the Bears at the beginning of the 2021 season.

“I think the attitude of the players, they are more focused around playing the game of rugby. It took time for them to transition from league to rugby union and we hope they carry that momentum into the final,” said Te Kani while explaining their emergence in this year’s competition.

The Bears comprised mostly of young players guided by a couple of senior reps.

“Throughout the season as coaches we focused on putting together a good system which players are able to understand and adapt to and I guess with the continued coaching of that system the players have become used to it.

“We have beaten them on two occasions, including last year and this I guess instils in us that they are a team that can be beaten but to do that your team has to turn up on the day.”

Te Kani said they had a successful season with the club fielding in many teams through the different age groups “which shows the strength of the village”.

“For us coaches, it has been a privilege to be coaching a good bunch of young men.”

Ben Koteka said: “I pray that both teams will play well, empty the tank and we will all witness a great game of rugby and everyone’s goes home happy!”